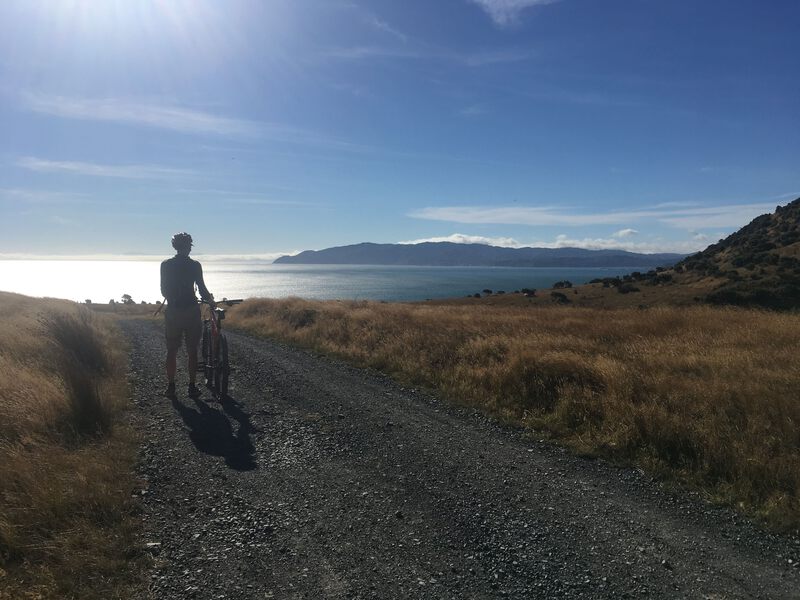 The weather forecast was for a warm dry day, with North Westerly winds decreasing. Good enough to go!

With an early 06:45am meet up at Wellington Station we left on the 07:05 train to Upper Hutt, the first train out on Sunday. It was a short train and the number of bikes was officially limited to three, however the kind guard allowed us to stow the fourth bike in the wheelchair area. Something to be aware of with larger groups. By 08:00am we were on the road cycling up to Maymorn and from there through Pakuratahi Forest Park to the Kaitoke Loop Road and the start of the rail incline. There were a few short hill climbs to get to the rail incline but once there, it was an easy pedal up to the Summit Station area.

Once through the 600m Summit Tunnel, the rail track bed became more steep and a rougher descent to Cross Creek. Cross Creek is a good campsite for an overnight trip with water from the nearby stream, but we pressed on.

Once out onto the Western Lake Road, it was about a 30km pedal down to Ocean Beach. The wind was still strong but fortunately had not changed from the NW direction so it was mainly side on for that leg. About half way down to the sea, we stopped under a shady tree for a 45 minute picnic lunch of bacon and egg pie kindly baked by Garth. Having cut his pack weight and increased our own stomach weights we continued on through the Wairarapa heat.

Just before Wharakauhau we had the longest road climb of the trip, about 80m elevation over a 1.5km stretch.

From there it was a short quick descent to the track along Ocean Beach. There were a few sandy patches and short climbs where bike pushing was the only option, but for most of the beach track the gravel was substantial enough to pedal.

By that stage we realised that plan A of making the 5pm Eastbourne ferry was not going to be feasible, so we set a relaxed pace with plenty of stops to enjoy the views and the cooling sea breeze. The wind strength dropped over the day, so the later finish meant the headwinds on the final stretch home were not too strong.

Garth’s plan B worked well with us leaving our bikes at his daughter’s house in Days Bay for later pickup and catching the (last) 8:30pm bus from Eastbourne back to Wellington.

The length of day reflects that some of us (me) aren’t regular cyclists and leg power flagged in the afternoon. Nevertheless, it was a very enjoyable day and the conditions were almost perfect. For future trips there are a few logistical points to note:

1 thought on “Remutaka Cycle Trail In a Day”