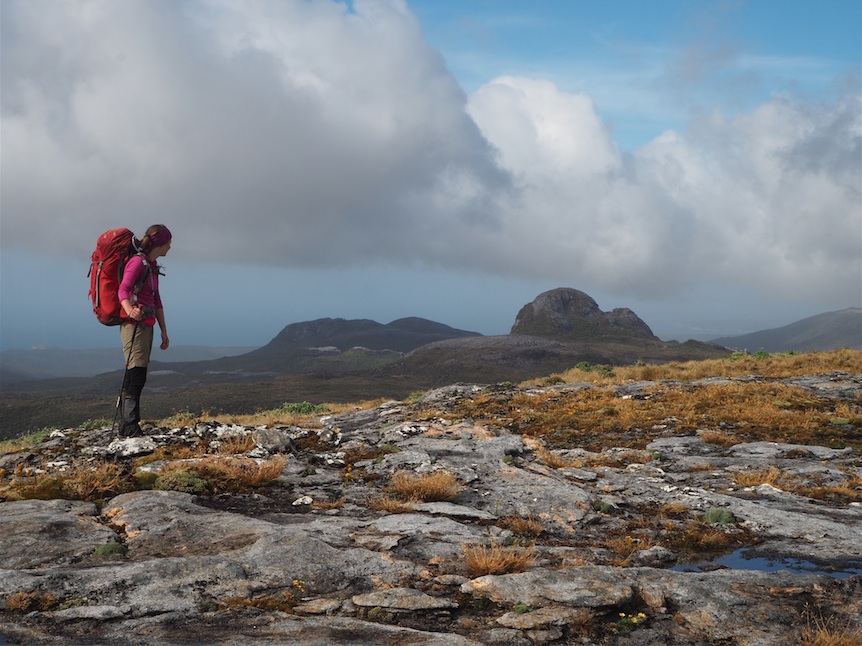 This was not a WTMC trip but I thought the notes might be generally helpful to other WTMC members. We researched this trip thoroughly as the first two days do not have any maintained tracks. It is some of the most remote tramping you can do in New Zealand, and, whilst not all that high, the Tin Range is “not to be underestimated” (as a local hunter put it). I will not give a full route description here, but for others wishing to do this route I refer you to Debbie’s excellent article in the 2016 WTMC Journal. That article pretty much contains all the detail on the route you will need. You should also read Megan, Tony, Kate and Illona’s article in the 2011 Journal which not only describes a traverse of the Tin Range but also a two-day bush bash from Gog and Magog across to Port Pegasus. During our trip research phase, Gareth read me the section on the bush bash from the later report to which I said “No…..just No”, and he didn’t push it any further.

Having settled on a Tin Range adventure without the Gog/Magog extension, we arranged a boat from Bluff to Port Pegasus. You need to link up with someone else going to the same place, because this is a 4.5hr trip and a sizable boat is required. A charter will cost around $3000. We were lucky because there was a large family group already going into a hunter’s hut down there, so we could share their ride for a good price. After they had loaded up their considerable gear (2 small boats, picnic tables, chairs, scrabble, kites, food, beer, guns, and grandma were all loaded on the big boat), we hopped on with our backpacks and departed at around 9.30am. It was calm. And you have no idea how glad I was about that. After depositing the family at their beachside hut, our skipper took us on a wee tourist trip to Belltopper falls before depositing us at the end of the Surveyor’s Track on the North Arm of Port Pegasus. We had done considerable research to find out which was the best way up: the Old Surveyor’s Track or the Old Tramway from Diprose Bay. Rumour has it that both are now good, but our intel suggested we should try the Surveyor’s Track. After exploring the remains of the old hotel site, we set off up the track at 3.30pm. It was a great track, much better than we expected, and better than a lot of maintained tracks. Someone has been maintaining it, but no one we spoke to knew who. We made good progress to the campspot at the dam and arrived by early evening. There were good views of Gog and Magog and Port Pegasus on the way. We were surprised to find a group of four who had just come along the Tin Range already camping at the dam. In light rain we pitched up.

The next day we awoke to strong winds. Climbing up onto the ridge, we realized just how windy it was. I can’t really describe how frustrating it was. It was energy sapping to battle against it. It was at the upper end of what you could walk in, and every time you lifted your foot you were blown off course such that you stumbled around like a drunk falling over the scrub. We were bitterly, bitterly disappointed because we had been anticipating this trip so much. With the low cloud there was not that much of a view. Gareth insisted on going to the very end of the ridge to get the ‘view’, so we spent an hour doing that, before heading along past the spot height, granite knob and then over the shoulder of Mt Allen. There were sections with a faint trail and a few cairns, and sections of nav through low scrub. We arrived at the Mt Allen tarn at around 2.30pm. There is a small camp spot there. It was a bit boggy, but relatively sheltered and fairly flat, so we called it a day and pitched up. Despite the shelter it was still extremely gusty and I was concerned our 17 year old Macpac Minaret would stand it. Gareth assured me that the tent was ‘living its dream’. What you should understand is that our Minaret was purchased in Covent Garden in London, and that is about as far as you can get from the top of the Tin Range in every possible way….. I’m not sure this Minaret ever realized it would one day get to live out its dreams in the New Zealand Wilderness. It was built for this, and was in its element. 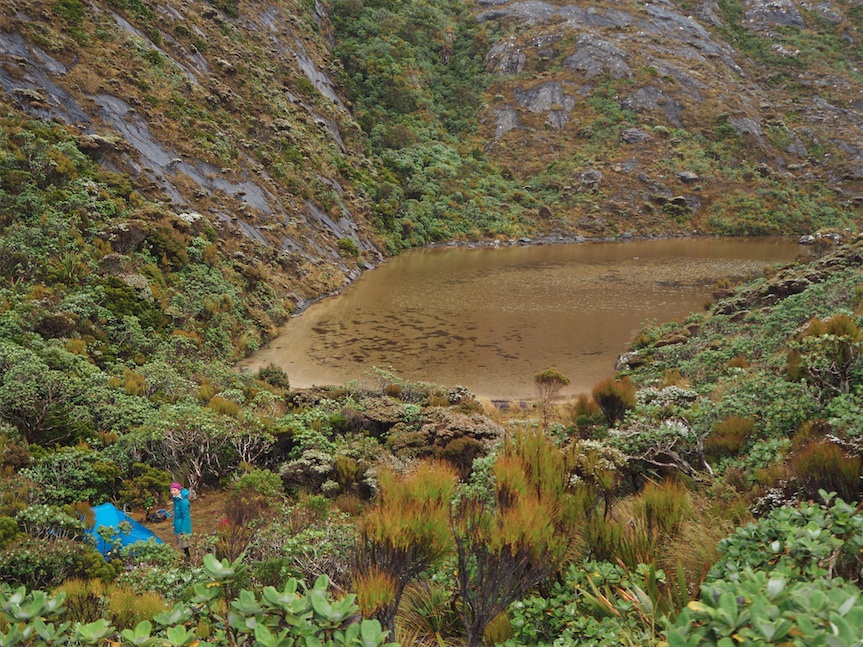 Indeed, it was a very windy night and the Minaret was constantly buffeted, however we were amazed to get a surprisingly good night’s sleep. When we awoke it was much calmer. We left at around 9am, just as the cloud was clearing and we were treated to some wonderful views. There was a light trail to follow, but we lost it a couple of times and we were glad we had researched the exact location of the route. By 10.30am we were at the Kopeka River Campsite (Read Debbie’s Trip report or speak to one of us for exact location). From there the foot trail to Blaikies Hill was more distinct and marked with loose cairns and standing sticks. Spotting these markers was a bit of a skill, and you definitely needed to know where the trail was headed in order to spot it amoungst the scattered rocks and scrub of the mountain top. In general the broad tops were easy to walk along, with just the occasional section of waist high scrub. It was warm and sunny with just a light breeze: such delight! Such a contrast to yesterday! The views of the granite knobs of the Tin Range were great, but we could also see down to Doughboy Bay and then back to Gog and Magog. We had lunch on Blaikies Hill at around 1pm. From Table Hill we got a view of the Paterson Inlet, Mt Anglem and the Ruggedy Range. This area is breading ground to the Southern NZ Dotterel, a critically endangered bird. There were several around and DOC have a monitoring area here. From around 2.30pm we started to head down off Table Hill, finding a trail by the central of the trident of streams coming off the North of Table Hill. Again, this is not maintained, and it was fairly overgrown, but became easier as we descended. We reached the southern circuit track at 7.15pm. We suspected Rakeahua Hut would be busy so we found a campspot in the bush beside the track and this is where we saw in the New Year. There was great birdlife; loads of kakariki, bellbirds, tuis and fantails. Even some kiwi footprints in the mud, but we didn’t spy the elusive birds themselves.

From there we made a pretty standard trip around the Southern Circuit: We took one day to get to Doughboy Bay (7hrs), another to get to the old homestead at Mason Bay (6hrs), a third to walk to Freshwater and to go over the Thompson Ridge (8hrs), and a final day to walk from the North Arm of the Paterson Inlet to Oban (4hrs). It was busy on the Southern Circuit Track, so we continued to camp, usually away from the huts to maintain our feeling of peace and quiet. At Mason bay we saw a plane land on the beach, and camped outside the old woolshed, where we caught a glimpse of a kiwi at night. From Freshwater Inlet we crossed the knarly tack over the Thompson Ridge and found a beautiful camp spot in the bush just where the track meets the north arm of the Paterson Inlet (close to a mini peninsula). From that campspot it was just 1.5hrs to the North Arm great walk hut, and from there only 2.5hrs out to Oban (great walk track time = 5hrs!). We had two nights in an Oban bach at the end; to rest and recuperate and readjust to civilization (in addition to giving us time to enjoy the delightful fare offered at the South Sea Hotel).

Summary: The Tin Range is a great adventure for intrepid trampers who want to get off the beaten track. You need to research the route and have good gear. It can be extremely windy up there! There are no maintained tracks, and no official markers at all – you’re on your own with the route finding. If you have more time, and the boat logistics are too much for you, you could do a there-and-back-again to Port Pegasus from Rakearua Hut, which would take 4 days. Please be sensitive to the fact that the open tops of the Tin Range are one of the only breeding grounds to the Southern NZ dottrell and do not interfere with DOC’s work in the area.