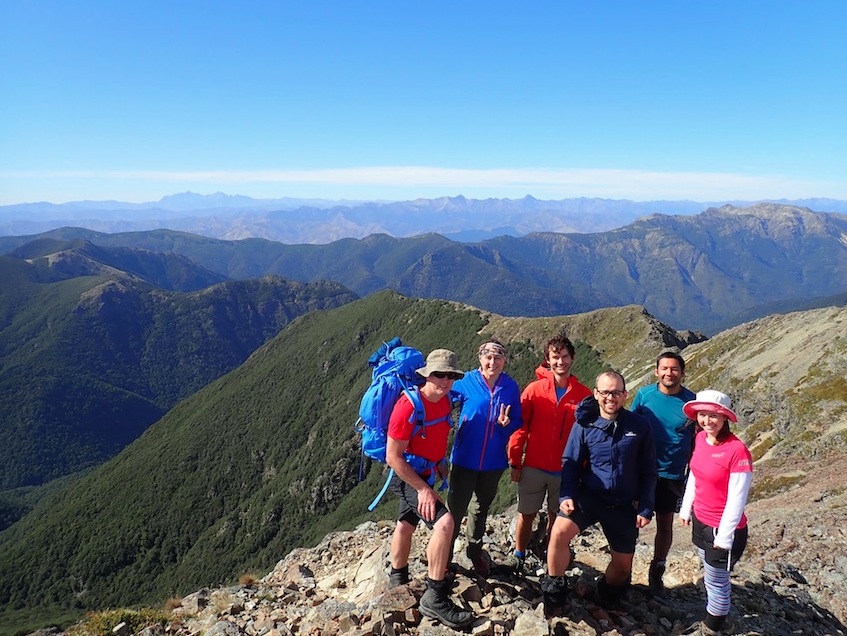 We had a good group of people keen to get into the Richmond Range and do some reconnoitring over the long Wellington Anniversary weekend. Having recently come out of a mission to Carkeek Hut (and beyond) I was still a bit sore but keen to get into this great part of the south island, having explored around and up Mount Richmond itself a couple of years ago.

Things went comparatively placidly and we got to the ferry on time and we made it over to the good island. I was a bit hazy about the direction to take in the rabbit warren of roads to take to get to Top Valley Road, where our walk started, so a few erroneous diversions took up some time. By about 11pm we arrived at a seemingly long-relinquished and abandoned campsite at Jubilee Flat, which provided a nice restful night in our tents to start things off. The other group then took off in the van to get to St Arnaud.

The start of the track to The Forks was easy to find the next day and after using the separate old-school “mens” and “ladies” longdrop toilets (seriously!) and filling water bladders in the river, we headed off in the heat, being perpetually molested by clouds of sandflies. At around Top Forks we were then dive-bombed by a combative pair of squawking NZ falcons defending their nest – a truly formidable and wondrous sight. 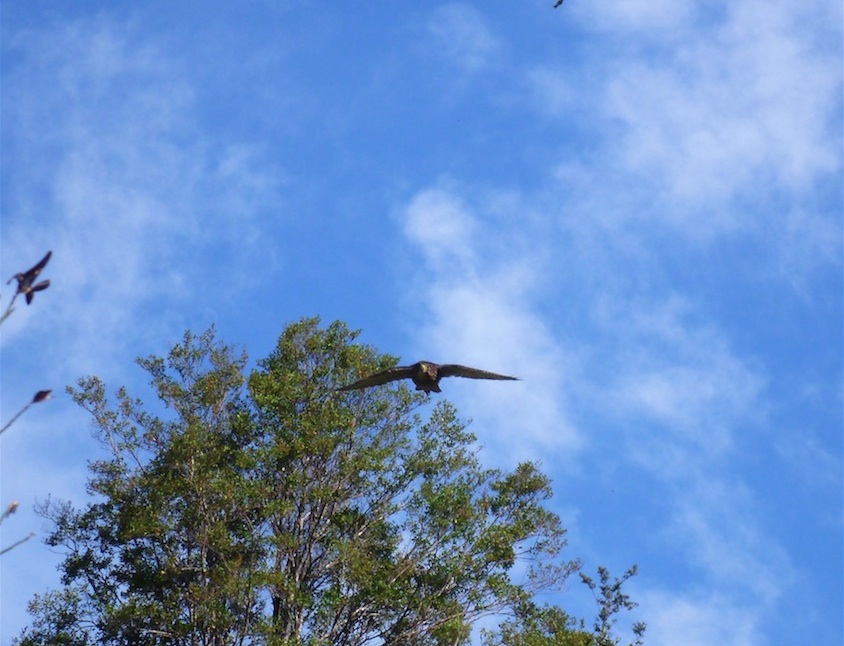 The sidle track from The Forks up to the main track to Old Man (meeting it at pt 1309) proved to be most onerous in the heat and we slowed down here a bit. Abundantly-loaded packs made the 700m uphill at the end a bit of a struggle (an invigorating waterfall mid-trip was a life-saver!) 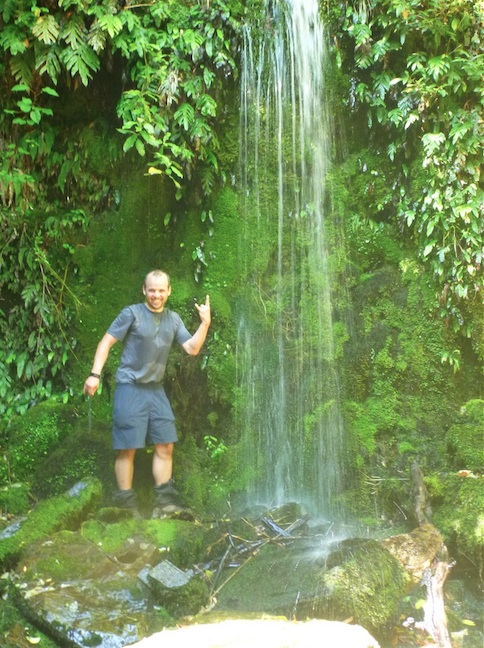 Once on the main track to Old Man, the inclination smoothed-off a bit, but the wind heightened. It was blustery on Old Man proper and we could see the track extending off to Slaty hut in the distance. We headed along the ridge towards Old Man hut (we only spotted one TA walker coming the other way the whole day). 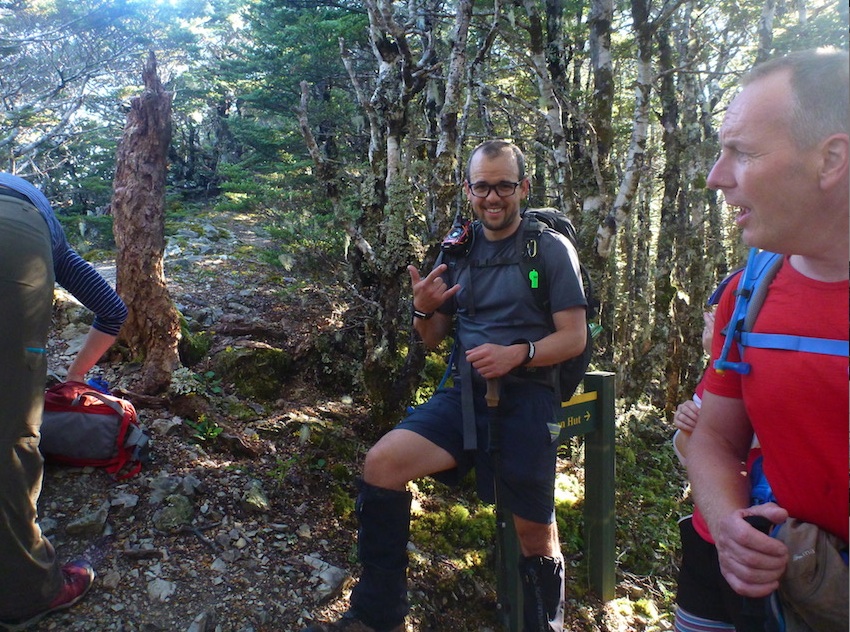 The final approach to Old Man hut involves a 200m drop, but it is worth it. The hut is in a spectacular clearing in the bush which we reached after an approximate 9.5 hour-day. The hut was full (apart from one bunk) and most of the team setup outside. Also at the hut were two older ladies who reckoned they were heading for Rintoul hut the next day, to end up at Tarn hut (also our plan). However they also advised that Rintoul hut had no water, this wasn’t advised on the DOC website prior, and was in palpable contrast to the categorically two large water tanks at Old Man hut. This fact (as well as fairly slow progress that day) made me re-evaluate our archetypal plans.

We had a great dinner and the wind culminated that night, shaking the hut (and the tents more). However we weren’t blown away and the wind was still turbulent on Sunday morning. On the journey down to the hut the preceding day we had stepped over gargantuan branches and whole trees that were felled by the wind above the hut. The next morning I heard at least 5 separate loud CRASH! – BANGS! as the wind smashed more old branches to the ground. This was pretty incredible.

The loose “Plan B” that I formulated had us going down from Old Man hut to Mid Goulter, then Lower Goulter huts, then out via the track and 4WD road. The other substantial preference to this plan was that these huts weren’t on the TA. But first we decided to get some prominence by climbing Mount Rintoul. The last section would have had us get to pt 1643, then descend 200m, then ascend to 1731 for Mt Rintoul proper. Once I saw the precipitous scramble involved in parts of this perambulance (and given the mix of abilities in our group) I was happy we weren’t going up this (and down!). Getting to pt 1643 was still a definitive experience, giving miles of unfettered and open views in every direction (Old Man hut could be seen in a now-miniscule clearing below us). 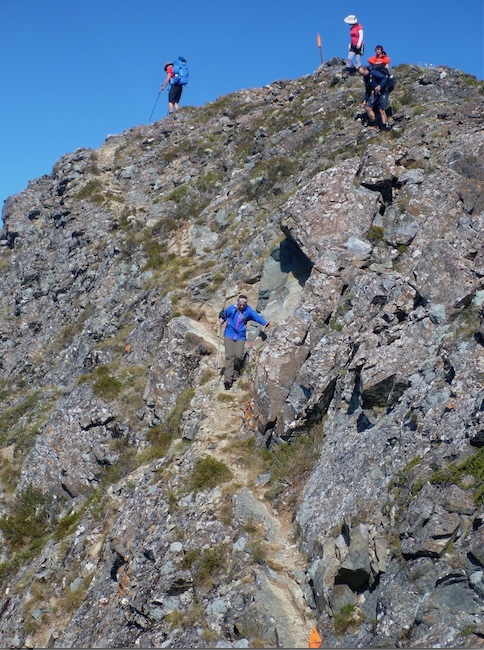 It took no time to drop back down to that hut, and once there we re-packed all our paraphernalia and took off for Mid Goulter hut. This was again, a peregrination that involved some rocky and rooty travel in places. It was also another disconcertingly hot day. I had an entertaining encounter with a juvenile goat on the way down who first looked a bit discombobulated, then shocked, once he realised I wasn’t his mum. Going hut to hut took us approx. 5-6.5 hours, and once there we had 8 bunks to ourselves by the river. The hut was nice and cosy and tidy, with a toasty deck facing the still-incandescent sun. 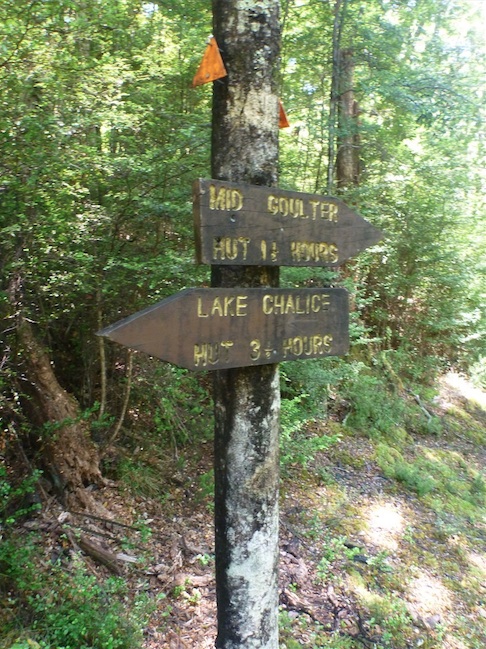 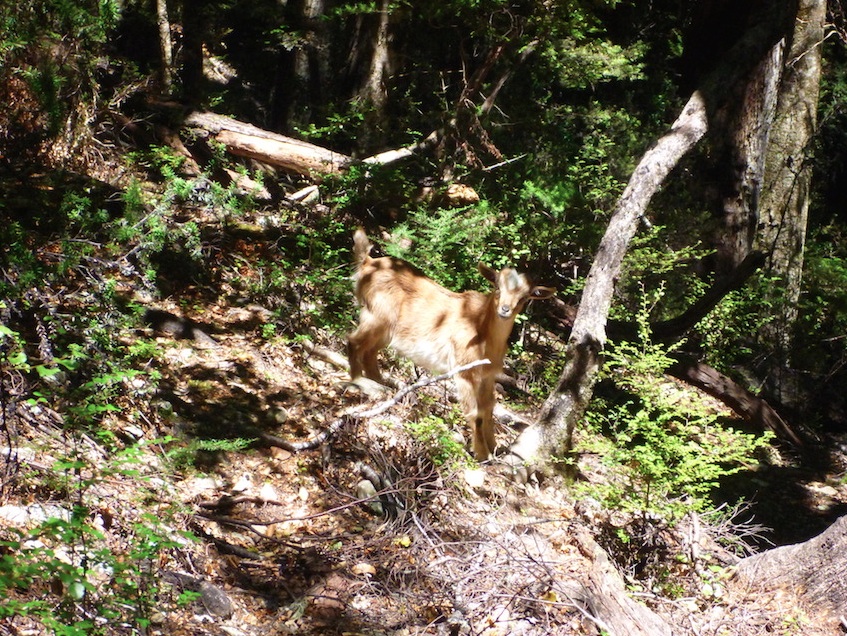 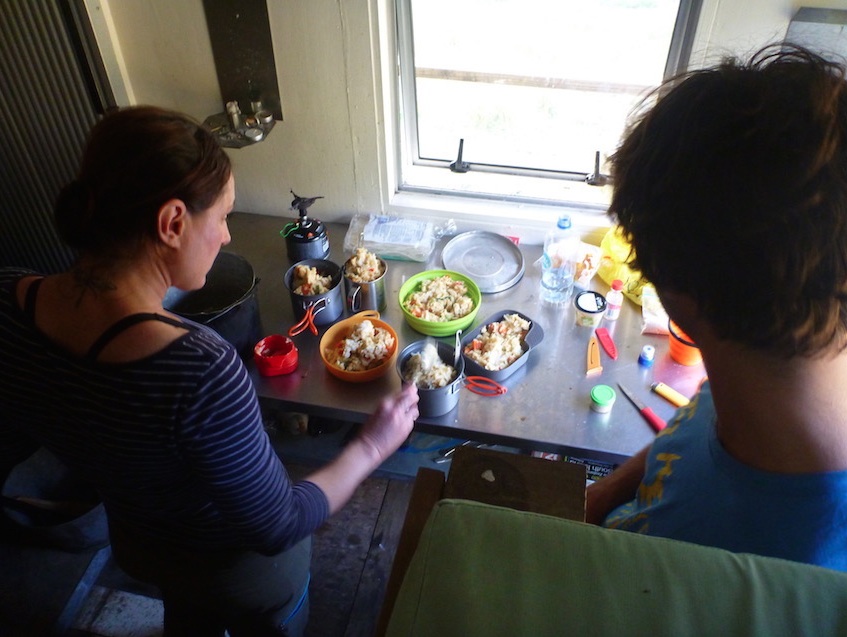 After dinner we went to sleep to prepare for the most uncomplicated day on Monday. It was approximately 40 minutes to the first road-end then another 2-odd hours of road walking to get to the road-end where we were scheduled to meet the van. As we hadn’t done our Plan A, we had a few hours to wait for it.

We had a look at the Wairau River to consider the potentiality of crossing it (as this would take us straight onto SH63, and remove the 1.5 hour-odd return trip to get in and out of). However the river was flowing solidly in one deep, murky and agilely-flowing channel, so that option was discarded. We returned to wait by the road and finished off the last of our food.

The other group was able to get us by around 3.00pm, which was great. So we had time to hang around in mighty Picton for a bit (which was also torridly-hot). The ferry trip back was a blast. This was an at-times confronting and most definitely fun trip, in an amazing and relatively undisturbed part of the country. Thanks to all who took part. It has unequivocally made me keen to get back and tackle these routes and huts next time around!

P.S: If you can tell me how many unnecessarily large words are in this report, you get a free gluten-free tararua biscuit!