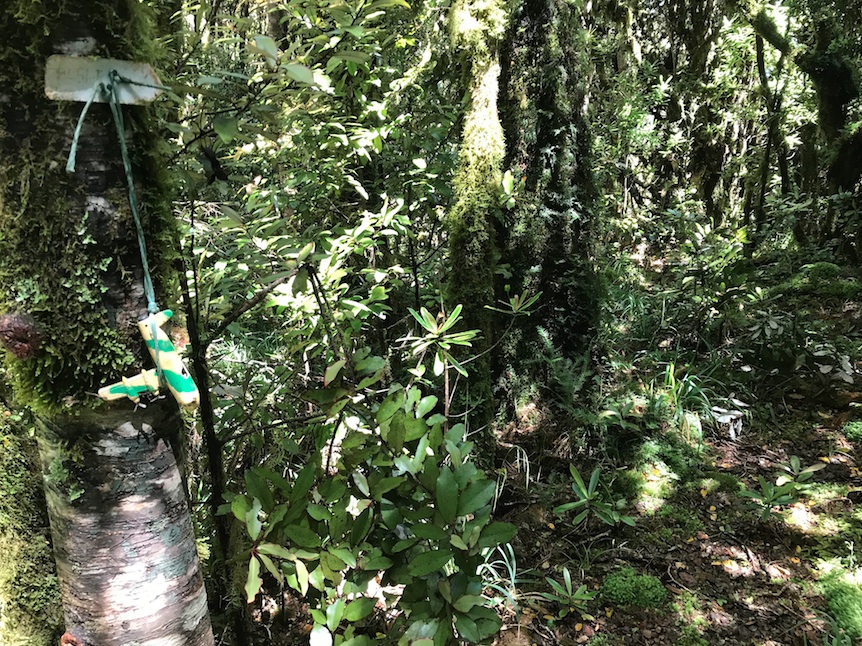 With our Northern Crossing plans blown to tatters by forecast gale-force winds we looked for other options. Island Forks was suggested, and three of us elected to do it as a day trip. Looking at the route on the map I anticipated a long day. The idea of a day pack however, was rather appealing.

We met at the train station at 7am on Sunday morning and were ready at the track start at around 8:30am. Aimee’s group was planning an overnighter in the same area, and we walked the first part of the track together. Following the river, the first section of the Mick Track was very marshy and we were all glad of our gaiters. A few river crossings later, sloshing and squelching noises from inside my boots were competing with the sloshing and squelching of my boots through the marsh.

Pleased to leave the river, we said goodbye to Aimee’s group and carried on apace up the hill. The track, being really more of a route, is marked with pink tape. There were plenty of soft mossy trees to pull oneself up on and we climbed steadily. We saw a few goats, and the goats saw us. They didn’t seem particularly bothered or interested though. One billy goat with fairly impressive horns and beard peered at us for a bit then decided we were boring and turned away. We gained the ridge and continued along it to the local high point that is the end of the Mick Track. This unassuming point is marked with an old walking pole stuck in the ground. It was now 11:30am. We reassessed our ambition. The plan to make our way down to Island Forks was looking like a long day. I was prepared for this and was carrying large quantities of homemade shortbread and chocolate brownie, but other members of the party (secretly to my relief) were not up for a 12hr day. We decided to go a little way along the ridge towards Island Forks and see how long it took us. The route was fairly clear and marked with pink ribbon but pushing through the leatherwood didn’t make for the quickest of walking. We got to a high point where someone had very kindly cut away some of the leatherwood, leaving a little sunny clearing. We decided to break for lunch, and having decided not to press on to Island Forks, we lazed in the sun, took photos of the view and generally just enjoyed being there.

We then walked back to the Mick Track, but instead of returning the same way we had come, decided to make a loop by continuing north along the ridge, before curving to the west to meet up with a four-wheel-drive track. The bush along the ridge was fairly open, easy going and a visual delight. Sunlight slipping through the canopy onto gently waving crown ferns was magical. There was also lots of softly glowing kidney fern, but I didn’t get a picture of this, sorry.

After scrambling over fallen trees and pushing through rotting branches as a matter of course we fairly fell out onto the four-wheel drive track. In one direction the track led straight down, and in the other, a gentle gradient up. We did of course want to be heading down, but not quite yet, we had a bit of sideling round to do. As we found, there are lots of four-wheel drive tracks in this area, many them not marked on the map. It was a nice track, but the relentlessly gentle gradient and the hard stones were beginning to make my feet ache. Oh, for a soft marshy bog! At last we were down and plodding back along the gravel farm road to the car. Finish time 5:10pm

A good day out.