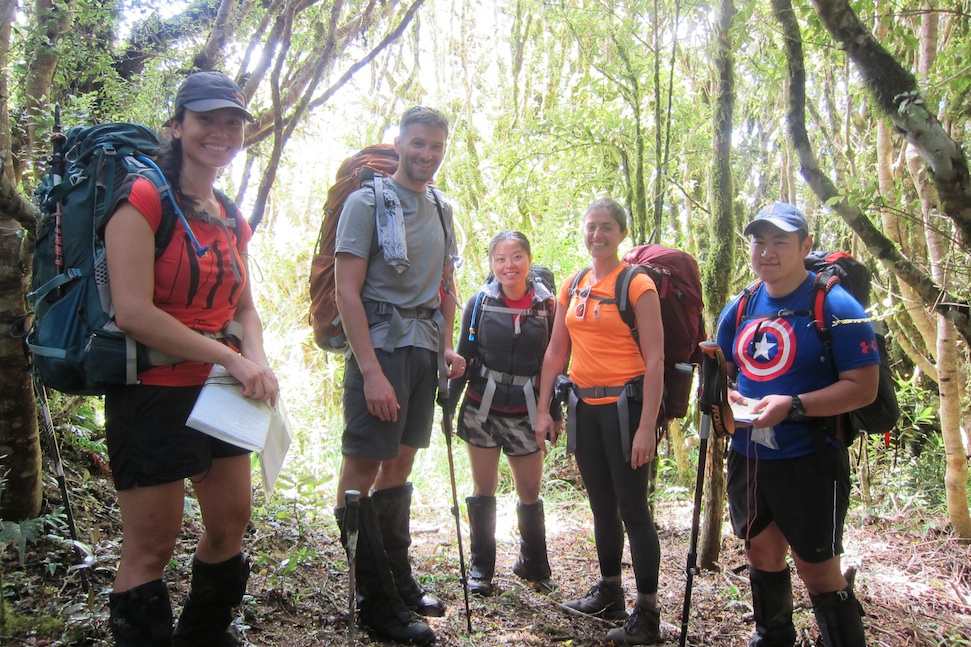 After my previous adventures up the “Mick”, you would have thought I could safely leave this area of the Tararua alone. Not so. Apparently I love getting lost in this Bermuda Triangle of bush. However, I am not on my own in this. Every now and then on the eastern slopes of the Mick, you will come across a raggedy piece of pink tape, relics of previous brave explorers whose navigation dreams were crushed by the reality of tenting on a cold, rooty and sloping spur, after a long day of scrambling from nothing to nothing, far away from anything. Of course, our group was destined to join this nefarious hall of fame. And I have no doubt many more will too – the lure of the unexplored is just too much for a keen tramper!

The Northern Crossing Cindy and I had been planning for Wellington Anniversary weekend was cancelled due to gale force winds. I therefore had to come up with an alternative Tararua adventure that involved no tops. My choice was an overnight navigation trip in search of a DOC biodiversity biv somewhere near Island Forks. However, to get to this biv we would need to trek back up to Mick and down one of the various spurs to the Waitewaewae River. Patrick, Steph, Ken, Caryl and Yenfei were brave enough (or silly enough) to join me. So, after waiting out some rain on Saturday, Sunday morning slowly simmered into something warm and clear, and we began the boggy slog up the true right of Waitohu Stream, to the bottom of the Mick track, and then on up to the Mick.

Cindy, Matt and Paul were day tripping to Mick point, and so took off ahead of us. We met them just after we had veered east of the Mick high point, in a small saddle before a clearing on the map. They reported an overgrown but reasonably easy to follow ground trail along the exposed tops, at least as far as they had gone. Bouyed by this positive news we pushed on and up through the scratchy bush, following a just discernible ground trail until we found the high point and their lunch spot. Here we had our only views on the trip.

The ground trail (and occasional ribbons) continued along the spine of the ridge, and I was tempted to keep following it. However I knew that it probably wouldn’t lead us where we wanted to go, so at 2pm in the afternoon, at approximately the point on the map where a small circular swamp is marked, we stepped off the safety of the ground trail and onto a wide spur that pointed in a north easterly direction and which I hoped would deliver us to just below Island Forks.

It is best not to dwell on the next seven hours. Suffice to say we made very slow progress, often losing our bearing and falling off the spur, having to climb up or around to get back on it, or coming across unmarked gulleys and rises in our way. Eventually Pat and Caryl deployed the leap frog technique, keeping us moving in the right direction. However I was slowly losing confidence and energy. When we reached the 700 contour line we made a decision to aim for a stream south of where we were, in the hopes that would take the navigation work out of the journey. It did, but replaced it with a new difficulty – often impassable terrain where we were scrambling up and down banks after getting bluffed out. At about 8.30pm I had a princess moment after losing my footing on one of the muddy banks we were climbing. Poor Caryl was behind me, and had the awful job of not only stopping me falling, but also trying to comfort me at the same time. I think we were all exhausted, so made the decision to stop there and then on the spur we were on, heat up some bits and pieces for dinner and pitch tents for the night. It was a rather miserable night for all, but at least it didn’t rain.

We were up at 5am the next morning, knowing we had another very big day ahead of us. Sometime after 6am, Caryl began leading us on down the spur. Between the gps and map I was desperately trying to figure out where we were going, stopping poor Caryl at least twice to question her, but my brain had turned off about 3pm the day before. So it was up to Caryl to find a good route down, and she did an amazing job. Within an hour and a half we were at the river’s edge. However we had to sidle along the bank for probably another half hour to find a place to get down into the river. It was a bit of a sketchy descent but we made it down in one piece. I could have cried (again) with relief!

River travel was good, but slow. We had a couple of spots where the crossing was up to our chests (or higher in Yenfei’s case!) One crossing managed to sweep me up and dump me unceremoniously on a rock, giving both Patrick and I some pause as a I floated down the river. When we were finally within cooee of the hut, we came across a group of three fishermen who were rather amused by our bedraggled state. Following in their footprints we found the route up to the bridge and along to Waitewaewae Hut, arriving at about 11am to the luxury of a wooden bench to slump on.

Having donated most of their food to the group’s dinner the night before, Pat and Steph needed to cook up some lunch. However I knew Matt and Maarten were waiting for us at Otaki Forks, expecting us at 2pm, so was anxious to keep going. I split the group thinking that as I was a bit slower, Pat and Steph would catch up along the way. In retrospect it wasn’t a great decision, as Steph had some ankle trouble that the group could have helped with by taking gear.

Caryl, Yenfei and I walked as fast as our little legs would carry us, over the ups and downs of the Waitewaewae track, arriving at Otaki Forks five hours later. Thankfully Matt was still there, and Maarten was a bit further up the road searching for cell phone reception to see if we had sent a text message to explain our lateness. After profuse apologies to Matt and Maarten, Caryl and Yenfei got a ride out with Maarten, and I went back along the track to gather up the rest of the group I had deserted. Eventually reunited, we changed as quickly as possible and got on the road. I was very conscious that waiting at the road end for another tramping group, not knowing what has happened to them, is not a great way to spend your Wellington Anniversary day!

This trip was costly in more ways than one. Yenfei lost her walking pole at the base of the Mick track. I lost my watch in the Waitewaewae River. Matt and Maarten lost their Monday afternoons waiting at Otaki Forks. I lost some confidence in my navigation abilities, while I am sure the group lost their patience with me (although they would not admit to it!) On the plus side, the group took excellent care of me, and I was reminded again how generous and patient the people who tramp with WTMC are. I’ve put this trip in the “do not repeat” category, and am trying to make it up to my dear tramping companions!