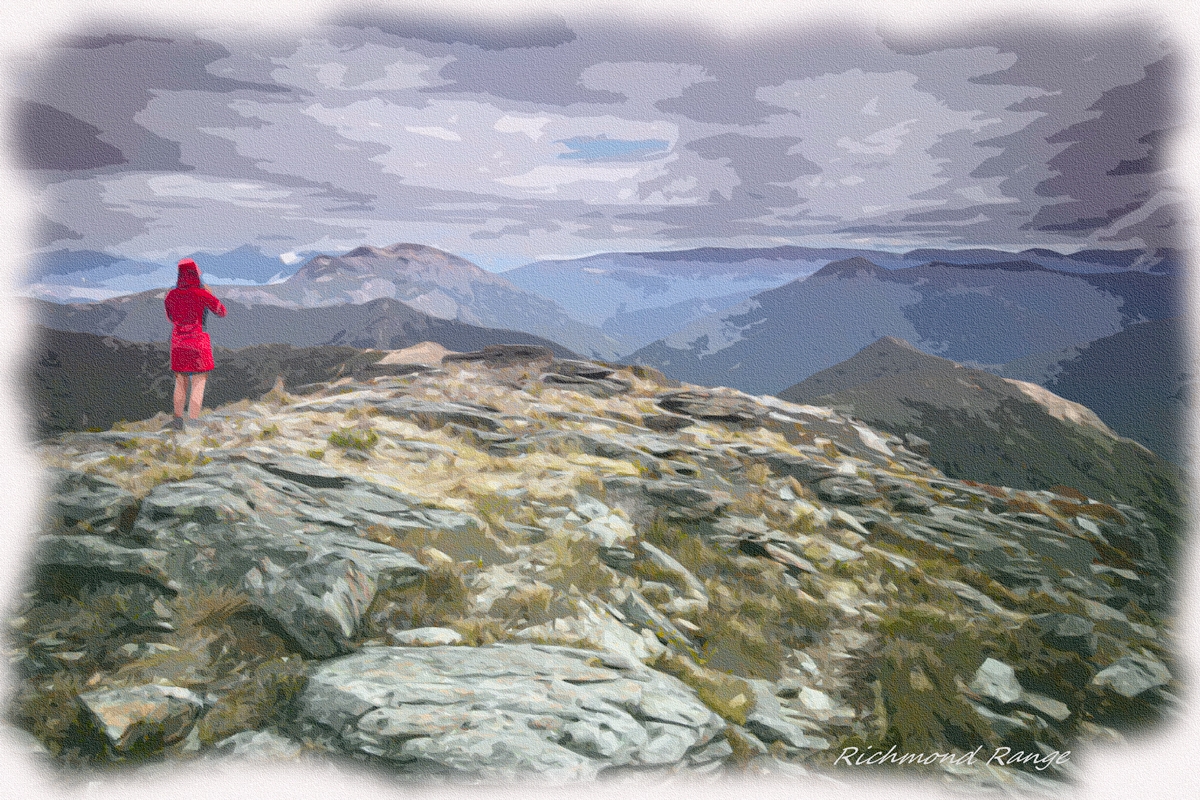 We weren’t supposed to be in the Mount Richmond Forest Park – that was Plan C. But the weather had already put paid to Plans A and B. So as we were driving up Staircase Road to the Lake Chalice carpark and a pine tree fell in slow motion across the road immediately in front of us it seemed like we would be looking at Plan D.

Fortunately Sarah is made of sterner stuff and she wasn’t going to let a mere 10 m tall tree stop us. So after much pushing and heaving it was moved far enough for us to drive around.  We made it to the carpark, and a further 30 minute downhill walk took us to Lake Chalice. We were underway.

But there was one further problem—after heavy overnight rain the rivers we running very high and it seemed we would be unlikely to be able to cross the Goulter River to get on to the track to Tarn Hut. So we revised Plan C and headed to Mid Goulter Hut for the night with the option of reaching Tarn Hut via a bush-bash past Mt Edelweiss and Purple Top. After Sarah had prepared a very special meal and we had toasted marshmallows for dessert we settled in for a comfortable night as light rain pattered on the roof.

In the morning we headed back up the track about 45 minutes and bashed down to the Goulter River to look for a crossing place. The river had dropped from the previous day but was still running fast and the only slightly realistic crossing place was directly above some fearsome rapids. Neither of us fancied the dodgy runout so Plan C was modified again and we decided to head for Old Man Hut. Now we could cross the Goulter River above the stream from Old Man where the flow was much lower.

The sun was shining and the afternoon was calm when we arrived. We moved in, made a cup of tea and sat outside on the conveniently provided DOC picnic table. But Sarah couldn’t sit still for long and set off for the summit of the ‘North Peak’ of Mt Rintoul. I took the easy option and spent some time taking photos and sawing fire wood.

Sarah returned after making the summit and then being driven down by the wind and mist that arrived immediately she did. Later that evening a gigantic lenticular cloud formed over the summit. It covered half the sky with streaks of black, grey and fiery red, and looked both beautiful and totally scary. We fully expected that it promised a change for the worse in the weather. But inside the hut we had a cheery evening with another of Sarah’s fresh veggie meals and yet more toasted marshmallows.

Surprisingly the weather early next morning was fine and calm. Plan C had already been modified yet  again overnight and now involved a fairly easy day back to Lake Chalice via Old Man Peak.

We climbed up to the ridge and started towards the peak. The sky had by now darkened and the wind picked up and the first light snowflakes drifted by. We passed the only other people we saw when two south bound Te Araroa walkers appeared out of the mist.

The snow became heavier as we approached the summit and as we started down the other side we found ourselves inside a blurry world of big falling snow flakes. But we were loving it—there is something crazy and exhilarating about an unexpected  summer snowstorm.

We were sheltered once in the bush again and the track was easy. We climbed to Point 1522 arriving just as the clouds partly parted and a tepid sun was enough to warm us again. We found a sheltered spot for lunch and enjoyed the panoramic view extending as far south as the snowy Nelson Lakes peaks.

We wandered back down to Lake Chalice and made ourselves comfortable in the hut. Sarah easily won the firewood sawing competition but then she failed with the fire lighting.  Another delicious fresh veggie meal appeared as if by magic and afterwards we toasted the last of the marshmallows.

A one hour walk back up to the carpark next morning was a super easy day to end the tramping. However, the Richmond Range had one more surprise for us—as we rounded a corner on Staircase Road we had a wonderful view over a mist covered Top Valley and low cloud extending as far as Cook Strait.

It was a stunning way to end our trip and we are both certain we will be back again soon.