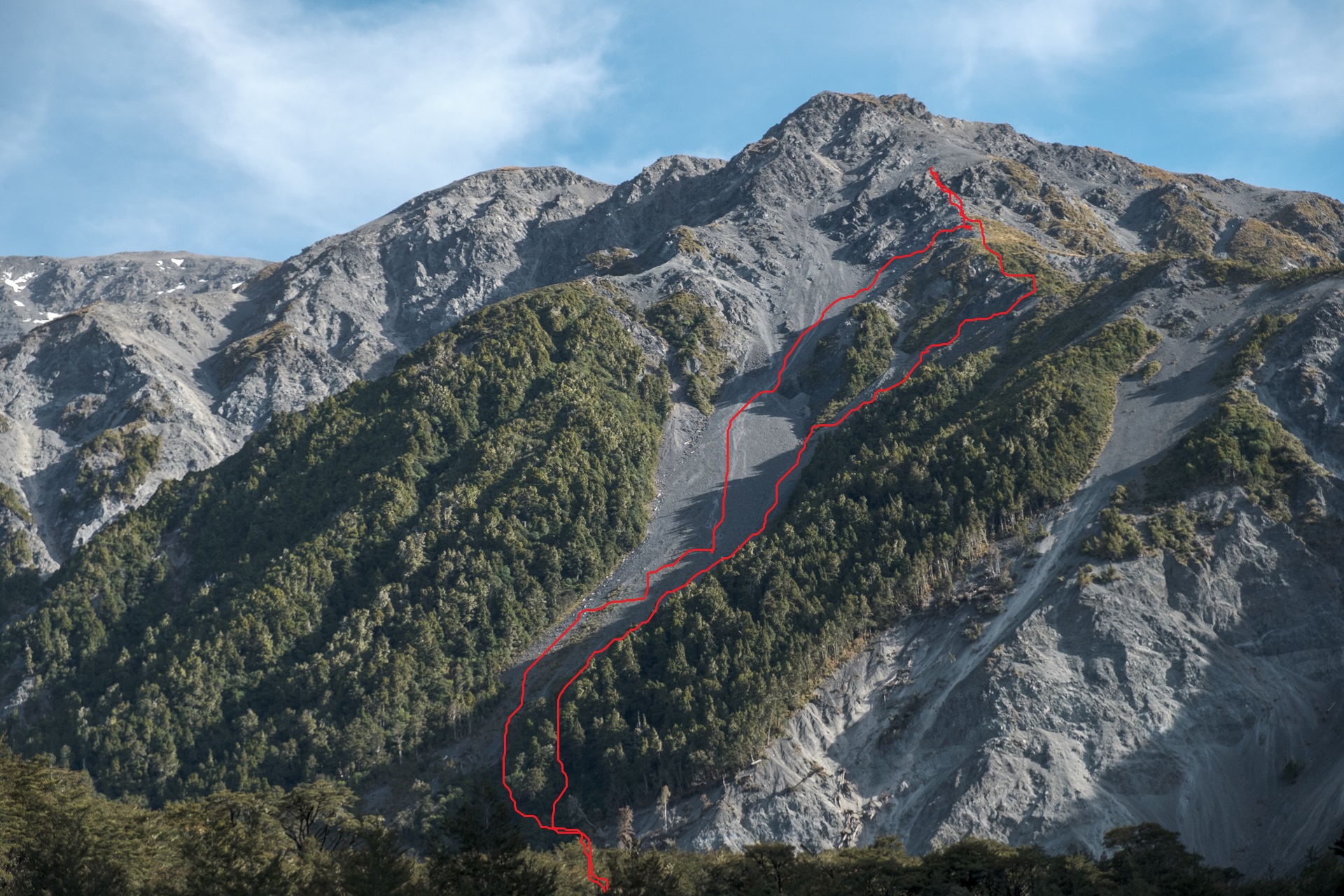 Sometimes trips I lead are a bit chaotic. This one was no exception!

High winds forecast for the Sunday afternoon ruled out camping anywhere along the ridge, so our crazy plan was to summit Te Ao Whekere and return in one VERY long day. After a booking fail (my fault) with the ferry, we ended up on the late sailing to Picton, arriving at midnight. We then drove to our road end – PuhiPuhi Road by Jordan Stream. This was about 10 minutes past the DOC campsite, and is recognisable because there is a small flat spot on the right hand side of the road, just enough to park a van, and a DOC sign indicating public conservation land. Just beyond the sign is a fork in the road – the left hand leading up to a narrow “saggy” bridge, and the right leading down to a ford. We parked the van in the parking space, fell out , faffed around, and started walking up the stream at 3.30am!

Making our way up Jordan Stream in the dark wasn’t too difficult, thanks to Emily’s superb route finding skills. However, walking at that time in the morning is never easy, especially up a boulder-filled river. In the dark it was difficult to see the northern fork we needed to take. We ended up following the wide open western fork for a bit, and then doing a zig zag back to the northern fork.

Back on track, we marched on. About 1km further up the stream Ian scrambled up a grassy bank and found us an excellent campsite (which I named “rubbish bag campsite” because we all bought plastic bags and dumped our overnight gear there in the bushes). This was a great campsite, and had clearly been used as such before.

After changing out of wet approach shoes into boots, reorganising packs, and a snack, we carried on further up the true right of the stream. At the first, very obvious slip stretching from the river to the ridge, Tony pointed out the route we normally would have taken. However, the earthquake has shaken Te Ao Whekere up, and this route was no longer safe. Instead we plunged into the scrub on the true left at the edge of this slip, and scrambled our way slightly upwards, and sideways, to the next big slip. Once on the scree of the second big slip, the route was more obvious – straight up!

I definitely struggled with the ‘two steps forward one step back’ nature of the scree and felt I was on my hands and knees more than on my feet. The others zoomed to the first natural “fork” in the scree (where a stand of scrubby bush made the scree paths diverge). At that point we decided to split into two groups – a speedy group, and an Aimee-paced group. The speedy group took off at an incredible pace and the Aimee-paced group followed in thier nicely-kicked footsteps.

There was a nice flat spot at the point at which we got on the ridge. Here we had a break and took in the beautiful views back to Kaikoura.

The ridge travel from that point was not as easy as I had hoped. It was a mixture of scrub and exposed loose rock. The scrub route was safer (more to hold on to) but hard work, as you often had to pull yourself up with both arms, and drag a knee up to hold yourself in place. When we were forced out onto the scree, we had to sidle along while balancing against crumbly loose rock outcrops. Perhaps about 200m from where the ridge flattens out a bit, we caught up with speedy group. They had stopped because they were unsure of the route to take. Tony pointed them in the right direction. I decided at that point (about 10.30am) I had lost my nerve and the energy to go on. Tony sat with me for a long time on the rocks, taking in the views, and watching a falcon dart about.

As it turned out, the speedy group also found the route tough going, and turned around before the ridge flattened out properly.

The descent turned out to be much more fun. I was very nervous about the steepness of the slope we had to descend, but the scree was nice and deep, so you could dig your heels in and ride an “avalanche” of little pebbles down! Just as I was starting to enjoy myself, an orange blip zoomed past – Ian literally running down the scree!

Unfortunately it wasn’t all fun and games. The rock in the area is very unstable – we watched “rock avalanches” falling from the neighbouring peaks the whole time we were there. We had to give each other space and time to descend the scree slope so that those underneath didn’t get hit by rocks loosened from those above. Poor Flo was knocked off her feet by a boulder – a sobering reminder of why we wear helmets.

Back down in the river valley it was a relaxed walk to rubbish bag campsite. We got there mid-afternoon, just in time for a nap in the long grass! Needless to say it was a very early night, having gone close to 32 hours without sleep.

The next day we wandered back down Jordan Stream, enjoying the river walking in what was a very hot morning. Once back at the van, we used the opportunity to investigate the area for Tony’s secret campsite (which will remain a secret, unless you come on a trip to Te Ao Whekere!) This is a campsite he found one of his previous 5 trips up Te Ao Whekere!

Then it was time for lunch at a cafe in Kaikoura, followed by a relaxing walk along the Kaikoura Peninsula walkway. Emily found and named a more achieveable peak for us to climb – Te Ao Whekere-Iti. Tony and James also got in some stone skimming practice.

Despite not getting to our goal, it was a randomly fantastic trip! Only a few hours later, we were all saying we were ready to give Te Ao Whekere another go! Tony shared a teaser of what the view could be like next time…