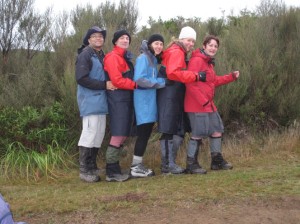 Kashmir Road on the eastern side of the Ruahine range is probably the worst road that I have ever encountered.  It is unsealed, very steep, very narrow and quite scary in places.  Nevertheless, we got to the road end without incident.  Thanks Hans, for your superb driving!

There were five punters on this trip: Jo, Clinton, Marie Smith, Katy, and myself.  It was Katy’s first trip with the club.  I thought she was very brave doing her first trip in the middle of winter.  The weather forecast was not good; in fact it was quite bad.  Jo had investigated the possibility of camping at a better location on Friday night, but in the end it made more sense to camp at the actual road end.

On Saturday morning we did the usual easy trip stuff: get out of warm sleeping bags, have breakfast, pack, wave goodbye to the medium trip punters, and have the mandatory photo session just to prove that we had actually been there!

The plan was to go up the ridge from the road end to Long View Hut, then head north along the adjacent ridge, and down to Daphne Hut.  Well, that was the plan, but it did not eventuate.  Although it was rather cloudy, the really bad weather never happened.  The climb from the road end is quite steep and it certainly got the blood pumping; especially mine.  In fact I was really struggling at the back of the group.  I was obviously very unfit.  I advised Jo that I might have to bail out at Long View Hut while the rest of the group continued to Daphne hut.  To ease my pain the other punters kindly carried some of my gear. (Thank you – it was much appreciated). 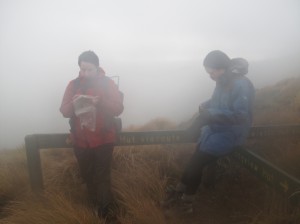 We arrived at Long View hut just as the medium trip punters were leaving after their morning tea break.  Although it was not raining it was very cloudy and there were certainly no views to be seen from this location.  It was suggested that the name of the hut should be Short View instead of Long View hut.

The plan for the weekend was changed.  Instead of continuing to Daphne hut, we would stay at Long View Hut for the night, and those who wanted to do so, would do an out-and-back walk from the hut. After having our lunch Jo, Clinton and Katy headed off into the mist to Otamore peak and beyond.  Marie stayed back and read Katy’s book.  That was quite a cunning plan – Katy carried very bulky and heavy paperback, and Marie read it!  Meanwhile, I had a damn good snooze in a warm sleeping bag.

At about 3.00pm the clouds miraculously disappeared and the short view did indeed become a long view.  Marie received a text from Jo saying that they would be out for a little longer than planned and would now enjoy the views.

Jo, Clinton, and Katy arrived back at the hut around 4.00pm.  Dinner followed a couple of hours later, along with the usual hut banter and activity.  We had the hut to ourselves for the night which was not surprising as the weather forecast would have deterred a lot of people from tramping in this area.

Sunday morning arrived and we were packed and ready to go at 8.30am.  The really bad weather had still not arrived and we were very thankful for that. We set off back to the turn-off about 10 minutes away from the hut and then headed north along the ridge that we had originally intended to take to Daphne Hut the previous day.  The route was unmarked but Jo used her map and compass to make sure we kept going in the right direction.  Soon the alpine terrain stopped and the forest began.  Marie spotted an orange track marker on the other side of a small gully so we were now back on a track.  A short time later we turned to the east on the track that goes back to Kashmir road.

We arrived at the road before the medium group.  We had time to walk the 2 kilometres to the road end to pick up the van and sort out our gear before the other group arrived.  I must say that in daylight Kashmir road looks even worse than at night.

Many thanks to Jo for leading a good trip.  Well done on first trip as leader Jo.