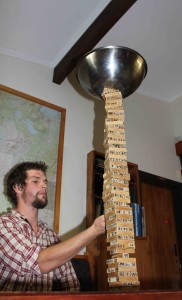 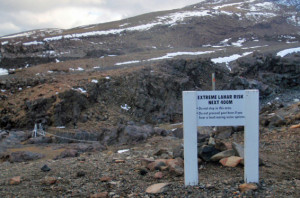 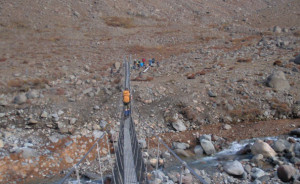 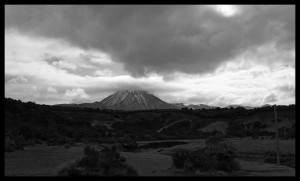 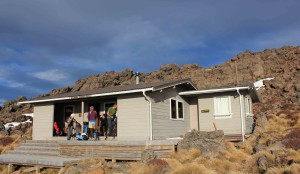 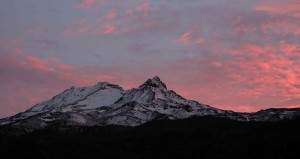 Thursday 5.30pm found Amanda and I corralling punters into our respective vans at a very busy platform 9 on a warm and overcast evening. We were headed for the club lodge for the night; the other van was headed for somewhere north of Taupo. Unusually, we encountered no traffic issues; we were all the way to Waikanae without delays. This seemed simply too good to be true! We still stopped for dinner in Levin, popping in to the supermarket to buy the frozen chicken for Sunday nights roast, and any other “essentials” people had forgotten.

Arrival at the lodge was at a good time, about 11pm, and in good conditions. There was a bit of snow hanging around on the path up to the lodge, but there was no depth to any of it, which was good.

We knew we had at least 7 hours walking ahead of us, daylight would run out at some time around 5.30pm and there was an hour’s drive before we could start walking. So we were aiming to be out of the lodge by about 8.30. On arrival at the Waihohonu Carpark, we unloaded ourselves in the cold breeze and said goodbye to Jo, who was taking the van and staying at the Lodge for the weekend.

The walk in to the New-New Waihohonu Hut (as opposed to the now Old-New hut, formerly across the river) was a doddle. A slight climb over just on an hour and a half, on easy ground. We stopped briefly to explore the hut and had a light morning tea while chatting to the hut warden – WTMCs own Paul Jeffries! He strongly encouraged us to visit the Historic Waihohonu Hut on our way through, advice we eagerly took and certainly didn’t regret. (In fact, I recommend the Historic Hut and the nearby springs as a good day walk).

From there, it was a long trudge up the track – it was like walking uphill on a beach! Soft, sandy soil that didn’t allow you any push, and had no solid sections you could walk on instead to make it easier.  By the time we stopped for lunch we were all really glad that we had covered what appeared to be most of the sand before lunch rather than having to do it after! Needless to say, some people found this quite tiring, carrying three days food and lots of water.

It was a long slow march through a massive variety of terrain for the rest of the day, and at times the walk seemed interminable. I am ashamed to admit that this day really got the better of me. Eventually, we got to the Tukino Skifield access road, a point where Paul had told us we would be only an hour from Rangipo. We all felt relieved. By this stage it was about 3.30pm and we were all getting cold from the wind and tired from the long day’s walking.

The most challenging bit of the day was certainly in this last section, crossing the Whangaehu River lahar path. The signs are ominous: “Do not stop” “Do not enter if you hear a roar upstream”. We entered the valley as we couldn’t hear anything (and there wasn’t a high lahar risk), and discovered that this was actually some of the most tricky terrain we had yet encountered: clambering over large rocks, a double dip valley before getting to safety, a single person bridge halfway across. I commented to Mark when we got out the other side that if we had heard noises upstream, I would have had to dump my pack to get any momentum, and even then I would have been lucky to get out of the valley in any hurry!

The last of us (being me) arrived at Rangipo Hut just on darkness at 5.30 to find it fairly full, rather dark and VERY hot. Dinner and drinks were prepared outside on the deck (the only decent space), and the Thai Green vege curry was probably a tad hot. We were all so exhausted we skipped chocolate fondue for dessert, and along with the rest of the hut, most of us were in bed about 7.30pm.

To start with, we made good time, arriving at the top of the “Grand Canyon” (aka the drop down into the Wahianoa River) within just over an hour. We watched a German tramper we had met the day before ambling his way back up the far side of the valley as we pondered the task ahead of us.  Amazingly, even with a short stop at the bottom to ensure no-one had fallen off the track, we were up the other side less than an hour after we had left the Rangipo side,  a drop of nearly 200m (in just over 300m) and a climb again of about 150m. Talk about extreme landscapes! That said, it was nowhere near as bad as it had looked from the top, especially the sidling climb out of the valley, although you would have had issues if you had a fear of heights, as it was steep and high (and would have been a nasty run-off if you had fallen).

The next stop was lunch, and Tim (an angel) took pity on me and came the 15 minutes (at his pace) back to us and took my pack off me for the last of the walk to the rest of the groups lunch stop.  The terrain and weather, after we left the lunch stop, changed again. It got very hot and I had to dig all the way to the bottom of my pack to find something I could change into from my long sleeved thermal I had been wearing (I had packed it at the bottom, expecting a continuation of Friday’s cold weather).  We were now also walking in and out of patches of forest, which was pleasant, and patches of bog, which were not.

Parts of the track had obviously received some work in the past, but some of these changes actually made the walking more difficult: steeply angled boardwalks made of 2×2 with a 2×2 worth of space between each plank, that you then needed to step off down to another steeply angled boardwalk that was more than knee-high below you. For someone like me, who has ongoing knee issues, this was not fun, and so I found I slowed even further through some sections. Eventually I succumbed and stopped to take off my boot and put on a knee brace. It didn’t make me any faster, but it did mean I was in a bit less pain.

About 15 minutes after the next scheduled stop and regroup time, we came across the group, relaxing in the sunshine at the bridge that I knew with certainty was about 500m from the hut. We looked across the river in awe to the perfectly formed boardwalk on the other side and dreamed about it being that way all the way to the hut.

Alas, it was but a short se

ction of nice track, before returning to the norm of ladder-like boardwalks and slippery bogs. The others were so excited about getting to the hut in the early afternoon that they powered off ahead, and by the time Tim came back and took my pack off me again, we were still 10 minutes from the hut! On arrival at Mangaehuehu Hut you walk on to the deck from the north and look over a very awesome landscape down to Ohakune, Waiouru and the Ruahine and Kaimanawa Ranges. It’s incredible. Then you turn around to see Girdlestone Peak, and Glacier Ridge. This hut has one of the most stunning outlooks of any I have ever visited.

The sun was shining, so most of us took advantage of an early afternoon arrival at the hut to enjoy some time on the deck with another party who arrived not long after us. About 4.30pm we decided we should light the fire to ensure the hut stayed warm. The fire was so efficient we had to leave all the windows open all night so it was cool enough to sleep!

ed: Rice risotto (partly cooked on the fire), followed by cheesecake with chocolate sauce (leftover from no fondue the night before) and gummy bears. The clear weather also meant many of us spent time outside in the early evening taking photos and stargazing, and a respectable bedtime of 9pm was had by most.

About 6.30am I woke again to a beautiful pink sunrise. So I struggled out of bed again, grabbed the camera and a warm top and headed outside.  The mountain was beautiful and it was lovely to have some time to myself (a rare thing on a longer tramp with a larger party). Unfortunately, about the same time the other party who were sharing the main room of the hut decided it was time to wake up and share out their chocolate.

Our aim for the day was to get back to the van via a detour to Blyth Hut in time to be back in the lodge for a late lunch. Mark and I were again bring

ing up the rear, as both my knees were complaining a bit, but we were making much better time, and having started in warm weather and with a known short distance ahead, everyone felt good. After what felt like a surprisingly short time we were crossing our third of five bridges (being a great marker of distance) to discover Jo waiting on the other side with fresh donuts having walked in from the road end to meet us. The track continually improved; we were often now walking on well-made boardwalk.

Jo took charge of the bulk of the group who wanted to head to Blyth Hut, while Annie, Mark and I meandered slowly back to the van, stopping only when we got a bit misplaced crossing a stream that had an island in the middle of it, and to view the Waitonga Falls. The wind picked up a LOT as we were on the boardwalk through the middle of the bog around Lake Rotokewa and it actually got quite cold. We wound up being about half an hour ahead of the Blyth Hut visitors, and everyone loved arrivin

g at the van for an Easter egg hunt put on by Jo.

Back to the lodge via a toilet stop in Ohakune, showers, lunch, dinner prep and off to the hot pools. Talk about a fantastic afternoon! We arrived back at the lodge bang on darkness with showers developing, to discover the chicken was already cooking and the veges were ready to throw in the oven. Apple crumble and custard followed for dessert and a fun time, including giant jenga, was had all around.

After having lots more food (attempting to eat as many leftovers as possible) and cleaning up, we were on the road in the rain not long after 11am. We hit traffic at Waiouru, then again at Taihape (at just on 1pm as KFC was opening) but arrived at Bulls at 2pm for a late lunch. 2.5 hours later we had arrived in Otaki (80km away), but at least we had fun getting there as we were all very well rested. The van was returned to its car park at just after 6pm and it was home to do laundry and other such things before returning to work.