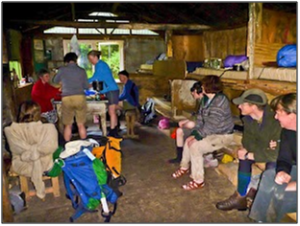 Fine start on Saturday, overcast developing with a couple of light showers in the afternoon cloud breaking for a clear Sunday.  No wind.

The track appears to be infrequently maintained; so although generally pretty easy to follow, there are quite a few tree falls which haven’t been cleared so there is a bit of scrambling.  I wouldn’t want to do it by torch light.

The club van comfortably took 11 people to the Mangatarere Valley road end North West of Carterton.  We had to park off the road about a kilometre from the end as the concrete base of the ford at the start of the private road was broken (a high wheelbase 4WD would get through fine).  Apart from that, the road is well maintained and it is a short walk to the track (easy to find).

We follow a small stream for a couple of hundred metres then cross and climb steadily about 500m; through patchy scrub then into open beech forest and mossy, stunted goblin forest at the ridge top (772m).

The ridge separates the Waiohine River valley from the Wairarapa plains.  Older maps show a track leading north along this ridge but it is absent on the more recent series.  We pause at the top and note that you can still see where that track runs. 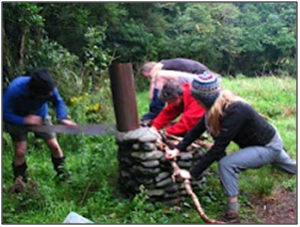 The track follows the ridge top for about half a km south, but before it drops 580m into the valley we stop for lunch and a few (shameless) final text messages.  Ray also takes a moment to discover that the goat skull he thought to give Marie a wee fright with, still has some exceedingly smelly brain matter attached.  The odour lingers.

We arrive at Sayers Hut after about 4 hours, to meet a party just leaving, including a 7 year old claiming his 30th hut.

Sayers Hut is one for the hut baggers.  On the left bank of the Waiohine River, across from the south end of Totara Flats; it’s not really on the way anywhere.  And there’s not much call to get your feet wet to pay a visit, when you’re on the way through Totara Flats (although it is a logical hut alternative provided you keep an eye on the river).  It is an aging deerstalkers’ hut, hidden in a tiny clearing, completely invisible from across the river.  It bunks 6 comfortably with floor space for more and plenty of spots for flys/tents amongst the surrounding trees and grass.

We have the place to ourselves and although one or two have found the track conditions a little challenging; everyone is soon pitching flys, cooking dinner, and gathering wood.  An old bush saw hanging on the wall is recalled into service, providing more amusement then firewood.

Rather than sleep on the floor; 5 sleep outside including Benjamin who trials a bivvy bag.  The next morning as we tidy up and contemplate doing what we did yesterday only in reverse; a handful of people turn up from Totara Flats to bag the hut.

It takes a little longer to retrace our tracks.  One of our party has an (ex)crutiate(ing) knee issue but Tony accompanies a small rear guard who make their own speed and seem to enjoy themselves (based on the level of chatter).  After about 4½ hours we are back at the van; quickly changed, packed and gone.

In review; Sayers Hut is well worth a visit.  It has bags of character (i.e. old, grimy with a few additional residents), is fully functional and appears to be well appreciated by those that stay.  Although the climb and track conditions are possibly a little more challenging then your average easy trip; it is two relatively short days.  Alternatively, it is an interesting alternative route to Totara Flats rather than Waiohine gorge or Totara stream.  Well chosen Tony!

DoC doesn’t have a lot to say about it: