What has happened to tubing in the club? Once it was an extremely popular summer activity. It’s a great way to see stretches of river that would otherwise be inaccessible. And of course it’s great fun! As Ratty said in the Wind of the Willows, there is nothing, absolutely nothing, so much fun as simply messing about on a river in a boat (or a tube).

The Tararuas are full of gorges that make excellent tubing trips. One of my very first trips with the club was a day tubing trip down the Hutt Gorge from Kaitoke to Te Marua, and it attracted a whole busload of punters. And I don’t mean a piddling little 20 or 24-seater like the club’s former bus, the Orient Express – I mean one of the large 40 or 42-seater Runciman buses that the club used to use for transport back in the days before we first bought our own vehicle (the late, lamented truck, The Duchess). In those days the Hutt Gorge used to appear on the trip schedule most summers.  Now tubing seems to have died out to such an extent that I can’t remember when the club last did this trip – it must be years ago, despite the fact that it’s one of the best tubing trips in the Wellington region and, unlike most river trips, you can drive right to the start of it.

Another popular trip was the Tauherenikau Gorge, from Smith’s Creek out to the Wairarapa. This does involve a walk in up the Puffer and over the saddle to Smith’s Creek, but it’s no more than a couple of hours on an easy track, and when you reach the Tauherenikau you spend the rest of the day on the river.  I’ve done both the Hutt Gorge and the Tauherenikau Gorge three times over the years. The last time I can think of that the club did the Tauherenikau Gorge was a trip 5 or 6 years ago now led by Ally Clark (a real water rat if ever there was one). It’s completely straightforward with some fun rapids and there’s a nice boulder beach about halfway down on the true left that catches the sun and makes a perfect lunch spot. 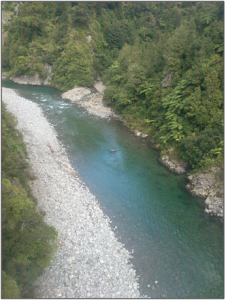 Every Anniversary Weekend in January the club would run a tubing trip on the Pelorus River in Marlborough. This must surely be one of the best tubing rivers in the country. You would spend the first day walking in over the ranges from Nelson, and then two superb days tubing out to Pelorus Bridge on the Picton-Nelson highway. There are also some superb tramping trips you can do in the same area, such as up the old Dun Mountain Railway behind Nelson to Dun Mountain, a geologically interesting area of ultra-mafic rock, similar to the Red Hills a bit further south, with superb views from the summit. From Dun Mountain you can drop down to meet the Pelorous at the halfway point and follow the track out down the river. I only ever tubed the Pelorus once, in 1989, but BJ (Brian Johnson), surely the club’s foremost water rat, must have done it a dozen times!

BJ was on the trip the time I did it (of course!), along with such stalwarts of the club at the time as Eric Evans  (a former Chief Guide and our new Ruapehu Lodge Booking Officer) and Anita Catchpole (another former Chief Guide). Brian Goodwin was also there, plus a German couple called Peter and Sally, and one or two others. I seem to remember Julie Catchpole and Murray McRae were also there that weekend, although I think they must have been on one of the tramping trips rather than the tubing trip. I remember Eric’s tube exploded under him on the last day – he was left with nothing but a piece of shredded rubber and had to walk out! And earlier in the trip there was one rapid where several people’s tubes got punctures, one after another in succession – there must have been a strategically placed sharp rock lying in wait just below the surface! This is a great trip – why don’t we do it again? Anniversary weekend next year – Amanda, are you listening?! I’d be keen to do it again and I’m sure there must be a few other river rats out there who would be interested in going as well.

Recently I’ve done two easy day tubing trips on rivers in the Tararuas. In mid-March I led a trip on the Waiohine River down from Walls Whare (or what used to be Walls Whare before this club, in its wisdom, decided to pull it down). The original plan was to get there by train and bike, and at one stage I had four other people signed up, but for various reasons it ended up being just two of us, myself and Snaiet Shalav, and we went over in Snaiet’s car. We parked at the Waiohine Shelter and walked for half an hour up to the end of the road. Then it was into the river for a superb float down the gorge. “This is the life!” I  said to Snaiet as we bobbed our way leisurely down the first few rapids, then floated slowly down the following flat stretch of water in the sunshine. Then on the very next rapid I lost control, slammed into the rock wall at the bottom of the rapid, and came off into the deep pool! But there was no harm done and I just paddled to shore and hopped back on again. That was the only time either of us came off. Maybe one of the reasons why tubing activity seems to have almost died out is because of the paranoia over safety and the totally inflated and misconceived notions of “risk” that seem to be associated with any activities in the outdoors these days. In the old days people just went and did trips; a bit of common sense and experience and tramping nous would see you though. These days you almost seem to have to fill out a detailed safety plan in triplicate and swath yourself in polystyrene padding from head to toe before you’re allowed into the outdoors.

After about an hour and a quarter we came to the track leading out of the river and back up to the Shelter and the waiting car. We did have the option of continuing a bit further – there are two other possible exit points a bit further down – but we decided to get out here. Further down, the river becomes wider and more sluggish and you have to paddle more, and besides I was getting cold! (Snaiet had a wet-suit top but I just had a few layers of polypro.)  So we clambered out up the track and dried out in the sun before heading home. It had been a superb little day trip, although I’m still keen to do it the way I originally intended sometime: by train and bike. It’s about an hour’s bike ride from Matarawa railway station and the trains work out perfectly with about three-quarters of an hour to spare. Maybe next year when summer rolls around again!

A couple of weeks later I did another day trip on the Ruamahanga led by Spencer Clubb. There were three of us, Spencer, myself, and Sam Thornton, and we went over in Spencer’s car. I took a tube, Spencer took a fancy little one-man inflatable Canadian raft, and Sam just took a wetsuit! We walked in up the sidle track above the river for about three hours, then dropped down the short track into the river just before Cleft Creek. Here we stopped for lunch and I inflated my tube (with a bit of help from Spencer and Sam – it’s damn hard work pumping up a big truck tube with a little bike pump!). Then it was off down the river. To begin with the river was easy travel with boulder banks and gravel beaches. Spencer and Sam just walked while I tubed down, stopping every now and then to wait for them to catch up. After about an hour or so it closed in and become more gorgy with deep pools. Here Spencer inflated his raft and Sam donned his wetsuit. By this stage I was beginning to shiver as I stood around waiting – the water was freezing, it was a cloudy day, and it was really a bit late in the year to be doing river trips, especially since, unlike the other two, I didn’t have a wetsuit!. I put on every last layer of polypro I had, including my hat! Then it was back into the river for a superb section of gorge. I bobbed down on my tube, Spencer cruised down on his sleek little raft, and Sam just walked and swam in his wetsuit!

Eventually the river opened out again and we could get out and walk down the shingle flats, occasionally hopping back in to shoot a few of the more fun-looking rapids. Finally after about four hours on the river it was time to climb out and back to the waiting car. It had been an excellent day trip on a section of river I had never done before.