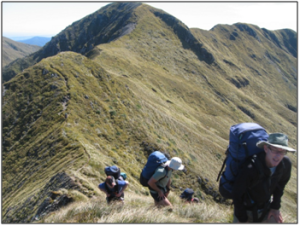 In November 2010 I did a great trip to Elder Hut in fine sunny weather (yes, this was the Tararuas). The views from the hut were brilliant, and it got the sun until late in the evening.  So when the trip was put on the proposed WTMC summer schedule for March 2012, begging for a leader, I took the opportunity to do a repeat visit.  This was something of a risk, as the trip would really only work if we got a repeat of my ‘fine sunny weather’.  And few of you need reminding that summer weather in the early months of 2012 was in short supply. But we were owed some, right?

Elder has only four bunks, so I was keen to restrict numbers. But after two late entries we had a party of six. Fortunately Nigel volunteered to take his tent, as he was in training for an Easter trip, but that meant at least one punter would have to sleep on the floor. Friday was a pleasant evening as we headed up to Field Hut. It seemed to be a pretty fast group for a medium, and we were all there within two hours. The hut was full, mainly due to a host of people who had tried getting to Kime that day but were turned back by strong winds. However, the winds were minimal by Saturday morning when we headed up to the tops.

There’s not a lot to say about this day’s journey, as nothing went awry to make for an interesting story. The weather was fine and sunny all day, with just a slight cooling breeze as we headed past Kime and up over Hector. The views were great, with the snow-capped Kaikouras seeming to tower over Wellington. Everyone was at Elder hut by about 3 pm. 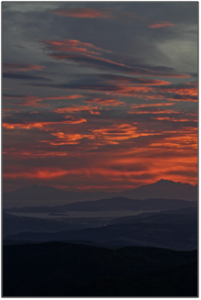 In the year since I had been there, the mattresses had become covered with mildew. Elder hut is only about four years old and, as has become standard with huts above the bush line, has no heating. Rob explained that all it requires is a party to come in wet during a period of little sun, and the damp will quickly take hold. I’d seen the same phenomenon in Tarn Ridge and Neill Forks huts. We put the mattresses out in the sun for a couple of hours in the hope that would improve things.

By early evening the wind was getting stronger by the minute. We retreated inside, although the keen photographers popped out to get pictures of the sunset. Nigel searched for places to erect his tent, which proved something of a challenge. In fact there are almost no camp sites in the area, which could have made things difficult for us if the hut was occupied. In the end the best (only?) site seemed to be one right by the hut, exposed to the strong nor-wester. David kindly volunteered to sleep on the floor, on the basis that he’d been a late entrant to the trip, and no-one argued.

The next morning the strong winds were blowing drizzle at us as we headed down towards Renata Hut. The plan was for the two M/F punters, Richard and WeiMin, to pick up the van from Otaki Forks and drive it around to Waikanae. This would enable us to walk out over Kapakapanui rather than going back the way we came. The M/Fs planned to visit the ‘Snowy River’ hut, rumoured to sit somewhere near the Waiotauru (ie ‘Snowy’) River.

We were all at Renata for an early lunch around three hours after leaving Elder. The hut was occupied by a solo tramper, who had bivied out most of the night before being woken by the rain and beating a retreat to shelter. We were all pretty wet, but the walking was oddly enjoyable once we got away from the exposed tops into the bush. Tommy and Rob, the two speedsters, went on ahead.  I had told the M/Fs we’d try to be out by 3.30 pm, and wanted to make sure at least two of us made it by then. The trip up Kapakapanui was pleasant, but with a pretty continuous climb from Renata. I walked at the back with Nigel and David. As we neared the bush line, I was thinking that maybe we needed a rest before heading up over the exposed tops. I checked this out with Nigel, who was still coming through the bush, but by then David had disappeared into the mist. He probably wasn’t that far ahead, but I figured it would be useless to try and call him back in the blustery wind, and went back to join Nigel in the shelter of the bush. David spent much of the next hour wondering what had happened to us, having waited at the top of Kapakapanui, then leaving just a minute or two before we arrived.

On the way down off the top of Kapa we ran into a party of four trampers consisting of a tall young man in bare feet carrying a large pack, and three young women trailing behind carrying little or nothing, all wearing trainers. Nigel and I chatted very briefly to them, not wanting to seem too nosey, then spent some time speculating as to what exactly they were doing. (Staying at Kapakapanui hut?  But no evidence of sleeping bags unless Mr Bare Feet was carrying them all. Doing a day walk?  But it was late afternoon and they still needed several hours to complete the round trip). Eventually we caught up with David, who seemed happy to see us. He had no more idea than us as to the plans of Mr BF and his entourage. (On another trip in the Tararuas, Jenny Cossey and I encountered a naked tramper – although I do believe he sported footwear).

At some point the ground changed from damp to dry. There clearly had been no rain here, making the travel down the steep track a lot easier. Eventually we reached a stream at the bottom of the hill, much to our relief as we had all run out of water. After guzzling half the stream and having a quick wash, we headed off towards the road end. To my surprise, this involved several stream crossings. We finally reached the van at 4.20, way later than Rob and Tommy who had got there at 3.30 on the dot. I gather that Richard and WeiMin had been waiting some time, having had a short walk out after failing to find the alleged Snowy River hut before nightfall the previous day.

On the way back the traffic soon came to a virtual halt. This led to some lively discussions as to the likely cause, and about roading policy in general, provoked largely by the discovery that Graeme’s job had something to do with road design. It turned out there had been an accident at Paramata. The traffic eventually cleared, and we were soon home after a very satisfying tramp.