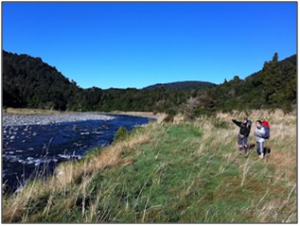 Pretty much perfect weather all weekend: overcast for the climb on Saturday clearing during the night to a brilliant, cloudless Sunday.  Virtually no wind.

The trip starts with pie and chips for breakfast in Carterton at the Goodness Food Café. Don’t be fooled by the humble exterior, the food is good and they threw in a couple of free hot chocolates.

After a bit of car juggling assistance from a local contact, the group leaves Holdsworth road end around 11.30 and heads up the excellent and easily graded track to Rocky Lookout for lunch.  Leo (age 6) sets the pace throughout the day, carrying his own good sized pack and only stopping when bribed with Jelly Beans. 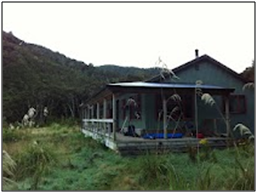 Mt Holdsworth is only visible as a series of spurs disappearing into the cloud but it’s not cold, there’s no wind and the sun is trying to break through so the going is good.

The drop into Totara creek is interesting with a little bit of clambering required before the trek down the right bank, which always seems to take a little longer then expected.  A few sections of track have been cut out by the creek and there’s a number of big trees down.  However the track is easy to find and DoC seem to be clearing the worst tree falls. 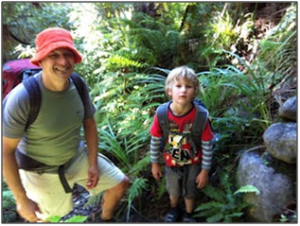 Reaching the end of Totara Creek there is a glimpse of Totara Flats Hut across the Waiohine River; indicating that we are just minutes away.  First though there is the impressive swing-bridge across the main river, a far cry from the cage and cable that one member of the party recalls.  It’s coming on for 5:00pm, just a little a bit over the DoC estimate of 4 hours.

But pretty good going for a 6 year old with his own pack.

Totara Flats Hut is a large, comfortable and well managed facility.  Quite a few families clearly think so, judging by the number of younger trampers that are having a brilliant time when we arrive.  This includes a number of other WTMC members:  the Kendons, Carrs and Connollys who are returning to Holdsworth Road end after a second night at Totara Flats. 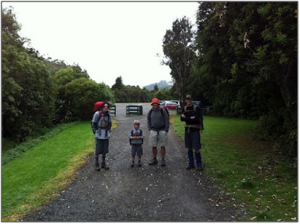 There is really no excuse for boring, stodgy or heavy tramping dinners with the help of the club recipe book. We prepare Aunty Rata’s Tomato Mac Cheese.  The dried coconut milk works its transformational magic and there is more than enough.

The younger members in the hut have pretty much retired by 8pm and by 10pm the last of the adults switches off the candles and silence descends.  The hut is full (about 40) so Adam and Leo sleep in their tent whilst the others bunk down on the deck in preference to the floor inside or pitching a fly.

The hut is good natured chaos in the morning and we are the first of a number of parties to head out onto the sunlit grass flats.  With a passing nod towards the location of the old new Totara Flats Hut we potter down the flats and regroup at the end to try to catch a glimpse of Sayer Hut across the river – not a chance.  Benjamin and Andrew had stayed there two weeks previously but no-one was game to get their boots wet this early in the morning to check it out.

Although the track pretty much follows the course of the river there is a fair amount of scrambling up and down old river terraces and across side streams.  This is fine for adults but is a little more challenging at age 6.  Leo throws himself at every bank and obstacle but having half the stretch and pace means he has to do twice as much and it becomes clear that we will take longer then the DoC time estimate.

Benjamin and Andrew forage ahead to arrange the car shuffle pausing to note a few items of minor botanical interest; the odd stand of Nikau, a single rata flower, and a slightly passed-its-best basket fungus.

When steps, culverts and board walks start appearing on the track we know it’s not far to go.  The trip culminates with the spectacular Waiohine bridge; enough to say that if you haven’t seen it, you should.

The party is out by 3:00pm, giving a tramping time of nearly 6h against a DoC estimate of 3 1/2 hours.  Plenty of time to enjoy the bush and the scenery.

So, a highly successful tramp providing an interesting round trip which a six year old managed and with more than enough to keep the adults entertained (but allow more time than the DoC estimates).  And to top it off, two prospective club members completed their second club tramp.

Post Script:  We noticed that it’s a long way along the road before you get cell phone coverage at the Waiohine road end so don’t rely on it to call your driver.