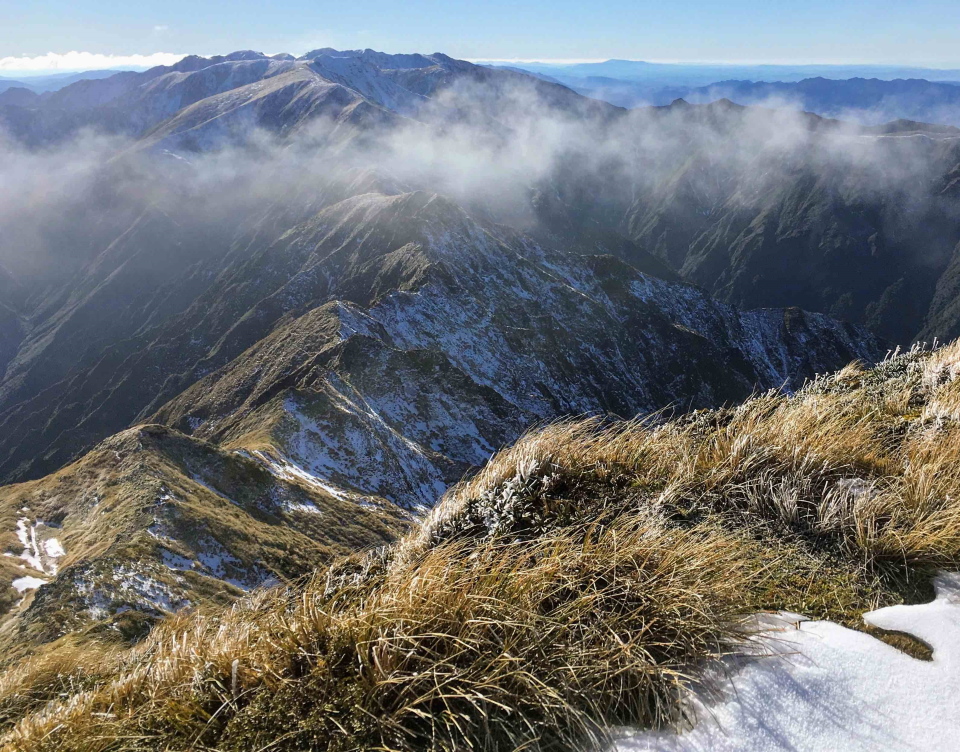 Let’s start by listing the things this trip did not have: injuries, complaints, Turkish food. That’s about it.

Ok, let’s look at what it did have; everything else!

Our carefully laid plans to get over the hill and enjoy a kebab in Carterton were scuppered after we found the long time WTMC favourite dinner-stop closed and boarded up. We didn’t stop to check if the signs indicated any prospect of it re-opening, as we were so bitterly disappointed. Instead it was a mad dash around New World grabbing whatever looked remotely carb-loaded.

A few non-eventful hours later (and the odd missed turn) and we were finally winding our way up the dusty Kashmir Road. It was a wonderfully clear and crisp night under the Milky Way and our 7-strong team made short work of the uphill to Longview Hut, knocking it off in just under 1 hour 30 minutes. We saw the lights of the hut from a long way off so knew there were others there and sure enough, they had the fire perfectly stoked when we arrived.

A cosy night’s sleep was interrupted just 6 hours later when we awoke to alarms and wind at 5am. We knew that Saturday would be a long day and therefore wanted to allow as much daylight as possible. I was very impressed indeed with the minimal faff-factor of this group, and we were out the door in the dark at just after 6am. The tops travel up and over to Howlett’s Hut is relatively straightforward except for one particular saddle which makes you work for it. We arrived at Howlett’s Hut at 9am, a slick 3 hours after setting off. I feel like we could perhaps have done it even faster had it not been for the constant ~30kmh westerly slowly wearing us down.

We enjoyed a decent pit stop at the Hut whilst we collected our thoughts and upped our salt intake for what was to come. Until now we had enjoyed unlimited visibility on the tops and beautiful sun (albeit with the wind delivering a sting). Looking up the ridge towards Tiraha and the Sawtooth beyond, we saw nothing but orographic poetry in motion – fast moving and dense cloud obscuring everything we were about to explore. There were quite rightly some discussions about what that might mean for our plans, but it was only 9am, and we were fresh as daisies. This was after all a Fit Alpine trip, so we all knew we should at least have a closer look.

Cue one hour of thoroughly enjoyable alpine tussock scrambling to reach the top of Tiraha. Near the top the route kicks up considerably, so much so that you definitely feel a little naked without an axe or pole in your hand. However, the tussock was reliable as ever. A less confident team might have found some limits on this terrain, but looking back, I couldn’t help but crack a huge grin when I saw each and every member firing their way up behind me, relishing the challenge of the steep terrain. We arrived on top into an utterly different environment; windswept, bleak and crunchy snow as far as the eye could see onto the surrounding peaks. This was one end of the Saw.

We stopped on a leeward slope overlooking the weekend’s objective to refuel and consider next steps. We knew that to descend onto the ridge would ultimately mean committing to the rest of the loop – given the ridge itself is some 3km long including the climb to Ohuinga, followed by what would turn out to be the real crux (descending Ohuinga up onto Black Ridge), it was an important decision. When I asked the question “does anyone not feel confident going for it?” I was met with complete silence. This was enough for me to make the call to get stuck in. I felt very comfortable and confident (even with the wind) having seen the way the team had held themselves until this point; I knew I was in some strong company.

So, at just after 1pm we went to take on the mighty Sawtooth Ridge. It wasn’t long before we were in full scrambling mode. Some of the most challenging sections are here on the southern end of the ridge. The addition of the snow and icy patches on the Eastern aspects rendered a few sections of the sidling path unusable, or at least, much more risky than they would be in summer. Therefore the best option was to go up and over, leading to more than one section of straddling the ridge and shuffling along. The wind wasn’t nearly as obtrusive as we had speculated, which made the scrambling very fun indeed. Approximately 1km up the ridge it opens up onto some larger flats for a little respite. We stopped here for our second lunch at 1.45pm and actually baked a little in the sun whist completely protected from the wind. I knew here that we were absolutely committed to completing the route which in a way helped reduce some of the anxiety from earlier as we knew we didn’t have to worry about making those hard decisions. What I didn’t realise was that we were still 2km from the real crux of the route..

The ridge keeps giving awkward little scrambling sections right up until the final climb up towards Ohuinga. As we neared the start of the big climb to the end of the ridge, the clouds closed in and we lost visibility. It was here that we noticed the wind starting to pick up. Gradual at first, it soon became apparent it was here to stay and certainly growing in power. We finally arrived (after multiple false summits) on the summit of Ohuinga at 3:40pm, and had to crack out the GPS just to make absolutely sure we were dropping off the correct spur.

Less than 50m from the summit the spur splits, and both directions seemingly drop away into bluffs. After another few checks on the GPS our worries were realised – the drop we were looking at was in fact the correct way. It wasn’t until I’d clambered a few more metres that I saw a steep tussock slope appear before me. Three steps into the slope and I knew it was crampon time. Had we not had them we’d have been there for a very very long time as whilst the snow wasn’t too hard, it sure was slippery. I made a slight miscalculation at the bottom of this section and told everyone they were safe to take their crampons off, only to reach a single section no more than 10 metres long which once again was somewhat treacherous. Gus and I managed to down-climb a crumbly section but the others wisely opted to get the crampons on again and sidle below on another snow slope.

From there we were across the saddle and HUGE slips (they really are impressive) and on our way ascending up to the Black Ridge. We had enjoyed an hour of protection from the nasty westerly wind and had hoped that we’d be protected further given we were now on a much lower ridge underneath the impressive Sawtooth. We were wrong. The wind at this point went absolutely nuclear. Staying on our feet was a full time job for the next 2 hours. Every 2 steps forward was tempered with 4 steps to the left, and you sure as heck didn’t want to turn into the wind as your pack would literally act like a parachute and lift you backwards. And this wasn’t just gusts – this was constant. Relentless; so much so that more than one of us later admitted to screaming futile curses into the wind in frustration.

By this point we’d been on the move for almost 11 hours, but with this wind it had felt more like 13. We were all spent and couldn’t face another 2km along the open tops (in the dark) before the steep descent to Daphne Hut. We instead called it a day at the cute little Tarn Bivvy, where Emily, Zuzana and Lukáš kindly offered to cook the group dinner in return for claiming the bivvy, whilst the rest of us put up the tents. The sense of satisfaction and contentment that night was palpable; the wind continued to roar long into the night, so much so that every 20mins I left the bivvy to check our tent wasn’t about to blow away. We eventually called it a night and had a very eventful rest until the weather gods finally decided we’d had enough punishment at around 5am.

We awoke to pure vindication; the most incredibly calm and crisp morning on the tops, followed by an unbelievable sunrise. I was lucky enough to be enjoying the use of the completely exposed outdoor toilet just as the sun crested over the horizon; something to tick off the unplanned bucket list, but not so good for the rest of the team who were trying to take atmospheric photos of said sunrise, only to have a man stand up into their shot to pull his trousers up!

The whole team felt like a million dollars after a good breakfast and calm conditions. I just remembered to pick up the lonely geocache next to the bivvy (which had last been found in April 2015!) and just like that, we were off again. It was a slightly longer Sunday than we had planned, but it was definitely the right choice to camp up high. All the signs suggest it’s around 3.5 hours from Tarn Bivvy to Daphne, but we did it in 1.5 hours. It’s quite steep near the bottom but nothing of note. Quick stop to sign the book at Daphne (this is a lovely hut in a lovely spot – worth the river travel to get to) followed by approximately 0.5km of river hopping to get to the start of the track up and over the final ridge back to Kashmir Road.

I was feeling particularly spritely so offered to race on ahead to tack on the extra ~2km walk up Kashmir Road to collect the van, as we exited from a different spot. I had hoped that I could hitchhike but it was all quiet once I reached the road. Just as I was reversing the van into place at the Daphne car park, Gus came into view, followed by the others over the next 30 mins.

I have to say this was one of the more memorable trips I have done – the terrain, “interesting” weather, solid team mates and all round adventurous mindset made this a brilliant couple of days. The Sawtooth deserves the accolades, however isn’t quite as full on as some might have you believe. As long as you are comfortable with basic scrambling and careful and confident movements, it’s exhilarating and throughly enjoyable. Do not underestimate the terrain when traversing between Ohuinga and Black Ridge; there are some sections that can be a little demanding and the general environment is breathtaking and jagged to say the least. Also bear in mind that the Sawtooth Ridge is high, with even higher peaks bookending both the start and finish.

We didn’t have any indication that the wind would be as bad as it was, but we had a strong enough team to deal with it. As with all trips, make absolutely sure your teams capabilities and confidence match the ambitiousness of your objective. We made the right choice to head to Longview on the Friday night as the Daphne route in the dark when you’re tired could be quite demoralising, especially given you will be walking in with wet feet. One thing I know for sure; I’m in love with the Ruahines.

3 thoughts on “See-the-Saw Soaring into the Sky”