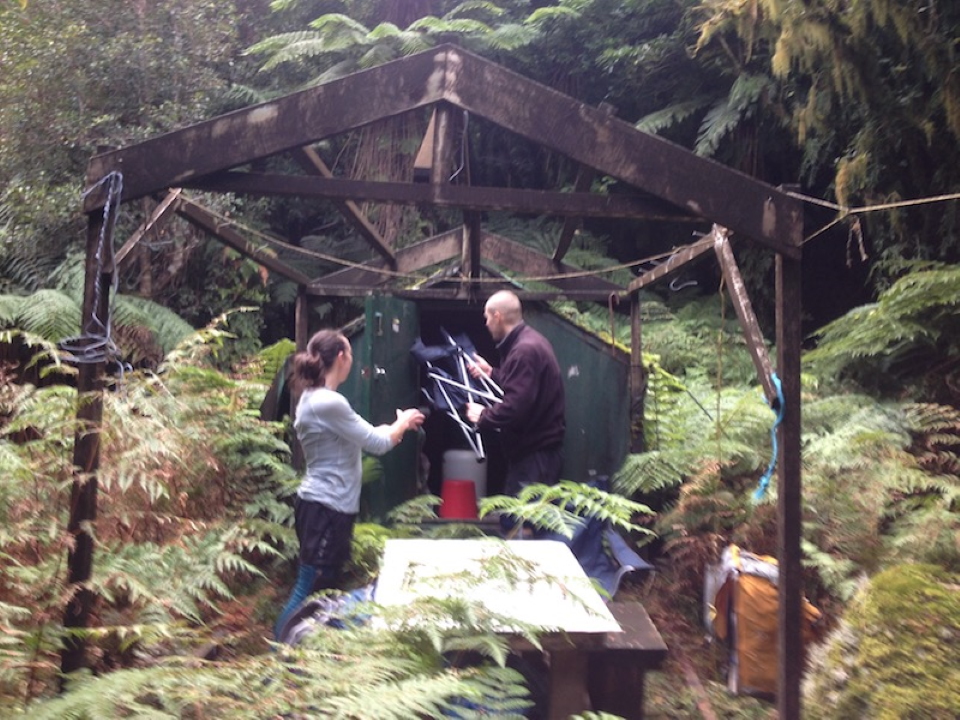 Megan and Sam arrived at the train station to meet Simon on the Friday night, and the three of us were the only ones rattling around in the WTMC van. We stopped briefly for pizza & kebabs at Carterton, then drove to the Holdsworth road-end to arrive at about 7pm. We then hoofed up to Atiwhakatu hut, and up Raingauge track to Jumbo hut.

Once we got to Jumbo at about 11pm, we noted the high winds and wondered if others were inside, as there was no gear on the porch. Once inside we discovered five people sleeping there – oops. We quickly apologised for our late arrival then set up for a windy night.

In the morning, after a quick brekky, we set off to Jumbo peak just after 8am. The wind progressively picked up and then became the strongest of the entire trip. High winds were forecast for today, but to ease later on. Under scudding clouds we picked our way over to Angle Knob. Having traversed this peak before, I kept an eye out for the scree chute that heads down to the right, after the peak. Taking this makes for an easy sidle around the worst jaggedy-rocky-bits to get down off Angle Knob proper.

We then descended to the small tarn marked on the map for morning tea, during which time, Angle Knob clagged-in completely, then cleared again. After some walking through tall grass sections, we arrived at the grave markers for the pilots from the 1955 Devon air crash. We then (respectfully) checked out the wreckage. The last WTMC trip here in November 2017 was noted in the geo-cache at the wreck.

We then gained a little bit of height to find the spot to descend down the ridge to the Waiohine river. The going was fairly straightforward but contained challenges in places requiring some back-tracking upwards at least twice. We stopped to have lunch, and then, from pt 736, we headed NW down to the mighty Waiohine river. Near the bottom the terrain didn’t look too flash on the left hand side, so inevitably, we came out a couple of hundred metres up the creek draining from the base of the Shingle-slip Knob slip.

The creek was fairly intimidating with a few waterfalls higher-up. It had very steep and slippery sides. Opting for the latter route, Sam scuttled down the true-left bank, while Megan and I opted for the (very-Megan!) in-creek canyoning descent. This proved to be tricky, but nothing like the 3-4m rock wall that Sam slid down to exit (feet-first causing injury and swelling to both his hands).

Going down the Waiohine river was what you would expect, with a few waist-deep pools and house-sized rocks to deal with. Getting close to where Jacs Flat Bivvy should be, we all spotted a large horned goat on the bank, idly gazing at us with minimal interest. Sam was first to spot the gazebo-like framing up the bank, at the front of the bivvy, some metres back from the river.

We headed to it and marvelled at its dampness. To preserve its life, someone had stretched a big durable tarp over the roof and tied it securely down. The bivvy had helicopter ropes attached to each corner, showing that it must have originally been dropped-in whole. The door was stuck at the bottom with dampness and took a bit of prising open. The inside was surprisingly good, with only a thin layer of black mould on the roof and top part of the walls. It even had DOC mattresses! We let the bivvy air out a bit.

There was a fireplace outside which we used to fire up the billy.  We then sat around, cooked pesto pasta for dinner and lounged in the deck chairs (provided). After dinner we had some really great conversations before going to bed at a civilised 8pm. The night was very cosy for the three of us, and even though I set my alarm for 6am the next day, I slept through it, to wake us up at 7am. We had a quick brekky and pack-up, reinstated the bivvy to its original condition, and hit the proverbial.

For Sunday we had previously made a short-notice change of plans – instead of heading back the way we came, Megan originally considered that we could ascend in Francis Creek. But Sam suggested that we instead go up the ridge south of Francis creek and ascend via the spot heights. This required us to head down the Waiohine river for about 1.5k’s, requiring some tricky river travel (and possibly full immersion in places).

The river travel wasn’t bad for the most part, at least until things got gorgy on the map. 100m or so before Francis Creek joined the Waiohine river on the true left, we encountered a huge pool that required a full pack float. We were already very cold (and shivering) at this point and were seriously trying to find ways around that wouldn’t require such full immersion.

Having not done this before, I wasn’t feeling that confident. However once Megan and Sam got into the pool, I also got in, back-first. The pack (sealed with the internal pack-liner) provided great buoyancy and I went well for 10 metres or so, but then realised I wasn’t moving very fast. Megan and Sam were moving faster, plus I was on the side of the pool where a strong breeze was pushing me back the way we came. I suppressed the urge to panic and tried pulling myself up the rock wall on my side (but this didn’t help much).

The other two reached the other side of the pool and began stripping off their cold clothes. Sam ended up coming around the top of the side of the pool and clambered down to get me out of the water (looks like there was a way around the pool after all!) This route was hairy but navigable, and we then ended up on the far shore. Hastily changing clothes, Sam fired up the cooker and we had hot sugary drinks (violently shivering under an emergency foil blanket) for about 20 minutes. When we felt better, we headed up the near-vertical spur on the true left side of Francis Creek.

No sooner had we started up than we hit a large step almost 2 metres high. There was a nice solid tree at the top of it, but we really needed rope to get up, and the drop down to the creek was vertiginous. Sam again came to the rescue – he scrambled up, while Megan assured me “you can do it Simon…!” We passed our packs up and Sam tied his fly around the tree, which we used as a rope to pull ourselves up. Sam grabbed us and we belly-flopped on the ledge above (all still feeling weak from our recent experience).

The climb eventually levelled-off, and we stopped for lunch at pt 994. We then resumed to walk up past pt 1078, to arrive at the bush-edge on the northern point of Isabelle. The weather looked murky in the open. From here we sidled at approximately 1250m to the Isabelle/Holdsworth saddle, then – rejoice! We were on the track up to Holdsworth. From there it was a steady grind up (in rejuvenated high-speed gusts) to the trig, then down past Powell hut (which is looking very nearly finished), to the carpark via Gentle Annie track.

Despite some gloomy predictions about when we would finish that day, we got to the van at 7pm. On the way home we debated what we could have done better. We all agreed that we made group decisions, which we were all responsible for. Unfortunately, given our late-notice change of route, we weren’t able to extensively research surprises the river could hold (and I’ts not certain that we would have found this information anyway).

Ultimately, we should not have gotten into that large pool in the cold temperature that we had, as we were already too cold and the water temperature was lower than we realised. We should have searched for a route around it (or turned around). Normally pack-floating is fairly awkward but pretty doable, however the conditions and temperature made the float extremely difficult. This was something we didn’t fully appreciate due to how the temperature affected our thinking.

We all came away feeling that the trip was a great success, but one which made us think a lot more about risk assessment!