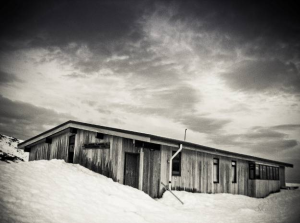 When signing up in the balmy month of May, it wasn’t there yet. And even for many long weeks into June, there was hardly any snow on the ski fields at the big hill in the North, which we can often see on a clear day when tramping in our Tararua backyard. 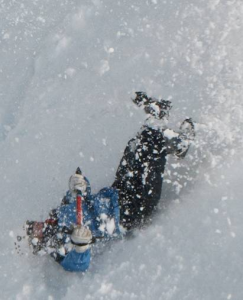 However, we still believed the group that had signed up could be good at the ‘craft’ bit, as we learned from web research:

“Historically, craftsmen tended to concentrate in urban centers and formed the guilds. Trade occupation and the need to be permanently involved in the exchange of goods also demanded a generally higher level of education and in societal hierarchy the craftsmen were usually in a more privileged position than the peasantry.” 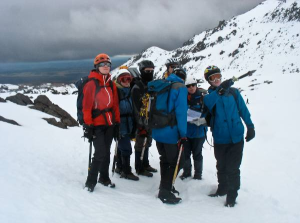 On the last Wednesday before the big outing we collected our tools to clearly distinguish ourselves from the mere peasants of our society: an ice axe and two kinky thingies to tie under your boots. Those who remember Mike McGavin’s valuable contribution to the 2009 WTMC Journal will appreciate what an ice axe does for your self esteem. 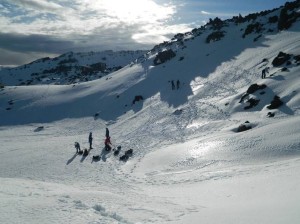 And thus we went with an overdose of confidence (or was it pigheadedness, considering the weather forecast?) to the big hill in the North, surviving kebabs, curries and bulls on the way, only to be blown off our feet at the Top o’ the Bruce. On Saturday morning all eager students were divided over two manageable herds, and yes – 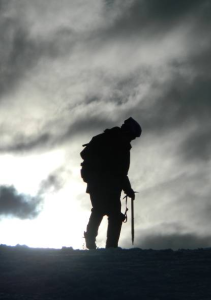 we did listen to the good advice although turning it into practice was sometimes challenging. Let’s just say the first weekend of the Snowcraft course was a success, and let the photos of the Podium Group do the talking!