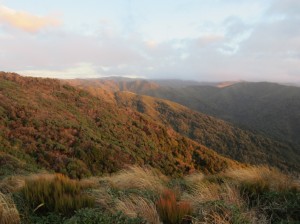 After having come into contact with WTMC for the first time only 2 Wednesdays earlier, here I was at Wellington train station meeting a bunch of random people for a weekend in the Tararua ranges.  First good sign was a newish, sturdy looking WTMC van in the car park with 2 or 3 people milling about nearby one of whom commented, as I strode over, “you’re looking far too good for this time of the morning!” I thought “we’re going to get on fine!”

We chatted and drank bad takeaway coffee while we waited for the last of the punters to arrive.  Once all present, we piled into the very spacious van and made good time to Shannon where we stopped briefly to grab some more coffee and carbs and where an interesting lady in the cafe made it known to all that she wasn’t happy about me leaving the door slightly ajar.  Good driving by Ray on the gravel road for a while that took us into the ranges towards the Mangahao river where we parked up at the upper dam.  The day was starting to warm up quite nicely by that point as we found our stride back along the road to the start of the track that would take us to Burn Hut. 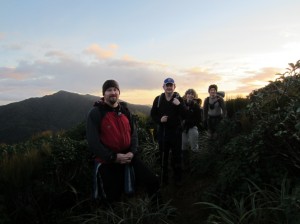 The first section was pleasant then quickly got narrow and steeper as we progressed along the banks of the river up into the forest.  We seemed to have quite a range of ‘foot planting confidence’ in the group but we ambled along at a steady pace. There was the occasional scramble over trees and an impromptu rest stop a little way along after one of our group lost their footing and ended up down the bank getting a closer look at the river. We carried on through to what would be the biggest climb of the weekend, a few hours worth, a little steep in parts and feeling very good after having found the zone.  Tummies soon started rumbling for those who hadn’t indulged at Shannon so we stopped for lunch under the canopy.  We tramped through the afternoon, fuelled by the occasional chocolate fish from the stash I’d brought along (an idea nicked from a trail running event last month where the marshals were handing them out to race participants and trampers – brilliant!).  As we neared the end of the climb, the day was starting to draw in.  We were rewarded with a beautiful light that moved rather quickly into sundown which drew attention to the semi-alpine freshness we were out in.  On top of the ridge, Burn Hut came into sight looking right across the valley, and we headed for our home for the night. 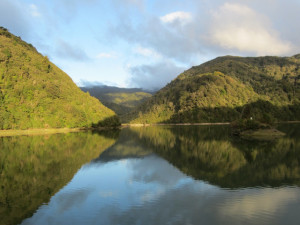 As it turns out, the hut wasn’t as close as it looked and the track deteriorated, along with daylight, so that progress was slow.  This last stretch in the dark took longer than anyone had anticipated and, after a tense moment re-gathering as a group that had split for a while, we trudged and stumbled onwards until the hut eventually came into sight.  I think we were all pretty happy to see those 4 walls and we set up house and home, shovelled down a hot pasta meal, put on some more clothes and nursed a brew before diving into our sleeping bags.

Ah, the glorious feeling of being horizontal after a days tramping.  Under a full moon we rested, then in the morning slowly woke and prepared for the coming day, the plan being to complete the loop back to the dam where the van was parked.  After a bit of inevitable group faffing (or fluffing as Margaret called it, I had to point out that was a completely different activity altogether!), we set off on day two.

A climb to 830m at the start helped us keep warm and not take too much notice of the low cloud and drizzle which luckily dissipated as we descended down to the bush line (which is when the sun came out of course!).  The lush bush was a welcome change of scenery after the scrub and tussock of the higher points.  We chatted and lunched under the canopy finding great hilarity in our Sunderland-born Ian saying ‘Wallies’ instead of the NZ famous ‘Watties’ brand.

A short descent brought us back to the river.  Now, Ray had mentioned a ‘river crossing’ on Sunday and this is what we did for the next hour and a half, spending a fair amount of time in the river as well as crossing it; not sure about anyone else but I got a lot more proficient at finding stable ground in a river!  We caught our breath after one of us went for an unexpected swim at the bottom of a small waterfall, and eventually the track markers appeared on land again, hooray for that!

After 6 hours walking, our energy levels picked up again for the home straight back to the bridge over another impressive dam, then back at the van.  The panini and latte that we’d been discussing had to wait as we drove past a shop in Shannon that had shut up shop for the day.  Instead we had a short roadside stop to find some tools to tighten the bolts on one of the wheels that had come loose from a previous tyre change: minor catastrophe averted, well done Ray and Daniel!  I’m a stereotypical woman when it comes to vehicles and their noises!

A sunny and satisfying end to the weekends tramp.

All back safe and sound, we went our separate ways to homes with heating and hot showers and I was left with the feeling of having been on another planet for a time – very invigorating and refreshing and pleased to have completed a reasonably challenging (actual easy/medium) tramp with the WTMC.  Although I’ve reined in my ambitions regarding the difficulty level of my next trip, I’ve already signed up for my next one. Bring it on!  Thanks to everyone for a memorable weekend.