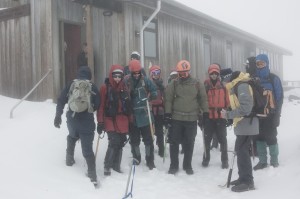 Ah what luxury! Showers, flushing toilets, running water, electricity and hot water on demand! I speak of course of the opulent WTMC lodge a stones throw away from the Top O the Bruce on Ruapehu.  Compared to huts, even Great Walk huts(!) the lodge presents a sense of civilised creature comforts that are otherwise sacrificed by trampers.  We rocked up at 10, or was it 11? With meagre snowfalls during the week the mountain was closed and we were spared the school holiday induced crowds.  The snowcrafters were quick to find bunks and otherwise generally excited to go up the mountain. 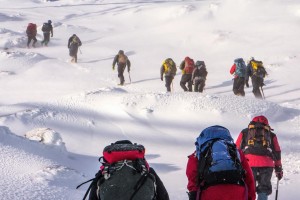 The forecast the next day called for cold wind, showers and temperatures above freezing, or in tramping terms – instant hypothermia. In the morning, the west facing windows of the lodge had a swirling pattern of frost and there was a spattering of snow around outside. For us city slickers who hadn’t seen snow in years or ever, the prospect of going outside was exciting. The hardened mountaineers however took one look outside and stated that ordinarily they wouldn’t even bother going outside. 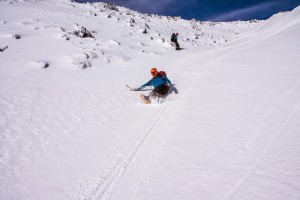 But that would not deter the eager snowcrafters! After sketching out a rudimentary plan to navigate between the huts and snowy volcanic ridges we set out into the icy damp mist.  First takeaway was that navigating in a strange area, with no discernable landmarks and low visibility is more difficult than it appears.  After stumbling around in the snow covered rocks and the freezing misty rain we went around and found ourselves back at the lodge.  A kind of a circular exercise if you think about it.  After some theory based stuff we went out again and this time kept more together as a big group.  We got quite far up the mountain this time scrambling over some rocky ridges, where the snow was so low we could appreciate the volcanic nature of the mountain we were on.  Cooled lava blocks formed flowing cuboid formations, reminiscent of what you might see around Mt Taranaki.  We got back to the lodge and I started making dinner, being allocated the task after foolishly boasting of the prowess of my mean Spag Boll. 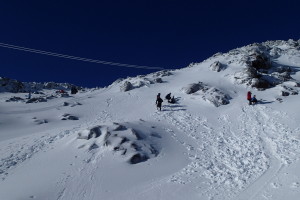 The lodge pantry was well stocked and this included the meat, which was frozen in a solid block.  My first thought that it was a huge amount of mince, but then again there was a lot of us so whatever.  After some excellent help from Ned, Kirsty and Shay to get the veges prepped I started cooking the spag boll.  The first feature that was immediate is that the heat output of the lodge stove was inadequate, on its full setting it was probably a 3 on my trusty Fisher and Paykel back home.  On the upside this means that the bottom of the pots don’t get burned, on the downside it means that everything takes much longer to cook, particularly when you have a full pot of mince and veges on the go.  Ah the mince, yes, the unfrozen block revealed itself to actually be two 2-kilo blocks and not one.  So we had defrosted twice as much mince as was necessary.  After stirring it all into the pot, the biggest pot in the kitchen was literally half full of mince alone. 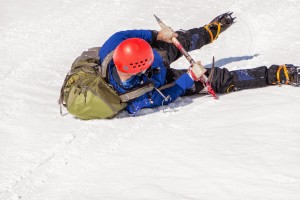 Oh boy, I’m gonna need more tomato cans than I thought!  After fine-tuning the recipe and adding more liquid to it, I put the lid on and let it simmer.  Meanwhile the troops were going hungry and restless.  Getting towards 7 I put on the water for the pasta, which literally took half an hour to bring to the boil.  I missed my target time of 7pm but after some scrambling and improvisation, dinner was well and truly served by 7.30.  Nervous about the outcome of the meal, I sat down with apprehension.  Silence.  Which I am told is the best compliment for a chef.  But then some fellow snowcrafters congratulated me on a job well done.  Phew. 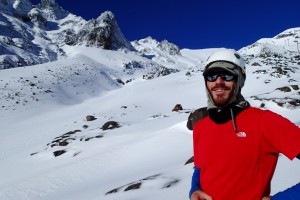 The weather was much better the next day.  After an alpine-ish start we had breakfast and got ready to head out for our first taste of cramponing. We had some snow overnight but it was just a little dusting around the lodge.  It was enough to freeze around the car park however, and someone made the comment that the last thing we want to do is fall over in all of our mountaineering kit.  We walked up the snow trails, with the weather being just cold enough for snowmaking and the skifield operators being desperate to get some snow going the snow makers were cranking on.  The only problem was it wasn’t quite cold for the snow to freeze, so the snow makers were blasting out a fine hyperthermic mist.  Nevertheless we kept going as the terrain got steeper.  We came across a decent snow bank that was a bit steeper than the gentle machine-groomed trail we encountered.  Marie and David said this would be a good spot to try to go up using our boots to kick steps and ice axes for support.  The terrain turned out to be of variable quality some softer snow, some snow with an icy crust on it to quite hard compacted stuff.  Eventually we got to the top after a lot of hard work.  This mountaineering stuff was beginning to prove to be hard work.

At the top we put our crampons on.  The Russian term for crampons translates literally to “alpine cats” and with the crampons on my boots for the first time I could see why.  I suddenly felt like a cat would feel running across an expensive leather couch – all that traction!  Marie said to try out the crampons by going up and over a litte rock.  Defying all logic and gravity the crampons actually held on, wow brilliant stuff.  As we went across further up the trail I was amazed how much easier it was to walk on firm snow with crampons, there was a further sense of balance and you didn’t have to expend energy kicking enormous footholds.  As we went further up the trail we came across a steep-ish gully.  Uh oh, turns out we went the wrong way! As we contemplated our options I just had to say something.  To me the gully looked steep but pretty good, there was a rocky ledge on the other side, but one that we could clamber over and it was nowhere near as big as some of the rocks we encountered on the previous day’s foray into the frozen mist.  Also I didn’t feel like dropping lower and then walking up the the far side of the slope, to me the gully looked like an easy shortcut.

Oh how looks can be deceiving! The old saying of “it’s always further than it looks, it’s always higher than it looks and it’s always harder than it looks” needs another component – “it’s always steeper than it looks”! I was leading the group across the gully with David confidently strutting just above me.  At first it was steep but the crampons were holding.  As we got towards the middle of the gully there was a faint dusting of snow on top of much firmer packed snow.  I felt my crampons slide forwards and down.  Not good I thought! But David was calm and reassuring.  One step behind another, one step behind the other, and I was over to the rock ledge, body coursing with adrenaline.  The ledge proved to be bigger up close and the rocky step below it smaller.  I couldn’t quite muster the purchase to vault myself up the ledge, and with one leg on the ledge I didn’t feel all that balanced.  “Hey try this” I overhear and Sharron handed me the mighty Reinhold.  With two axes, one in each hand getting up the ledge was a doddle.  After standing on a flattish bit of snow Sharron says to me “You’re a real mountaineer now”, and the group gave me some words of encouragement.  All I could must at that point was to blurt out “Oh god, everything is shaking!”.

We found ourselves some nice gullies at the base of the Pinnacles to practice our self-arrests.  Paul showed us the various techniques.  Start by lying on a gentle slope, with your ice axe pick into the slope in the self arrest position.  Get your feet up and pull the pick out so you start sliding and put it back in to stop, to get the hang of the thing.  After that we went up the hill to try self arrests on our front, back, and eventually head down.  Man, you have not lived until you’ve done face first self arrests, the feeling of the speed is exhilarating, as getting a face full of ice shavings when you get your ice axe planted.  I had a couple of goes and got my confidence up, but as I quickly found out the mountain has a way of making you real humble real quick.  Trying to self arrest head down on your back, I got the hang of it first time! Great I thought! So why don’t I try my left hand… well.  Disaster struck on the attempt.  As I went down the hill I tried to get the pick in, and it just wouldn’t go.  What to do next… uuum…. well.  The funny thing is my brain went completely blank.  Like properly blank, as in, buddhist monks would be proud of the zen-line nirvana I achieved in the 5 seconds or so it took for me to slide down.  Next thing I know I’m lying on a pair of crampons, surrounded by backpacks.  Apparently I went down quite fast, hit a bump, got some air and straight into the pile of backpacks at the bottom of the gully.  Oh and a pair of crampons that were left on the snow.  No big deal.  I hated the awful Kathmandu goretex jacket I was wearing, and said to Marie how great would it be if I got a big tear in it so I could chuck it out.  Well I kind of got my wish, as I explained in Bivouac the next week, I had 7 little holes and two big ones.  Oh and I also put a nice hole in my rainpaints, dammit I actually like those.

We then went on to more steeper snow and ice, but at this point I’ve had enough.  It was getting pretty long in the day and with the earlier self-arrest mishap I was pretty much spent mentally.  Keeping in mind the subjective hazard stuff from the theory session, I thought it would probably be a good time to stop.  As I got up and down the snow bank I turned to Marie and sheepishly said, “Is it ok if I just come down?”  That’s it for me I thought.  We went back to the lodge via the ski run, and a gentle stroll at that.  On the way down I realised just how hot it can get in the afternoon on the slopes.  The side of the mountain turns into a giant concave mirror which seems to bake you from every direction.  We packed our stuff, loaded up the van and were forced to retreat back to the real world for a week.  But how would any of us fair in the real world when we had gotten a taste of that higher calling?

The Midweek was spent checking the weather forecast and the avalanche advisory on a daily basis.  The avalanche danger was up to Medium by midweek but then dropped off in time for the weekend.  The forecast initially called for two clear days on Saturday and Sunday, but towards Friday it looked like it would be miserable on Saturday and only maybe touch-and-go on Sunday.

To be continued next month…