20 beginner alpinists, 5 instructors, 2 teams and 1 mountain to conquer. Two packed vans and one car left a windy Wellington behind, with sights set on Mt Ruapehu. The drive up offered long and tedious discussions about what the name of our team was going to be, and to Brendan’s delight we settled for ‘The Loquacious Snow Leopards’, with our rival team being ‘The Frozen Chosen’. After arriving at the mountain at around 2200 hours, getting from the vans to the lodge proved anything but simple, as intense winds battered the snowcrafters as they were fighting their way up the hill. Luckily, we were treated with the lovely WTMC lodge with luxuries such as electricity, warm showers, comfy bunks and visions of getting up the mountain.

However, this proved rather difficult as the wind showed no signs of weakening the next morning. A tough decision to stay indoors for the time being was made by the instructors as the winds were nearing dangerous speeds. We all stared longingly up the mountain from the comfort of the lodge as Henry taught us the basics of navigation with the patience of a saint.

After becoming experts at basic navigation and enjoying lunch it was, to everyone’s delight, time to gear up and head outside. With clear blue skies and winds strong enough to make Wellington jealous, the two teams started making their way up the mountain. The wind had successfully cleared any powder snow from the ground, leaving an icy surface for us to enjoy. For us beginner snowcrafters, the ice proved difficult to get around on since we had left the crampons in the lodge. Fortunately, Sharron demonstrated how to fall, slip and stumble around on the ice on our way up Broken Leg Gully. Once up there, we practiced getting up and down some steeper slopes with the help of our ice axes. The 90-minute adventure left us with a little more experience, some spectacular views (we could see as far as Mt Taranaki) and a few sunburnt noses. 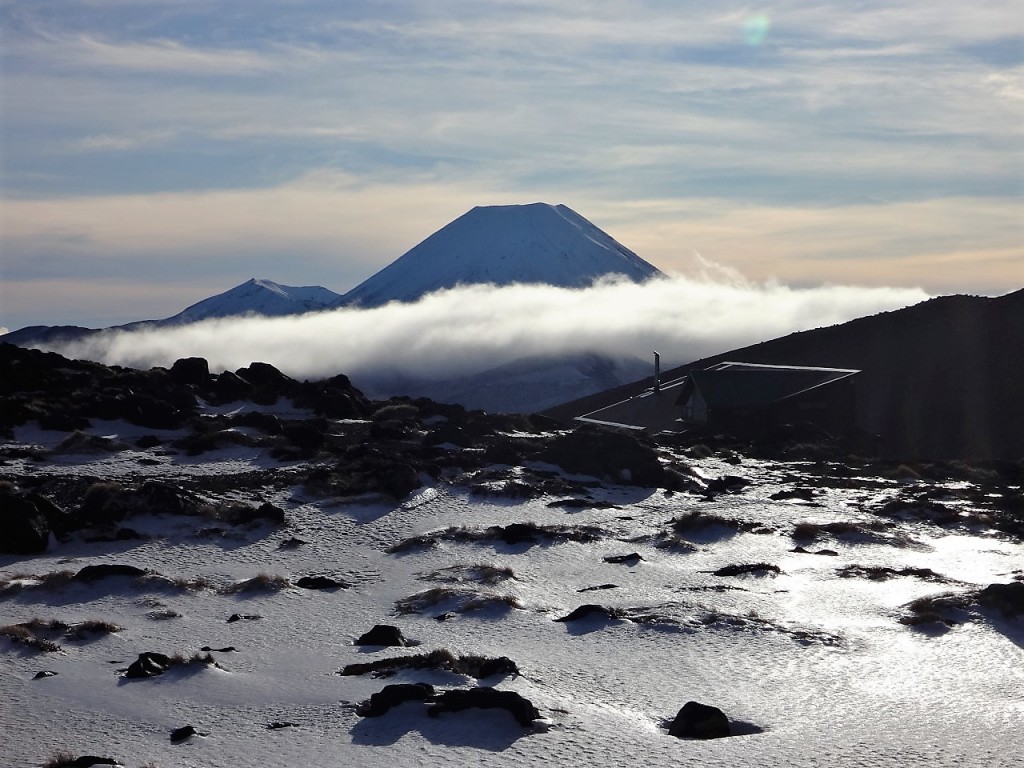 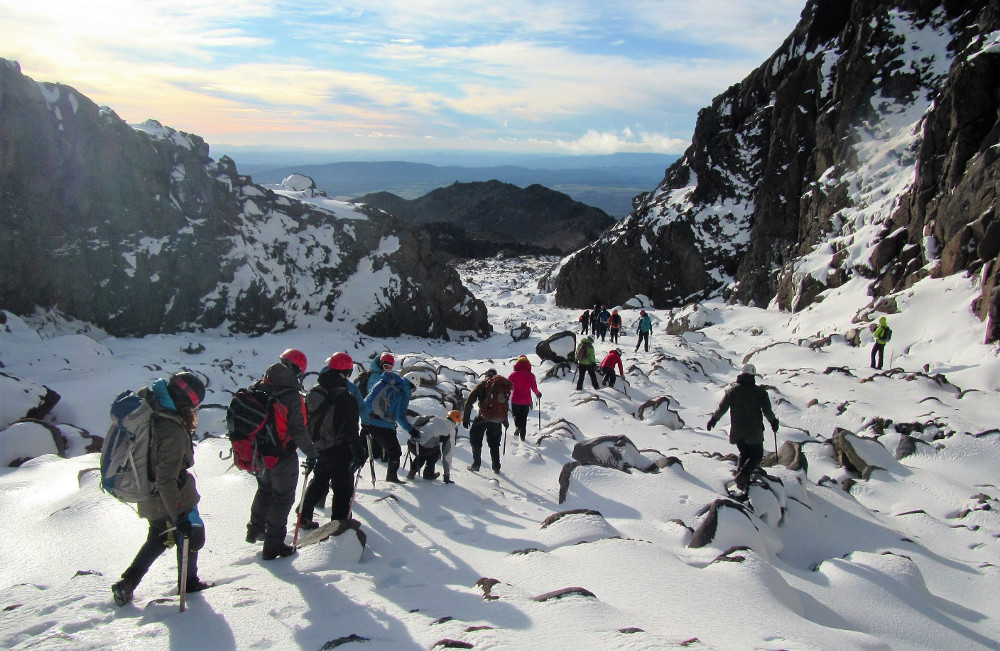 Once we were back at the lodge, the dinner-team began filling the livingroom with gentle aromas of a chickpea-curry. While eagerly waiting to fill our stomachs, we passed the time with an innocent game of cards against humanity that was won by Mike ‘Megawatt’. For dinner, a choice between a spicy and a less spicy curry was to be made. Growing up in a country that mostly serves meatballs with a lack of spicyness (that’s a word), I chose the latter of the delicious curries. This turned out to be a good decision as pearls of sweat started forming on my nose and tears began forming in my eyes. However, this did not stop anyone from getting in line for seconds and thirds until the pots were empty and the cleaning-team took over.

Everyone scurried off to bed, once again with visions of getting up the mountain the next day.

Morning arrived and brought with it amazing scrambled eggs cooked by Sean and the black nectar of the gods, coffee. The morning also brought with it the opportunity to gain some experience in walking around with CRAMPONS. The time was finally upon us to show the ice who was in charge. The Snow Leopards and the Chosen Frozen set out with a sense of purpose and just a few hundred meters from the lodge, the crampons came out. With the grace and ease of actual snow leopards, we scaled the steep and icy slopes, practicing different methods under the supervision of the knowledgeable instructors. After making their way further up the mountain, the Snow Leopards found an icy oasis to enjoy a quick snack and take the coolest team photo ever taken. The Frozen Chosen showed up shortly after to take the second-coolest team photo ever. 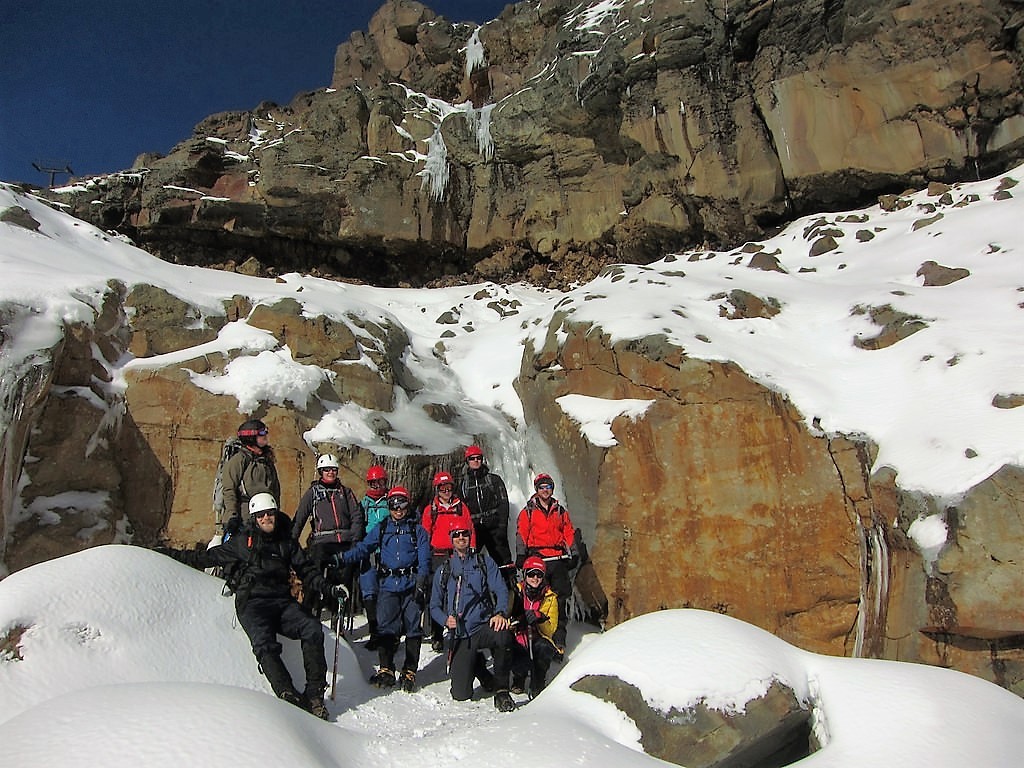 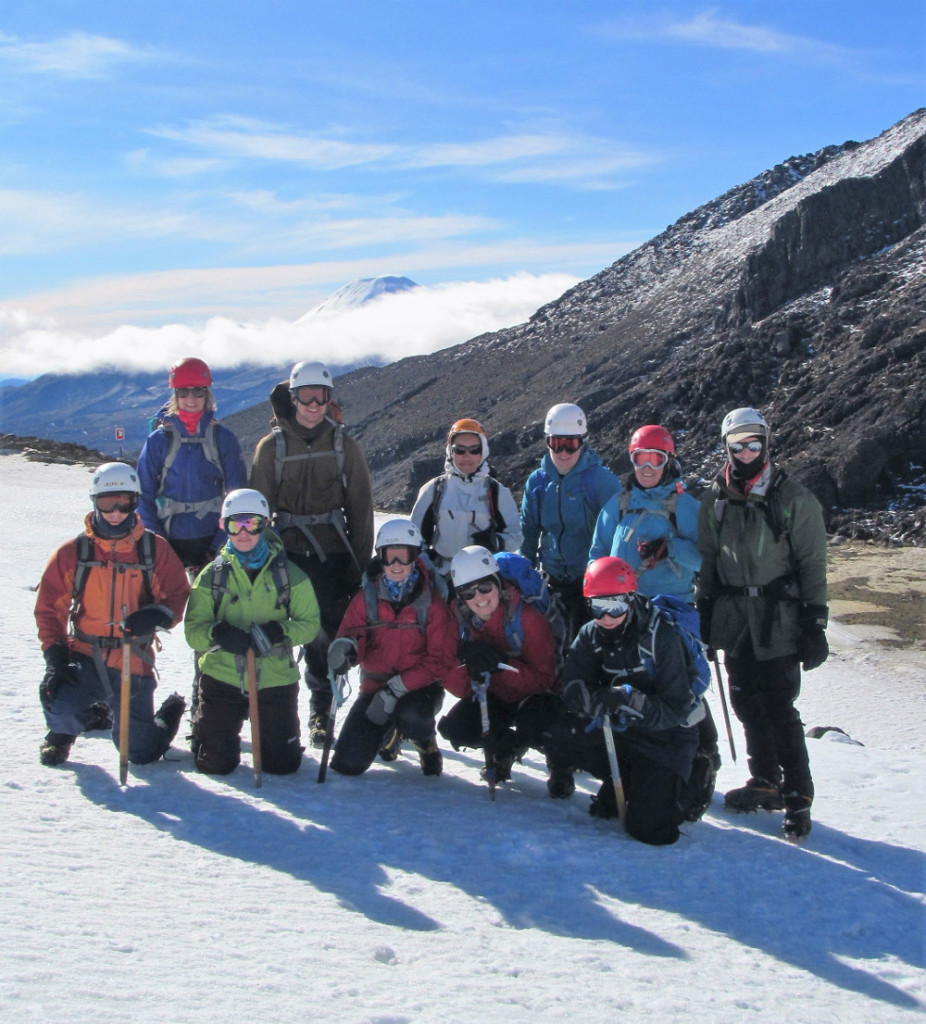 After the photoshoot came the most anticipated moment of the weekend as it was time to practice the art of self-arresting. Leaving our crampons behind, we made our way up a slope using the step-cutting techniques we had learned the day before. Following instructions from Brendan, Sharron, David and Henry the snowcrafters broke the first rule of snowcraft and fell over. We fell over on our backs, our stomachs, feet-first and head-first and used our mighty ice axes to self-arrest. Michael gave us a quick reminder of how slippery the conditions were and how awesome crampons are after he missed a step while waiting in line and came sliding down the slope. 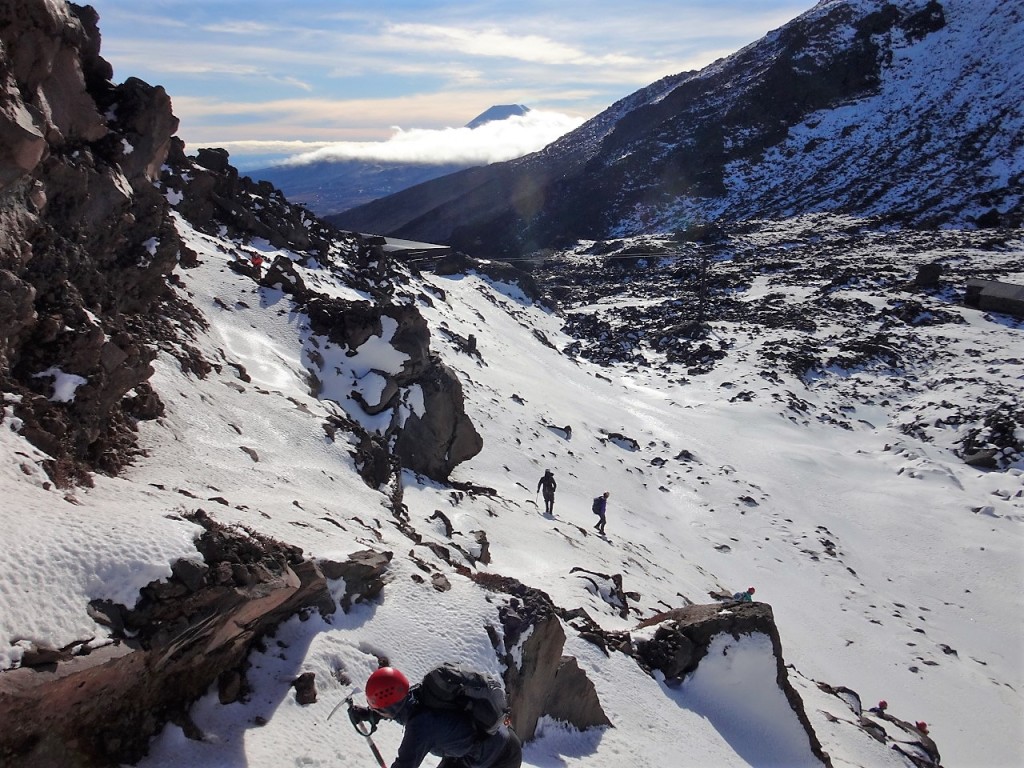 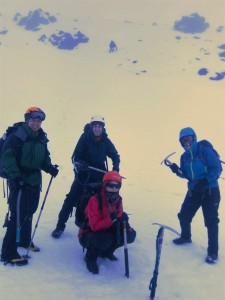 Being the faster learners, the Snow Leopards returned before the Frozen Chosen and had a quick lunch before starting to clean the lodge. The honor of cleaning the toilets was left for the Chosen ones. With Mt Taranaki still visible in the distance, we set off down towards the carpark and Wellington after a beautiful, but windy weekend. Spirits were high in the van on the way back, and sights were already set on the return to the mountain in two weeks’ time!

At last the time had come, again, to make our way up to Tongariro National Park. This time around, to the excitement of us snowcrafters, the snowline had made its way further down the mountain. Unfortunately, so had the precipitation. A mixture of snow, rain and a northwestern wind made for a slippery and wet walk from the carpark up to the lodge.

The next morning once again brought with it scrambled eggs á la Sean, but also continuing precipitation with low visibility. After being divided into four groups, we got to plan a short trip that would take 90 minutes while taking into account risks and navigation. After making the decision to walk up to the skifield and follow a chairlift up the mountain our group set off. Little did we know that said chairlift did not exist and we ended up having to change plans. Navigating in conditions with low visibility while looking for landmarks that do not exist proved too difficult for us experienced snowcrafters, so we headed back to the lodge without reaching our destination. Back at the lodge, the drying room was running at full capacity and the groups met in the common room to discuss their expeditions. Positives and negatives were shared. The problem of non-existent landmarks seemed to be a recurring problem and dynamic risk-assessment was something most groups handled quite well. 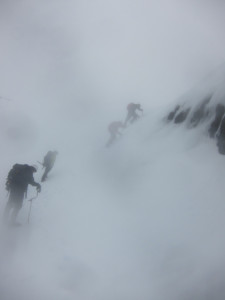 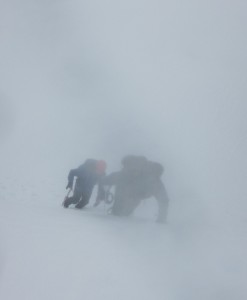 The inhabitants of the lodge devoured delicious scones and sandwiches for lunch and listened to David describe different alpine hazards and how to avoid them. Three groups set out with David, Henry and Nick back out into the snow. To use crampons on softer snow turned out to be more difficult than using them on ice, but was a much better alternative to no crampons at all. The group following David made their way up to the ‘amphitheater’, sinking deep into the snow with every second step. With every step further up the mountain the wind was getting stronger and we were getting wetter. After having reached the amphitheater with puddles in my boots, Jon offered everyone some hot tea from his thermos. Never have I felt the urge to marry someone as much as in that moment. The hot tea filled our tanks and we headed back for the lodge. The wind was coming in from the north-west and was picking up, pelting our faces as we made our way down the mountain. Right by the carpark, my “cabin-fever” set in and all I could see before me was a dry lodge out of these wet clothes. Just as I told Erik that I could not get any wetter as I was crossing the river, I stepped through the ice and sank knee-deep into the water, proving my previous statement to be false. 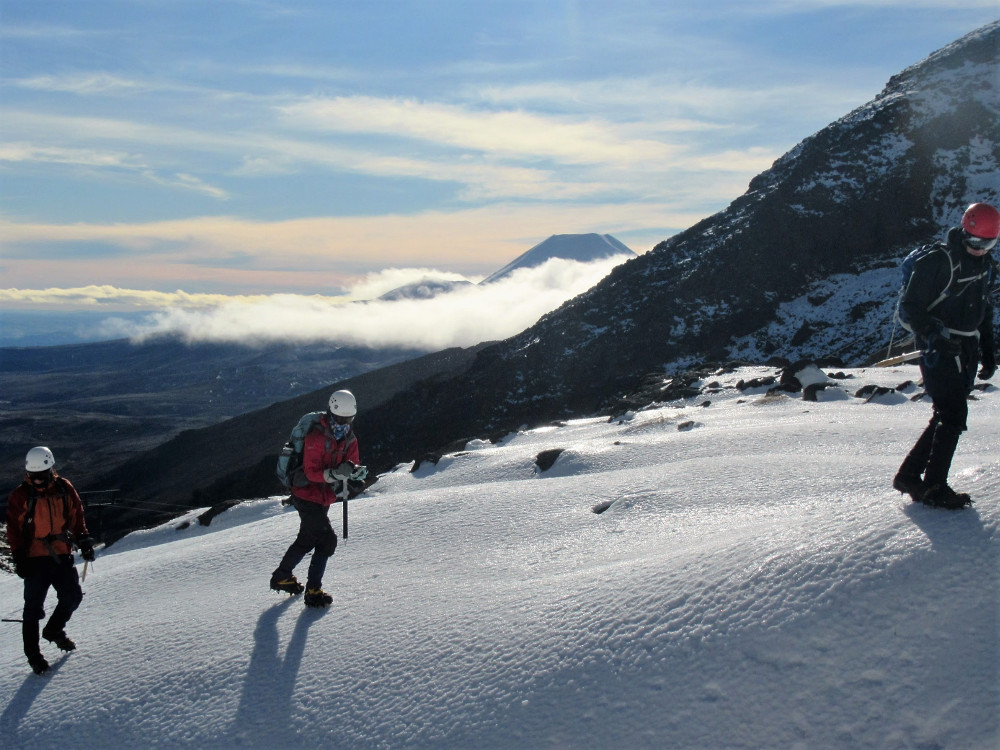 At least the lodge was nice and toasty, and the drying room up and running. The other two groups had also gotten nice and soaked while practicing more self-arresting, resulting in a crammed drying room which had a nice sauna feel to it being so humid. It would appear that a crammed drying room brings with it some consequences, as the humidity set off the fire alarm just before dinner was to be served. Oh how cruel the world can be. Twenty hungry snowcrafters left the comfort of the lodge as the instructors figured out how to reset the alarm so that dinner could be resumed. After a tedious wait in the Serac lodge (the family staying there were kind enough to let us wait inside), dinner was resumed, and it was the best. A word of advice to future snowcrafters – do not take the last piece of broccoli if Henry is next in line unless you are prepared to receive a stare so deep and intense it will chill your very soul. If you are reading this Henry, the broccoli was delicious! NO REGRETS!

After dinner, an amazing chocolate cake was devoured, with icing good enough to make me float. One too many servings were enjoyed, and one by one the snowcrafters rolled to the couches in the livingroom. Another game of Cards Against Humanity was initiated, with an almighty prize at stake; the honour of writing the trip report. With beads of sweat forming on each participants’ forehead, we looked deep into our dark souls for the winning cards. And here I am, the most horrible snowcrafter of 2016.

Due to the poor weather and the fact that no clothes had dried completely due to the overloaded drying room, a decision to go back to Wellington was made the next morning. Even though Sean overslept, there were eggs for breakfast, and they were great. The lodge was quickly cleaned and we left the lodge early, in wet clothes, and made our way back to Wellington, this time as professional snowcrafters. 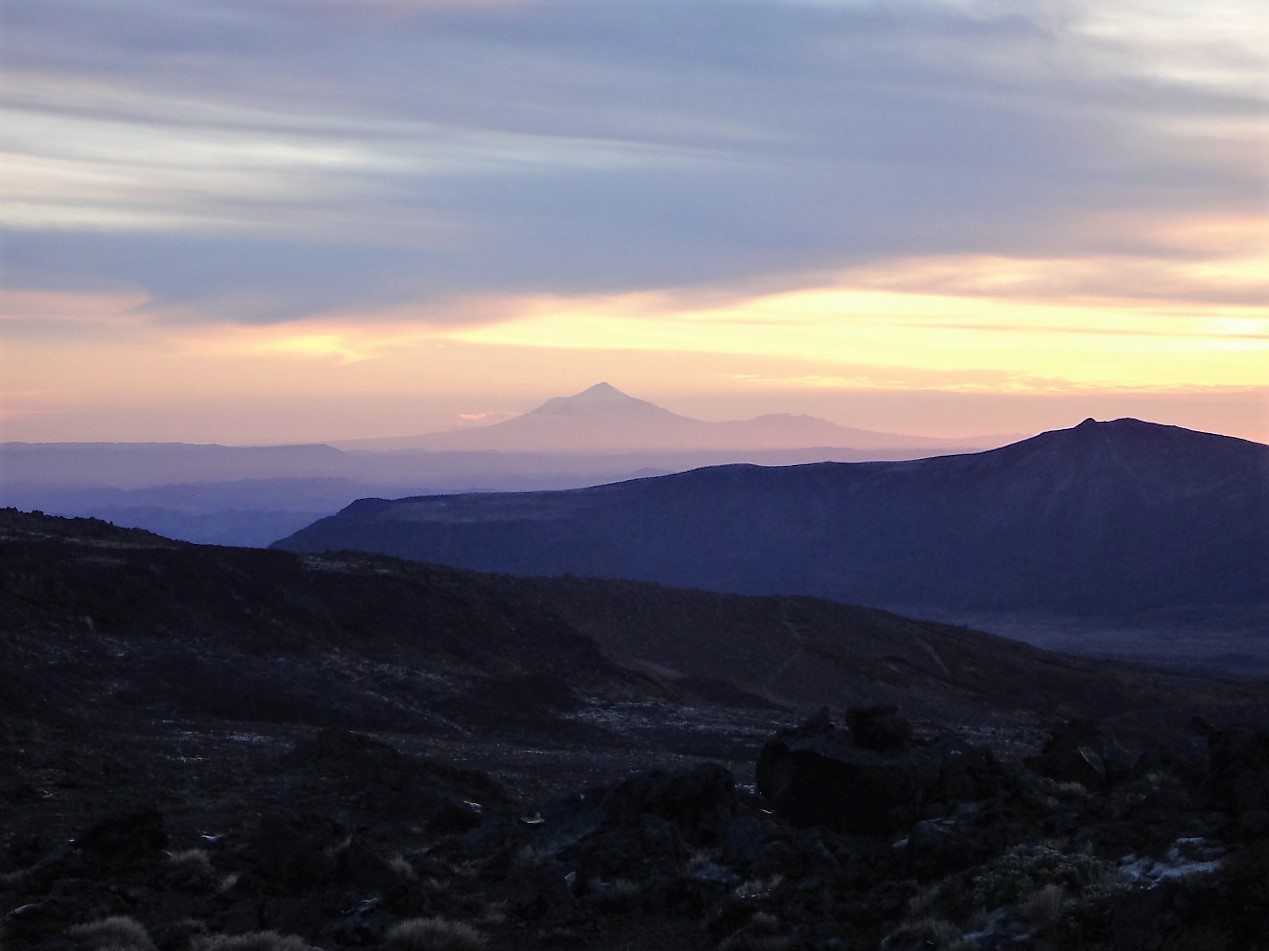 A huge thanks to all of our patient instructors for making our course in Snowcraft fun, enjoyable and educational despite the poor weather conditions.