This was a weekend traverse of Aorangi Forest Park, starting from the sea, ending at the sea, and going over some big hills in between…

Friday night we converged on Platform 9 and bundled into the club van to test drive the newly opened Smart Motorway. Opinions about its performance varied slightly but generally were positive. Arguably the traffic was smoother than normal – or could that have been Kevin’s seasoned skills at the wheel?

Various weather predictions were voiced and discussed. Most included rain and wind, though would it be strong southerlies tonight, rain overnight, or rain on Sunday? Hm. Depends on your preferred source of forecast.

Bucking the conventional sequence of events, we stopped at the pub BEFORE the start of the tramp to fill our bellies in preparation for the impending cold night. The Lake Ferry Hotel’s varied but decidedly fish-themed menu really hit the spot – that is, after some friendly negotiation around who would surrender the rights to the last meat pie. Meal ended, we were back in the van, and at the Putangirua Pinnacles Campground in no time.

As if on cue, Kim and Jim pulled up just as we were piling out and scoping tent sites. They were to join us for a while, before splitting off to do a spot of deer hunting (unrelated to the local shortage of meat pies, surely…). It was a lovely winter’s night, hardly a breeze, crystal clear, nearly full moon, and stars strewn across the sky.

Morning came with Kevin breaking peace by bringing the billy to boil. The predicted southerlies had not come to pass, thankfully, and the morning was brilliant and clear – albeit with a few suspect clouds perched on the horizon. At 8 AM, right in line with the plan of our intrepid trip leader Frances, we were on the track, headed up through the Pinnacles. Most of us had been there previously, but what a special spot – let’s check them out again! So we dropped our packs at the lookout junction and climbed the rocky slope to gaze up at the odd rock formations once again. 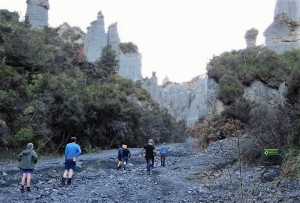 Back to the junction, and up the steady slog to the Pinnacles Lookout platform, just in time to meet the sun peeking over the hills. Beautiful. And a good time to shed some layers; the real climb had only just begun… 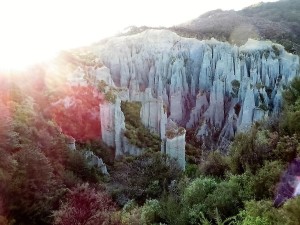 We were next greeted by an easy walk up slope on a 4wd track; a good chance to walk two or three abreast and chat. The shade revealed remainders of the night’s frost. The surrounds were regenerating bush – not so attractive, but low enough to afford great views from some points looking over Lake Ferry, Cook Strait, and the south island. Then the track narrowed, and the climb continued through some nice beech forest. Our pace was moderate and steady with regular breaks to transfer food weight from our packs to our tummies (a very useful strategy when tramping). 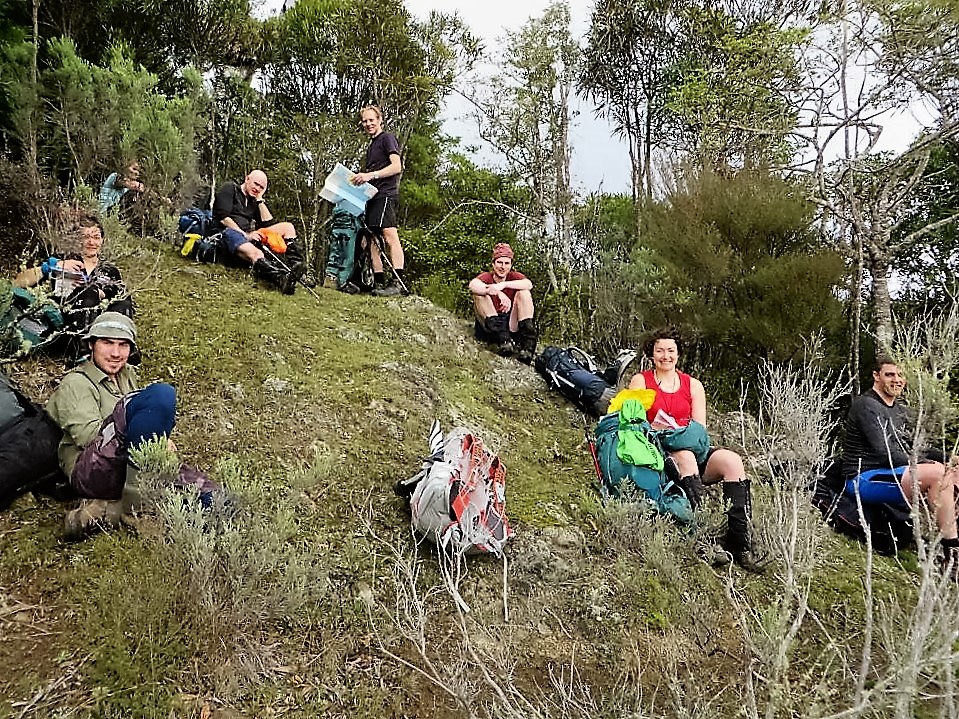 After one break, as if on cue the grey clouds streamed over and dropped a brief burst of hail. Job done, they streamed away again, leaving us in sunlight again. At noon, after reaching the first of the day’s two high points (each around 700m), we then descended the steep track to Washpool Stream. Directness was clearly a priority to the originators of this track – it was either up or down with little in between. The recent rains made sections of track into clay slides. Antonia decided that she qualified for a prize for taking the most falls, although we added that she always seemed to recover gracefully. Frances sensibly chose early on to practise her technical bum-sliding approach. All of us took slips or falls at some point on the trip.

Approaching Washpool Hut, Richard unwittingly demonstrated to the group how ongaonga (native stinging tree nettle) is a poor choice of handhold when descending a slope. We were to meet our new friend ongaonga again many times during the course of the trip. She loves the lower elevations, near streams. 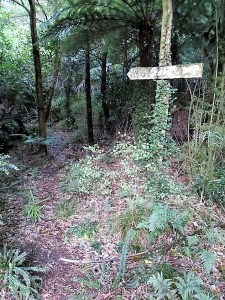 Washpool Hut provided shelter during a brief shower while we ate lunch. Lunch over, the sun returned; perfect timing. The crossing of Washpool Stream presented the opportunity for most of us to get wet boots…or wet feet, in David’s case as he tramped much of the weekend barefoot (what the heck?!). Then it was climb, climb, climb again – back up to 700m and a bit, and (you guessed it) another steep drop back down to Pararaki Hut. Again, great timing – we arrived around 4:30pm with enough sunlight remaining to get settled in. As it is a 6-bunker, Kim, Jim, and Frances volunteered for the tent option. 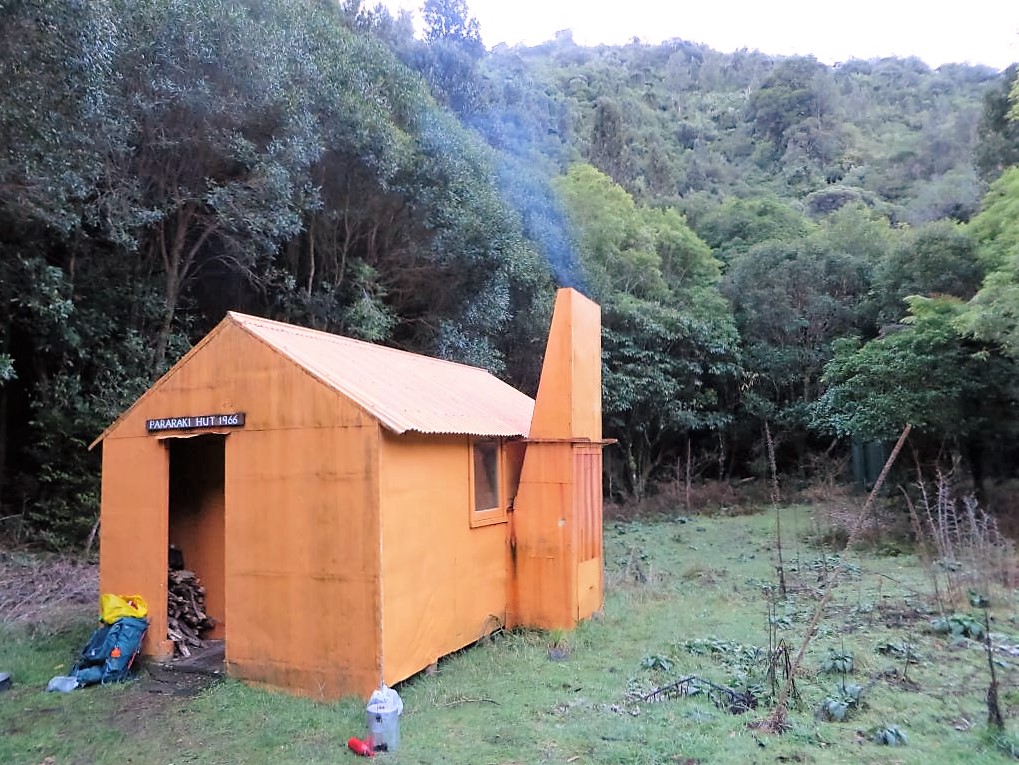 Water was collected, and cooking of dinner commenced. Jim headed upstream in the twilight to look for wildlife – though all he found was a sheep in the stream – the very stream from which we had just gathered water! Upon his return this fact sparked keen theorising about the likely incubation time of dire gastrointestinal illnesses, and the effectiveness of water purifying tablets. He did drag the sheep out of the stream – thanks Jim.

On the menu was kedgeree with optional tuna and boiled egg followed by special desserts carried in by Tony and Antonia (the coordination of names and desserts being pure coincidence). The evening involved pulling up chairs around the open fire (which sounds slightly more romantic than the smoky reality), and a background of Francis’ ukulele and singing (which improved the romanticness), and enjoying the sensation of a day’s work done well. The strategy played out by Richard during the course of the day, of coercing Bernie against his will to play cards, eventually succeeded.

Morning arrived with David first up to boil the now certifiably clean stream water for brekkie. It was yet another stunning morning, clear and calm. The southerlies had failed to eventuate – and in fact wouldn’t do so until the very end of the trip. The hunters parted ways, heading down valley to the coast.

Sunday started with a fairly quick walk up to a saddle and back down again with some tough sidling and then a brilliant bit of razorback ridge. 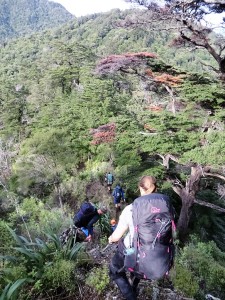 Then back down to the stream, with a few crossings to keep the feet wet. And an easy stroll along a flat grassy stream bank, obviously popular with cattle judging by the number of cow patties.

At Kawakawa Hut we met three young hunters packing up the choice bits of a stag they’d shot. After a quick snack break at the hut, we were back on the track again. The valley narrowed and soon we were splashing and clambering our way through a bouldery streambed, with our concentration tested by fallen trees and a couple of misleading orange triangle markers. Finally the track headed straight up a steep spur southeast of Kawakawa 545 (full body climbing type stuff), then climbed and sidled for a bit before reaching the saddle for a much needed lunch.

After dropping back down to the stream the rest of the day was easy walking. We stopped for a break at Mangatoetoe Hut, which unfortunately had a barrel full of rubbish, and more scattered around. 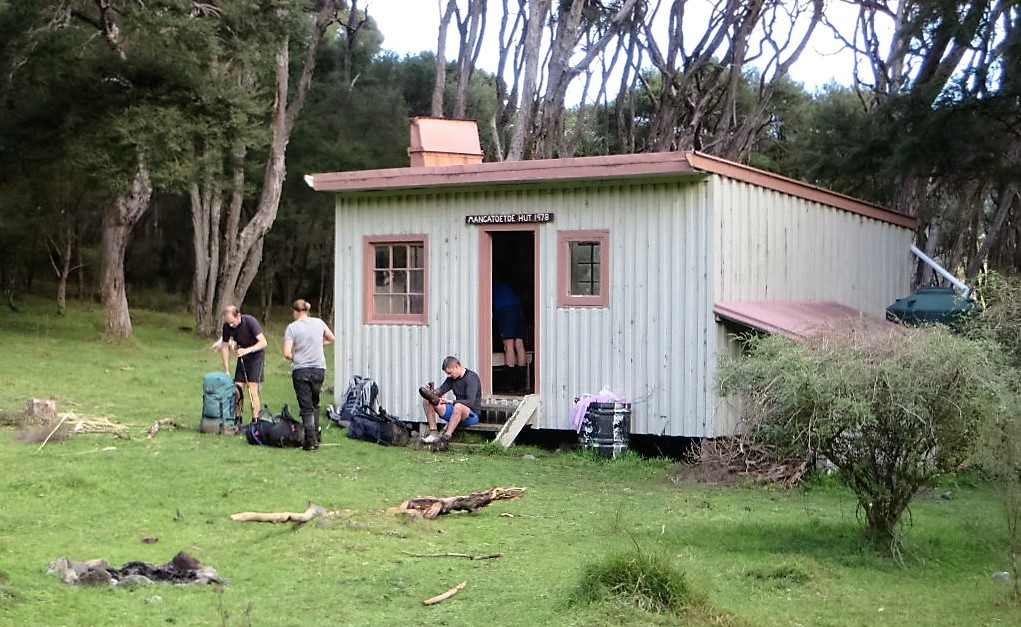 Shortly after we came upon a disturbing sight: a dog lying in a pool of blood in the middle of the track. It looked like a working dog, killed recently, with a gun. A well-placed shot – apparently intentional. But who would leave it in the middle of the track? Strange, and a bit eerie. And just a few minutes later, we came upon a dead sheep. This one, though, had been around for a while and begun its gentle descent into the earth.

The remainder of the walk was mainly along the braided riverbed, with a few shallow water crossings required. Easy to make good time walking. The valley is indeed wide and dramatic. The vegetation changed and the effect of old clearance and farm use became more apparent as we neared the coast. Finally – the car park and our van came in sight – and the cold wind bit our cheeks – the anticipated southerly at last! We were headed homeward by around 4pm…enough light to relish the sight of the spectacular Palliser Bay coastline out the left hand window. 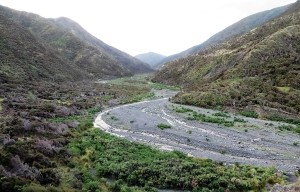