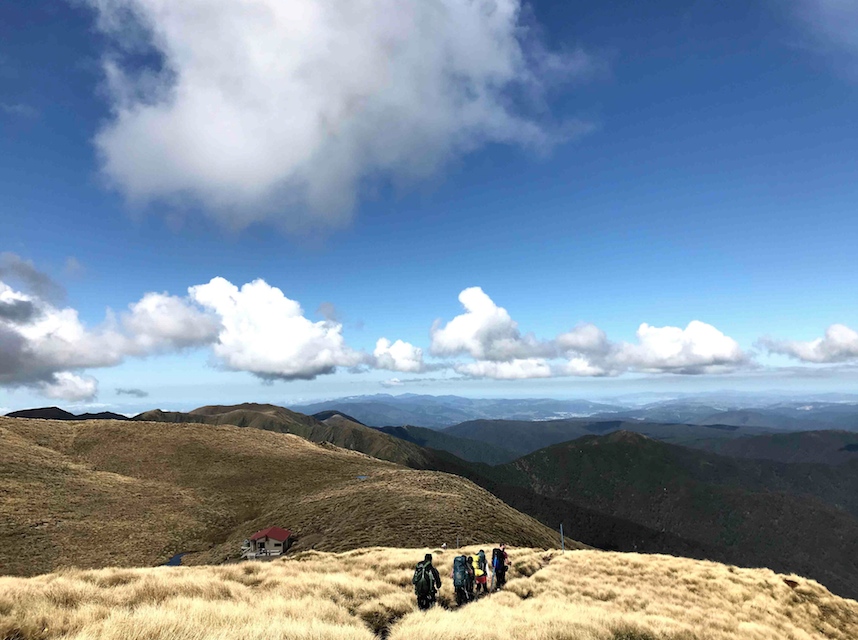 This one had been on the to-do list for a while, and after chatting with my workmate and fellow WTMC member Sumudu, we decided to co-lead a trip together over the Tararua Southern Crossing. After chatting to the chief guide, the trip was added to the Sep 17 – Feb 18 Trip Schedule and we had 8 keen trampers sign up.

Our group of ten trampers departed the Wellington Train Station in the club van just before 5:30pm on Friday with a dinner stop at Paraparaumu’s fast food mile, and arrived at the Otaki Forks road end about 8pm.

It was a beautiful Friday evening without a cloud in the sky and off we strolled up Judd Ridge in the twilight towards our Friday Night objective of Field Hut. About an hour into the climb we came upon a lone tramper heading down, who warned us that Field Hut was full and suggested we would be wise to look for somewhere to camp lower down. After stopping to patch an early blister, we decided to push on to the hut to assess for ourselves, while mentally preparing for a sardine-tin style sleep.

Head torches came on once the bush became too dense for the half moon to light the way and before too long we heard the Morepork I had been listening for.

We arrived at Field Hut around 10:30pm and found there were 6 spare beds amongst the sleeping trampers, and plenty of floor space. As it was such a beautiful evening, a small group ditched their packs and headed up the ridge for some stargazing while two keen trampers decided to sleep alfresco on the deck.

Saturday morning we awoke to a bustling hut, with different groups getting ready to head off on their respective tramps and a well behaved dog waiting patiently outside for his breakfast. It was a stunning clear morning with no wind, and we were all excited to get up on the tops to check out the views. We departed Field hut just before 8am and it wasn’t long before we were all soaking in the views and sun. It was a leisurely stroll over Table Top, with the serenity briefly punctured by a doc worker weedwacking the track. We made our way up to Bridge Peak with a stop or two to take in the amazing views of Kapiti Island, Wellington and the Kaikouras, then down to Kime Hut for brunch and a spot of sunbathing.

After soaking in the sun at Kime we headed up Mt Hector, the highest point of the trip. After catching our breath we paid our respects at the memorial to the Trampers that didn’t make the journey home from the Second World War.

They shall grow not old, as we that are left grow old:
Age shall not weary them, nor the years condemn.
At the going down of the sun and in the morning,
We will remember them.

From Hector we crossed the Beehives and followed the ridge along, enjoying the view and the sun. Even though sunscreen was applied, the spots that were missed started coming up pink. At our final snack break, Henry shared some Party mix and a few inspiring verses from a classic Tararua tramping song that were fitting for the occasion (song attached at the end of report).

We dropped down off the tops and arrived at Alpha Hut just before 4pm (Sat 28), feeling a little weary. We quickly settled into lounging around the hut while the sous-chefs, under the militant supervision of head chef Aimee, created an amazing vegetarian Shepard’s Pie for dinner. It was a top notch meal and just what the doctor ordered after a long days tramping.

Early to bed was in order, with another group of trampers sneaking into the hut overnight.

In the morning (Sun 29) the other group of trampers mentioned their slog from Kaitoke up the Marchant Ridge to Alpha Hut had taken them 14 hours, so we didn’t dilly dally too much and headed off just after 8am.

A couple of Tararua Crossing runners zoomed past us by Hells Gate, as we got stuck into the long walk through the enchanted forest along the Marchant Ridge. We took a few breaks, and didn’t break any land speed records on our way out. The weather was great once again, and we got our last taste of the great views while lounging around on Marchant Peak.

We arrived at the Kaitoke Road end about 5:40pm, some with a few more aches than they started with, timing it perfectly with our van pick up.

I couldn’t have asked for better weather to do the Southern Crossing, or a better group of people to do it with. Happily ticking this one off the bucket list.

A big shout out to Marty who drove the Club van, and picked us up from the Kaitoke Roadend. Thanks Mate. Without your help, it would have been a logistical nightmare!

Away! Away! With billy and pack, lolloping down the mountain track.

If you go down to Lambton Quay

On a Friday night then you will see

Through rain and snow the trampers go

To the Tararua Ranges

As up the Marchant Ridge they crawl

And all they’ll see is nothing at all

In the Tararua Ranges

The leader he is old and grey

He’s reached that age by staying away

From the Tararua Ranges

If you crave a new terrain

The Ruahines are your aim

But you will find they’re much the same

As the Tararua Ranges

Sumudu and Ross led us across

The Tararuas peaks and troughs

No wind nor rain it wasn’t the same

As the Tararua Ranges

And find your life a misery

Then you should come away with me

To the Tararua Ranges

Check out these time lapses of the group’s progress across the Beehives and up Mount Hector (from Sean Gillespie):