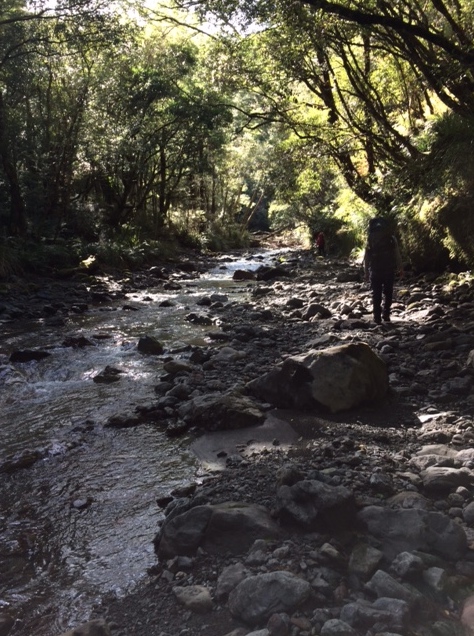 Reading about Maarten’s achievements in visiting all huts in the Ruahines, and in particular his recommendation of Makaretu Hut as a hut to visit, prompted me to finish the report for a trip to the hut we did back in August.

While the natural home for the WTMC may be the Tararuas, I grew up in the Rangitikei looking out towards Wharite Peak and the Ruahines are my preferred lower North Island tramping destination. So, even though it is a bit of drive I’m always keen to head north of the Manawatu gorge for the weekend.

The original plan for this trip was to go in and out to Makaretu hut via the Apiti track, but after a suggestion from Aimee, and some consultation with the Ruahines guru (Maarten), the plan was changed to do a loop from Moorcock Saddle that would provide a variety of terrain over the two days – and the chance to visit four huts in one weekend.

The trip on Friday (with the usual stop in Carterton for dinner) was uneventful and we were got to ANZAC Park just out of Norsewood in good time.

After a fine but chilly night Saturday dawned to a beautiful day and arriving at Moorcock Saddle it was clear that plenty of other people were taking advantage of a fine weekend as the carpark was full.

As is often the case in these situations, there was plenty of speculation about how full the hut would be, but my guess was that we would be ok as a lot of people would likely be heading out for a day trip or just up to a closer hut like Longview.

We set off on the only major climb of the day up to Longview hut (hut #1). As nearly everyone on the trip had been involved in the bushcraft course a couple of weeks earlier, there were regular stops along the way to take bearings and practice navigation and the first of many conversations between Aimee and Kevin over the weekend about the ‘correct’ way to take a bearing.

The climb to Longview took just under two hours, and after a short break at the hut we headed south west along the ridge enjoying the views out over Hawkes Bay on one side, and on the other side up to the Ngamoko range where there was a scattering of snow.

We arrived at the junction of the track down to Makaretu just under four hours after leaving Longviiew and after enjoying a final break in the afternoon sun we started on the descent down to Makaretu hut (hut #2), which took about another hour and 20 minutes. The track was in pretty good condition with just a few steep and muddy bits to deal with.

Just before reaching the hut there is a side stream that could be tricky to cross after heavy rain. However, there is apparently an alternative old un-used track up to ridge behind hut that avoids the stream crossings.

My guess that there would be plenty of room in the hut proved to be correct, as we had it to ourselves that night. In fact, according to the hut book the last people to visit the hut was another WTMC group – led by Maarten of course – six weeks earlier.

Makaretu is an 8 bunk hut, but you could probably squeeze in an additional 3 or 4 people on the floor, and there is also room for tents in the clearing in front of the hut.

After an ever reliable meal from the club recipe book, it was a relatively early night after an enjoyable day.

The next morning we awoke to another sunny day with no wind.

We spent most of Sunday travelling along the Makaretu River. It was nice easy river travel, as the while the river does narrow in a few places it never gorges, and the river levels weren’t high as there hadn’t been much rain in the two weeks leading up to the trip.

It took us just under 1 1/2 hours to get to the junction of the north and south branches of the river, where we took the short detour (one hour return), to visit Happy Daze hut (hut #3).

Returning back to the junction we headed up the north branch of the Makaretu, taking one hour 45 minutes to get Awatere hut (hut #3) where we had lunch. After lunch set off on the only climb of the day, about 200m back up to Moorcock Saddle. While it does get a little bit steep in places there were good views back over our route up the river.

Arriving at Moorcock Saddle early afternoon, we set off on an uneventful trip back to Wellington.

As Maarten noted in his article there are plenty of options for getting there, and this loop was a good EM/M option that provided a good mixture of open tops and river travel – and 4 huts in one weekend.