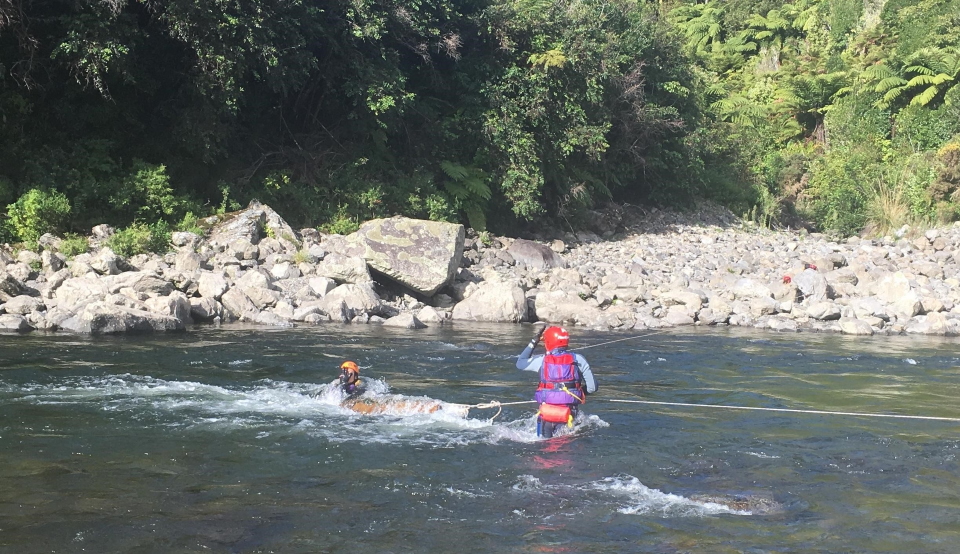 Water is one of the biggest tramping hazards in New Zealand. Too many anxious moments in moving water have given me an appreciation of how treacherous moving water really is. Seemingly little mistakes can have big consequences and there is no opportunity to back off or change your mind when you are caught in the water’s flow.

It was a no-brainer for me to gather skills and experience through group training in a (relatively) safe environment. Training doesn’t remove the hazards, but you understand them more clearly and also learn a bunch of ways to make better decisions and to manage the risks when ‘getting wet’. And I had insider information Nigel, our guide for the day, ‘knew his stuff’ and this would not be any ‘book learning’ theory activity, but the best type of training: ‘learning by doing’. O

But I found the first intro evening really alarming. Nigel took us through a bunch of the theory stuff which was fine. A nice ice breaker before he dunks us in it. The problem was my attitude. I was seeing the theory and mentally doing the ‘yeah, yeah I know all this’ in my head. It slowly dawned on me I could have a BIG complacency problem. Was I now like the 20yo male in a too powerful car but with little self-awareness and no real world experience of the true forces involved? Damn, this is good and I’m still sitting on a sofa!

Water day. Flow was low and the training part of the river could be crossed using the right techniques – in a group or solo (as we later did – although to practice self-recovery, not to practice river crossings). I was still unable to touch in the river’s middle and with flow at the higher end of walking speed pace it wasn’t to everyone’s comfort level for crossing. It brought back memories of several crossings in groups that got swept away, with people and gear spread like flotsam across both banks, followed by cases of near hypothermia. If only I’d known then what I know now.

On the course we had PFDs (like a life jacket) to help us float. Nigel eased the group in to the water activities – defensive swims starting from shallower low force water, then moving out in to faster flow. Then to river crossing and finally catching an Eddy, both with using aggressive and defensive swimming trying to time its use to best effect. It wasn’t fun, but it was critical to practise in a safe place if you are going to be in rivers where you might go for an unplanned swim. It’s also brilliant practice for anyone doing crossings of rivers with moderate flows.

Next Nigel and AJ set up a strainer so we could try being caught in the ‘walking pace flow’ and practise strainer escape (which is basically to get up on top as much as possible even aiming to do so before you hit it). I was reluctant to try the strainer activity not wanting to get injured, but Nigel was stationed right next to it ready to ‘fix-it’ for anyone who got trapped. On my last run at the strainer I faffed about in the current lining up and forgot to lift on to it. Even at walking pace flow, when wedged on the strainer it’s not possible to move on to it. In about 10 seconds I gave up and signalled to Nigel who set me free. I had failed to self-rescue, but I had gained a great idea of what that would mean to be stuck in relatively low flow against a stationary strainer!

At the end of the day, back on dry land, we had a short group de-brief. All done with snacks and hot drinks to help us re-warm before heading off on the drive home. Thanks to Nigel for sharing his experience with us, Megan for organising and all the other punters for being willing to give it a go.

Note: The MSC report for the year 2017-2018 covers outdoor fatalities. It recorded the second highest number of fatalities from drowning (12 deaths during that year), after falling (31 deaths) and followed by hypothermia (6 deaths).