First the winds of change blew through WTMC! Initiation rites that used to be undertaken to achieve membership were abandoned. Initiation rites like having to survive two overnight trips with the club, being seen in a holey ice breaker jumper, proving you can pronounce “Tararua” and know what scroggin is, bribing a trip leader or two plus either the President, Secretary, Treasurer or someone who can forge their signatures to verify your character. All these requirements have gone. Any riffraff can rock up, pay their membership, fill out a form and join. People without tramping experience and character might sign up for Snowcraft. They might not be familiar with the intricate workings of the club as set out in the detailed club policies and procedures manual!

Second the unthinkable happened. The first weekend of Snowcraft was cancelled because all the mountain access roads were closed by snow. With a group of 21 we could not find a free weekend to reschedule to. Snowcraft was down to a single weekend. Snowcraft is always two weekends to allow plenty of time to teach all the crucial snow walking stuff and still have a chance to summit something. What would Rhinehold do? I opened the door to my wardrobe and plucked him out from under a jumble of snowstakes and shoes. Just eyeballing him provided the reassurance and feel good slogans I was seeking. Keep calm and carry on. Cast aside all assumptions and judgements. Be yourself. Just do it. Storm in a teacup.

It was clear from our introductory session that all 16 course participants were cast in a similar mould to my beloved and highly reliable walking ice axe Rhinehold. By this I mean low maintenance, organised, practical, patient, good listeners, smart, confident and capable of taking the initiative. They also seemed enthusiastic. Three of them – Dan, Graeme and Pavlo were even prepared to step into the role of van driver. If this is the type of riffraff the club is attracting now it has abandoned its membership initiation rituals then viva la vida riffraff! 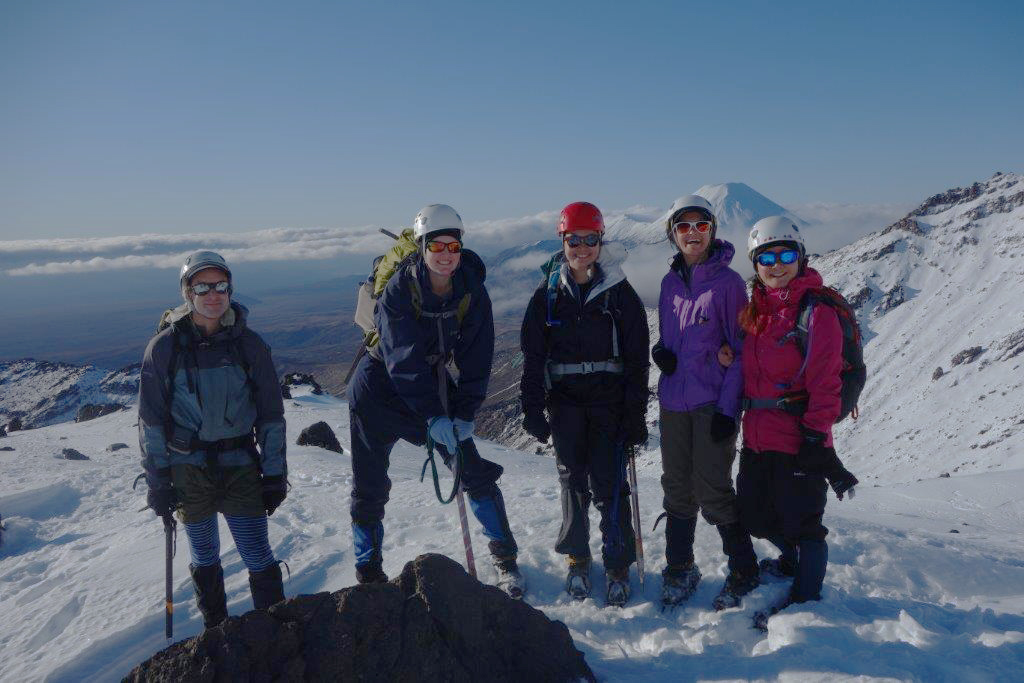 When we finally hit the mountain the weekend of 24-26 June we were down to 15 participants as one person reluctantly withdrew due to illness. Team names had been selected on the drive to the mountain. We had two teams “Lords of the Snow” and something to do with Ben and Jerry. With great tact and consistent with my supportive, non-judgemental nature I expressed my hope that the riffraff were not as lame as their team names. I need not have worried. The only lame person was me.

Having instructed everyone to be careful when exiting the vans as it is easy to slip over on ice I exited a van and slipped over on ice. Nobody else followed my example and we were soon at the Lodge settling into our allocated bunks. Snaxie, our First Aid Monitor did suggest I ice my backside. This was probably a good idea but I decided it had seen sufficient ice already and I should tough it out. Marie our Lodge Leader for the weekend gave a quick safety briefing then we all went to bed.

A few of us got up early to cook breakfast. Assigning a vegan to cook sausages and bacon is an interesting approach. My riffraff were unflappable in the face of this curve ball. Everyone was fed and watered in a timely manner. There were no burnt sausages, no burnt porridge and no burnt toast. The eggs were not burnt either. Nobody broke any kitchen equipment. Nobody lost anything. The day got off to a great start.

Adding to the good vibes the weather was fantastic. Fine with little wind, perfect for outdoor instruction outdoors so we ventured outside leaving the AIC group with the run of the Lodge. Everyone recalled the access code for getting back in. Everyone was ready to go ahead of time. I was impressed but did not say so. Perhaps I was hallucinating. My backside was hurting.

We split into groups and spent the next few hours practicing walking without crampons in different terrain and up and down slopes of different aspects and elevations so the riffraff could master the various walking techniques that make a day’s slog in and alpine environment a bit easier than it might otherwise be.  Self-arrest practice followed with everyone quickly getting the hang of the various techniques and a good grasp of the basic principles such as “don’t fall over”. Crampons were introduced into the mix increasing the tripping hazard and decreasing the coolness factor by several notches as we broke the news to everyone that they needed to perfect the John Wayne walk. When we paused for an early lunch Paul had a bad headache. His condition worsened after lunch and I escorted him back to the Lodge to rest while the rest of the group moved up the mountain to find a new slope for practicing the dark art of how to recover if you do fall over.

Later the battered and bruised regrouped for a session on alpine shelters. Tent platforms were built with minimal equipment and minimal fuss. Snow caves were attempted also. Alan ran a brief session on snowpack analysis then it was time for more walking. One group headed up with Alan and Snaxie to execute a slightly longer walk while DJ and I took the remaining punters on a shorter more photo focused loop back to the Lodge.

Back at the Lodge it was time to admire the great sunset and cook dinner. The dinner was ready on time. More change to cope with! The dinner was totally edible. 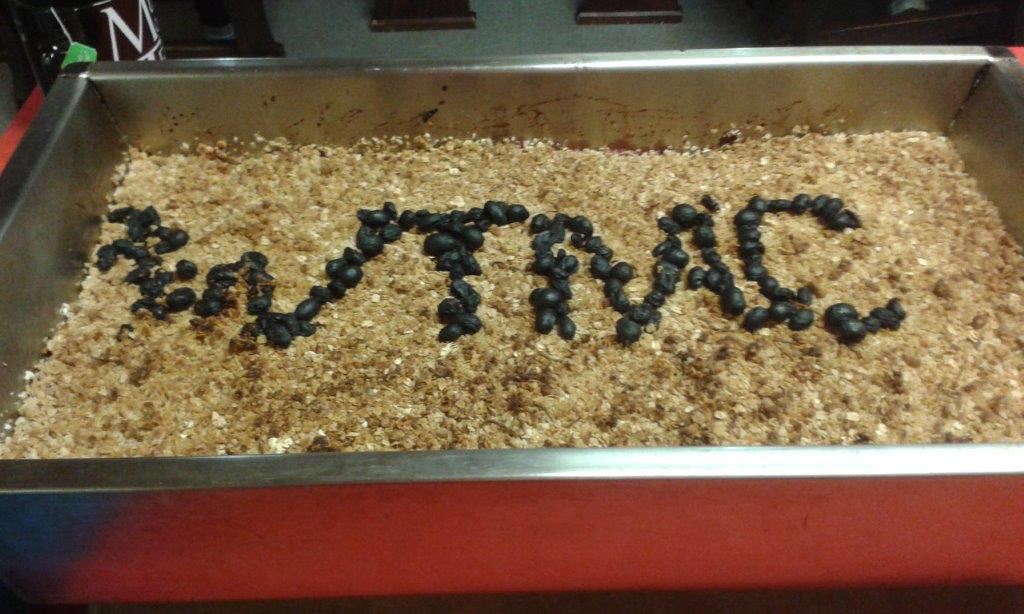 The dessert even had WTMC spelt out on it with lamb droppings. I was very impressed but did not say so. My backside was hurting. After dinner Lydia Bradey, one of New Zealand’s most talented climbers, spent time with us doing a question and answer session. This was fascinating and inspiring and I was proud of the quality of the riffraff’s questions but did not say so. Despite sitting on soft cushions my backside was hurting.

The forecast for Sunday was not looking great but everyone arrived at breakfast ready to go and as keen as ever. Visibility was minimal and it was raining lightly. There was a bit of wind. We decided to run a trip planning and navigation exercise. The group was divided into three with everyone having to plan an hour’s excursion from the Lodge. Once each group was ready they headed out with an instructor in tow to see how their plan stacked up in the real world. As there were four instructors and three groups I elected to stay in the warm, dry Lodge and make scones. This was out of character for me but by now I was totally down with the whole change theme and my backside was hurting.

If you do enough alpine you learn how to bake eventually. I managed to make both plain and cheese scones. The riffraff managed to eat most of them. Nobody got sick. This was a relief but I did not say so. Let them think I always cook scones! After the tea break and some discussion in the groups everyone reported back to the wider group on lessons learned. This was the most interesting part of the weekend and it was pleasing to see that everyone was starting to apply their new skills. I believe I actually shared this single positive observation with the group.

Happy that we had imparted the basics of Snowcraft to the riffraff in a single weekend we packed up and headed back to Wellington. Big thanks to my fellow instructors without whom the course would have been quite different. Snaxie, David Jewell and Allan Higgins worked tirelessly to make the weekend practical and informative and to show that not all alpinists share my outlook on life. They did the crampon fitting prior to the mountain weekend with help from Debbie Buck and Marie Henderson. Big thanks also to the riffraff for ensuring that the weekend poured as smoothly as a cold lager. Thanks also to Marie Smith for kindly agreeing to come up and be Lodge Leader for the weekend.