We left the railway station at 8:30am on Saturday morning and drove to the Waiohine Gorge Roadend. We hit the track at about 10:45am by crossing the highest swing bridge in the Tararuas and took the left track that would take us through to Cone Hut. From there it was bit of incline over a muddy track to a height just below 700 metres. It was a really warm morning so the extra layers were quickly taken off but not quite hot enough to justify carrying 5 litres of water like what happened on the Iron Gate Tramp! Debbie, Clare and I were feeling enthusiastic and energetic so went on ahead a bit then waited for the others. Craig then kept us entertained with some tramping stories of people getting “geographically embarrassed” and the infamous Neil 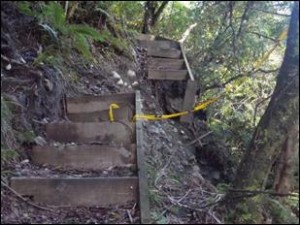 l Forks -Winchcombe tramp. We realized by then that perhaps we should have asked for a reference before signing up for this tramp, although we were assured that all the punters had gotten back safely.

We stopped at Cone Hut for lunch and a brew. Even though I had done the Holdsworth-Kaitoke Tramp a couple of times I had never seen the name on the long drop before which was very appropriately named “Punga House of Pohy” complete with an air vent at the side.

After quite a long lunch break at Cone Hut we meandered down the final bit of track to Tutuwai, stopping to take photos and check out all the junctions where Bull Mound & Omega tracks led up to Marchant Ridge and Hells Gate – good ways to descend after a Southern Crossing rather than following along Marchant Ridge (do I hear sighs and complaints just at the mention of Marchant Ridge?).

When we got to the flats just in front of Tutuwai hut a few people were camping out in tents on the grass next to the river. The new DoC track up to the hut had been washed out so we did a little bypass around it.

We cooked a really nice dinner of Creme Fraiche, pasta and sausages and had skinny custard sauce for dessert. Unfortunately Craig had not re 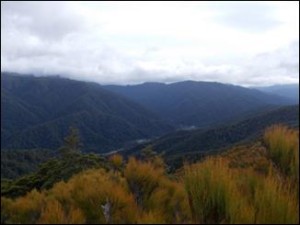 ad the WMTC recipe book with Aunty Rata’s advice on custard making: Aunty Rata recommends that you try making it at home before cooking it in the hills. The phrase “turn to custard” is in fact a reference to what happens if your custard execution is not up to scratch.

Despite this, the custard turned out fine and was delicious. So kudos to Craig for that!!

There were a few other trampers and hunters staying at the hut that night so we had a chat with them. Two of them were into mountain races and mentioned the Mukamuka Munter so I blame them entirely for giving me the absolutely insane idea to go run it this year on limited training, instead of the Pelorus half marathon I was going to run that weekend just for a fun training run. Although I think I put the idea of the Queen Charlotte Ultra marathon in their minds so it’s all fair game I guess.

From the hut it was straight up to Mt Reeves which provided a good way to get warm on a cold winter’s morning. The highest point at 899 metres provided spectacular views of Tauherenikau Valley and March 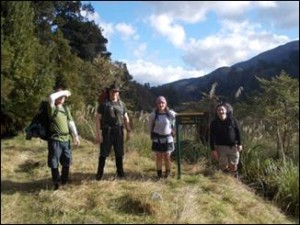 We took the ‘unofficial’ Coal Stream track down which was actually very well marked. Points had to be awarded for creativity in the tracker markers. The markers were mostly yellow triangles but some were made of venetian blinds and others of snow foam! There was also some of the really ‘old school’ circular DoC track markers.

As we continued making our way down the Coal Stream track we could actually see our van in the car park (so close but oh so far away) through a gap in the trees. This created a discussion over the quickest way down – sliding down on ground sheets and snow foam. We decided to continue tramping down so we would all end up at the van in one piece rather than in several. 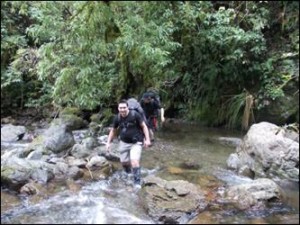 sing (no photos of anyone getting wet sadly).

We got to the van at about 1pm just as the rain started so that was very well timed.

Thanks to the our superb leader, Craig, for not only leading the trip with so much enthusiasm and doing the driving but also keeping us entertained with his many stories of tramping (moon-light southern crossings) and his biking journeys – much better than IT!

Thanks to all the punters who went on the trip for their good company over the weekend.