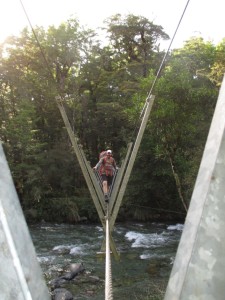 After hunkering down at Homer Hut waiting for a break in the weather we finally got a window of a couple of days and decided to head out to Mistake Creek and over the famed U pass to Hut Creek, with an opportunity to climb up Table Top mountain or Triangle Peak if the weather was good enough. The alarm was set for 7am for an 8am departure. I set my alarm for 6:15 so i’d have time for a relaxing breakfast of porridge and a coffee, somehow I was still the last one ready though! We set off from Eglington carpark just before 9am, with Brendan and Megan setting a fast pace while Tony and I brought up the rear. 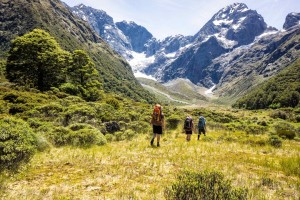 The first few hours were tracked before petering out at some flats. We wandered along the open country until we hit a creek, then followed that towards the valley. Megan led the charge finding a path up the valley through the bush, and I was more than a little excited by my new gaiters and what a different experience it was bush bashing with a bit of protection on my legs rather than bare skin (I could never go back now!). The others were all way more experienced at off track navigation but after a bit of encouragement I gave it a go up front and started to enjoy the experience of finding a way through the dense bush, looking for the path of least resistance. 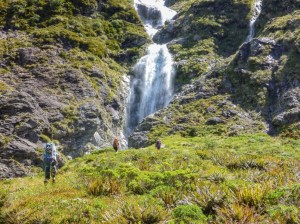 Eventually we emerged from the bush and came to a waterfall. According to the guide book there was an ‘improbable staircase’ we could climb on the true left of the river, and after a bit of scouting we found what looked like a way up. Grabbing hunks of ‘snow grasp’ to help us we scrambled up, I managed to slip a couple of feet at one point and break my watch strap, gutted! We sidled back towards the waterfall and then over some big boulders into an amazing basin with a stunning view of the cirque, u-pass, and Triangle mountain. We couldn’t see Table Top but could see the way up there, following the crack that ran up the slope opposite to U-pass. It looked like a sweet spot to camp and would mean we didn’t need to go up over and down u-pass and then back again if we decided to try climb Triangle the next day. The weather was supposed to turn however so we decided to move on to somewhere more sheltered and try for Table Top the next day from the flats. 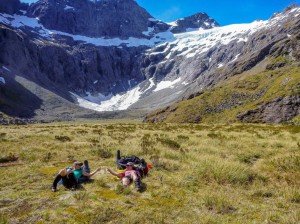 Brendan found a tarn for his daily swim, and after a bit of a rest and admiring the view we started up the U-pass. Brendan bolted up and was waiting at the top with some jelly joiners to ease the pain the mere mortals feel when climbing up so steep a pass. The U-pass itself was incredible and like nothing I’d seen before, a giant ‘U’ between the mountains with smooth steep sides on either side. We started down the other side, and at one point I managed to slip sideways on a rock and fall in slow motion until somehow I managed to end up lying awkwardly hanging off a boulder with head-first down the river bed! Like a turtle I couldn’t get up and Tony tried to fire off a quick photo of my embarrassing predicament, but luckily Megan rescued me in time by helping get my pack off so I could get upright. 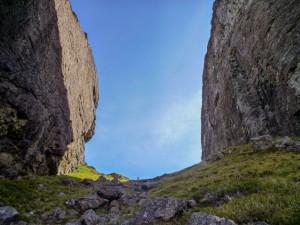 We made it down to the upper flats and found a campsite on the bushline but with no easy source of water close by. It was getting pretty late by this stage so when Tony found a trickle of water about 10 minutes away we decided it would do for the night and set up camp. On cue the sandflies started to attack and we had to try and cover up any bit of skin they might munch on. By 9:30 we were eating our dehydrated meals, and into our tents just as the rain started. We made the call not to attempt Table Top the next morning and have a mini sleep in, because of the bad weather that was supposed to come in and the lack of any easy route we could spot to get up there. 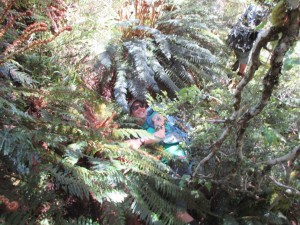 We were up at 7:30 am for what was supposed to be a short 3 hour tramp out. After a short walk to the lower flats we found a sweet camping spot and a great place to get up Table Top about 20 minutes from where we had camped the night before. Live and learn – we decided we would have to come back and attempt the climb from there next time. We followed the creek and although we saw a track marker heading into the bush at one point, we decided it was easier travel along the creek and would follow that for awhile before picking up the marked track later. After awhile the creek started running faster and the land started dropping away, so we consulted the guidebook which gave confusing instructions and seemed in opposition to what was shown on our map. We decided to go back and try and pick up the track but couldn’t find it, so went into the bush anyway and had some tough travel for the next couple of hours navigating through the thick bush. 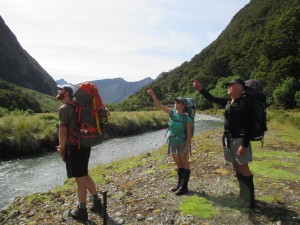 After many discussions over interpretation of the map and guidebook we decided to drop back down into the river and cross over to the other side as both the map and the guidebook agreed the track was on the true left of the river further down. We linked up to cross and continued the tough bush travel, constantly scanning around desperately for a marker to make the travel easier. We got to a spot where it seemed logical there would have to be a marker somewhere, and Tony, Brendan and Megan all raced off to try and find the track. I ‘guarded the bags’ (important job, who knows who could be out there) and settled down with some snacks. Megan found the track first, following a blue track line to find the sought after orange marker. From there it was an easy walk out along the track, followed by a swim at the wire bridge before getting back to the car by 4:30. A very long day for what was supposed to be a cruisy couple of hours! It was a good reccy trip though and we agreed that now that we know the best spots to camp and where to get up we would be back to climb Table Top and Triangle…they won’t get the best of us twice so watch this space!