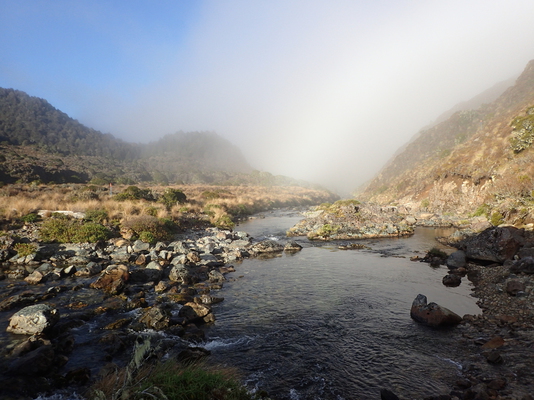 We had the usual Friday Station departure in a rented van along with Andrei, Matt and Fons who were doing a Medium-Fit trip in the same area. Although Wellington was experiencing unusually hot weather, the forecast for the area we were heading to was a little dodgy; possible thunderstorms and localised heavy rain. Will we get wet camping tonight? It was my third trip with the club but my first involving a night in a tent or fly. My first night in a tent in over 20 years. We had a smooth drive north, with good kebab for dinner in Bulls, and lightening brightening the night sky enroute. We arrived at the Waikoko campsite in light rain at around 10:20pm. While Richard and Andrei sussed out tent sites, I assessed the floor of the van for size. Yup, that’s a decision; I will test my mat out on the floor of the van (and stay dry!) The site was pretty full of tourists in camper vans.

Although the night provided some very heavy rain, Saturday dawned dry. Richard and I dropped Andrei, Fons and Matt off at the start of the Urchin track at 8am then did a tiki-tour to suss out the other campsites. The Urchin campsite is a much better tenting option for larger groups.

We were on the Umukarikari track by 9:00am. The DOC sign told us it would take 6-8 hours to reach the hut. The path is well-marked, just follow the orange triangles through the beech and ferns. There’s a little bit of uphill work to start, with some big steps up, and down, and a slippery felled tree to negotiate around, a challenge that resulted in me adding a little mud to my load! With Richard’s enthusiasm for map reading and navigation, we had a few short stops throughout the day to check out on the map where we might be and then to double check our conclusions with the GPS; very handy. It was a good chance for me to refresh and apply the compass and navigation skills Kevin Cole had taught me – thanks Richard and Kevin.

We were out of the bush by about 10:45. The track across the tops is marked by poles and the path is mostly small rocks. I imagine it could be very cold if the wind was up, and visibility could get pretty terrible; it’s quite exposed. We had a few moments of thinking “do I need another layer?” as the light wind we were walking in did become cold from time to time, but a turn of a corner provided protection or a break in the cloud provided sun warmth, so the question wasn’t acted upon until the rain started. With the rain (light, not cold) we lost some visibility and it got to the point where we could only see one marker ahead.

The hunters we met later at the Waipakihi hut had made the journey earlier in the day and reported even less visibility.

There are a couple of quite steep bits on this part of the track when heading toward the summit of Umukarikari at 1591m but it is otherwise gently undulating.

We stopped for lunch around 1:20 before heading down into the bush again to the Waipakihi hut. By then we were only being dripped on. The descent to the hut was steep in a couple of places and there’s a small river crossing just before the hut, but only ankle deep at this time of year. The river has some deep pools, so a great spot for cooling off in hot weather.

Waipakihi is a 12 bed hut. We were greeted by 4 hunters who’d been helicoptered in for a week’s holiday, and 3 hunters who’d walked in earlier in the day. Just enough beds left for our party of 5, assuming Andrei, Fons and Matt get to the hut – they had an ambitious day ahead and may decide to tent overnight. Unfortunately the lack of visibility foiled their plans and they arrived about 3/4 hour after us, shortly followed by a couple who walked in from the Kaweka side, who despite living in Rotorua, are also members of WTMC! Thanks to a good supply of tents, and clearing skies, beds were not a problem.

Richard and I enjoyed chorizo couscous for dinner. The recipe definitely needs more water; perhaps 1.5 cups of water to each cup of couscous. With the soy and added chilli flakes we enjoyed a tasty meal.

Sunday dawned misty but clearing. By the time we left the hut at 7.15am we could see the tops that yesterday we had tramped in shrouded rain. The 45 minute climb through the bush was steep at times but we were rewarded with stunning views across the tops; Lake Taupo, Lake Rotoaira, Ngauruhoe and later Ruapehu.

As we had plenty of time, we enjoyed a luxurious brew for morning tea, at which point the MF group caught up to us.

So we headed off together, slightly faster pace than the previous day, but then it was mostly downhill, albeit a little steep at times. We descended back into the bush about 11am, just as it was starting to get quite hot on the exposed tops. The climb down was slippery in parts due to the previous day’s rain, lots of leaves and tree roots. We arrived back to the van together at 12:05, exactly as Richard’s GPS had predicted, and just short of 5 hours since leaving the hut!

Lunch was enjoyed back at Friday night’s campsite shelter, with afternoon tea in Brown Sugar Cafe, Taihape, on route to Wellington, arriving 5:30pm. It was great to have got the promised views on our return walk, and in retrospect, it was good weather as it would be very hot on the exposed tops on a cloudless day, and very cold if it was windy.

Umukarikari track: An umu is an earth oven. Karikari means to dig repeatedly. So I’m thinking Umukarikari must mean there is good earth to dig and build an oven with. Anyone know any better translations?
Kaimanawa Forest Park. Kaimanawa means breath for food https://nzhistory.govt.nz/culture/maori-language-week/1000-maori-place-names#k
Waipakihi Hut. Wai = water. Pakihi = to be dried up. I guess the river gets a bit low sometimes!