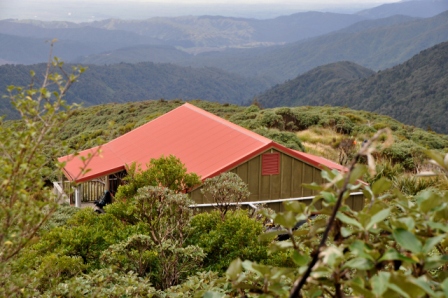 Our tramp got underway at around 10:15am from Poads Road, with a 15 minute slog through a muddy field, then a steep uphill for about three quarters of an hour. After that, we followed a rolling ridge along a fairly good track, with some tricky patches of the famous Tararua sludge/mud (which Clinton simply plowed right through), finally arriving about 5 1/2 hours (from the start) later at Waiopehu Hut.

Our hopes of a legendary sunset were dashed by low cloud, however those same low clouds did give us a special sunrise the next morning (at around 7:30am). Dinner was good, the night was cold.

The next day we ascended up nearby Waiopehu summit (about half an hour), then mastered its Twin Peak (another half an hour). From there we traversed a saddle and conquered Richards Knob, encountering another WTMC tramping club group coming from Te Matawai Hut. We then continued along a seesawing ridge (Gable End Ridge) which ended in a steep descent down to meet the track leading to South and North Ohau (about 3 hours from Richards Knob). Here we came slightly unstuck, not initially noting the path going off to the left. On our way out we followed the ridge with the Ohau river roaring away below us, crossing several tributaries and eventually crossing our muddy field and back to the vans. Total day tramp, about 7 hours.