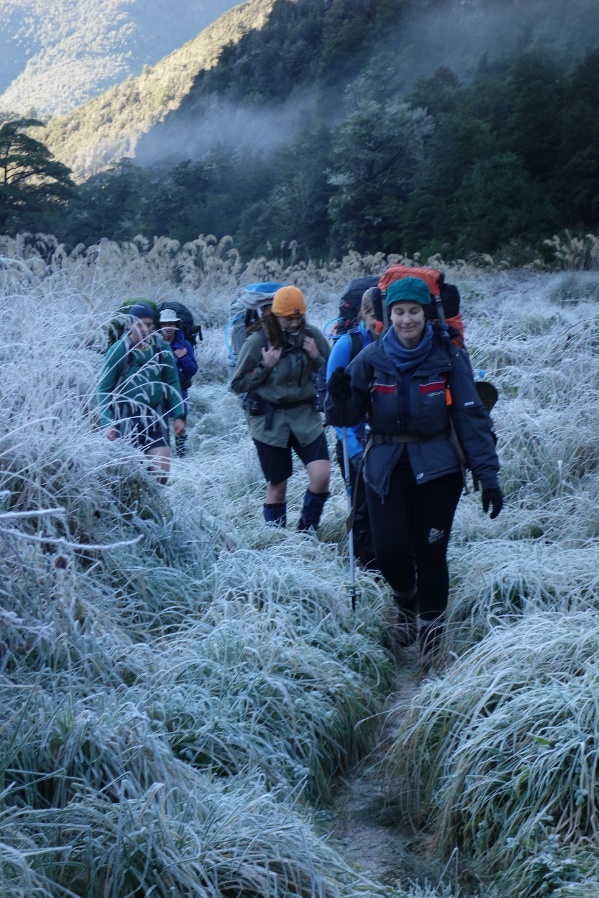 As part of the WTMC mass migration to the South Island that took place on Queens Birthday weekend 2017 (35 from the Club on the ferry), the ‘easy-medium’ group was set to hike to Kiwi Saddle Hut and beyond in the Wangapeka valley region of Kahurangi National Park.
One thing the ferry allows for is plenty of time for the group leaders and wannabes to analyse and review trip plans. Friday night would be at Siberia campsite (well-named, as it turned out). For the easy-mediums, the plan was on Saturday to walk 6-7 hrs up the valley along the Wangapeka track to Stone Hut (10-bunk), and on day 2 scramble up to Mt Luna saddle (and bag Mt Luna should time & weather permit) and then walk the ridge lines to Kiwi Saddle Hut before dropping down to Kings Creek Hut back on the Wangapeka track. Day 3 would see a shorter day back to the campsite. However, the reality is that day 2 was probably asking too much of a large easy-medium group – a 9+ hour day over some challenging terrain. That left the brains trust cogitating over a plan B that fitted the easy-medium envelope.

Arriving at Siberia campsite around midnight with the temperature around zero, the chilly night allowed for plenty of thinking time for trip options. The initial plan B was to go all the way to Stone Hut on day one and then come back down the valley over two days. However, this not only lacked variety, but also lacked … Kiwi Saddle Hut – which was, after all, the trip’s name!
So, it was decided upon a shorter first day just to Kings Creek Hut (a larger hut meaning no squeeze for our 10-strong group), followed by a day-hike (yay – light packs) up the Kiwi Stream valley on day 2 to Kiwi Saddle Hut (yay – our destination!), with the option of going up to the bush line and beyond, and then back to Kings Creek Hut. Day 3 would be another short day – the return tramp to Siberia. After breakfasting in sub-zero conditions at Siberia campsite (plenty of space, but a bit slippery for the vans!), the group headed off on the short 4-hour tramp up the Wangapeka to Kings Creek Hut. The track is in good nick, apart from a couple of short traverses over smallish active slips.

Kings Creek Hut was reached in time for a late lunch, which gave plenty of time for a wander around the area and to warm up the hut – it’s a good sizeable hut, 20 bunks in two bunk rooms, so ideal as a 2-night base for the party (but pretty cold when we arrived). About a 10 minute walk away is historic Cecil King Hut – a ‘working museum’ type hut built some time ago by, not surprisingly, Cecil King. There is quite a history to the hut, which features in the book Shelter from the Storm. It’s a worthwhile stop.
Kings Creek Hut is well located close to the Wangapeka River (there are some excellent swimming holes for warmer times). Some of the party managed to spot Whio in the pools near the hut – the search for Whio being a feature of the trip. After getting the fire going at Kings Creek Hut –the group enjoyed the usual hearty WTMC fare for dinner and managed to get a somewhat more comfortable night’s sleep than that experienced at Siberia. We were also quite a studious bunch and there was much serious reading … or was it intensive study for the native bird call game that featured the following evening?

Overnight a thief struck. One of David’s croc shoes was missing, dragged off into the bush by a Weka, we assume. Search parties failed to locate it! Sunday’s tramp was a relatively straight-forward affair – up the track to Kiwi Saddle Hut, and beyond for those with more energy and inclination, and return. The track up to Kiwi Saddle Hut is well graded taking us from 450m to 1030m over about 11.5 km. The standout aspect was the birdsong – the loudest birdsong I can recall while tramping, so loud that when group leader Richard whistled for a stop, it was not heard at the front of the group. The “Whio forever” programme is clearly having an impact and further research reveals that this area was one targeted as part of DoC’s “battle for the birds”. It works folks!
Kiwi Saddle Hut was reached in about 3 ½ hours, so was a good place to stop for lunch, fending off Wekas in the process.
Seven of the group then chose to walk up the ridge to get above the bush-line setting their sights on a tarn at about 1310m (we had about 2 hours available for the return jaunt). However, all we could find was an ex-tarn. It had dried up.

But there were decent views and a sense of place. And there was also … snow! The very first flakes of snow started falling just as we emerged above the bush-line. As other groups tramping in the area found out, this turned into quite a decent overnight dump.
And so with 3 group members having returned to Kings Creek Hut, the remaining 7 made their way down to a warm hut just in time to beat darkness. The day worked out well, with the group covering around 26k over about 8 hours.
The final day saw an uneventful return to Rolling River (the track starting point just up the road from Siberia), punctuated by further Whio sightings. Perhaps the most memorable moment, however, came after our tramp was over, when we were treated to a river crossing demonstration by the Medium group that had looped around Mt Patriarch. Perfectly executed – nothing like a big crowd watching to focus your attention!
Overall, a fine tramp – probably more accurately assessed as an “easy-medium-easy” grade reflecting the effort required on each of the three days. I know that I am keen to return and not only complete the original plan, but also venture a little more widely in this excellent part of the world.