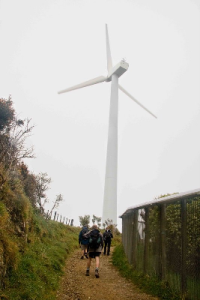 I was originally intending to be at another function for Sunday but this day trip was also on the schedule. The forecast wasn’t sounding so great on the Saturday with some rain likely along with a southerly. Our starting point was at the 4 Square mini market on the corner of Aro & Willis streets.

Under darkening southerly skies & a good chance of some rain, 12 punters set out at 9.30am bound for the Polhill reserve in upper Aro St. 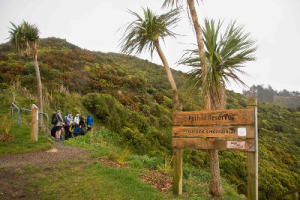 At that point light rain began to fall but eased off further up the hill, although only briefly. It soon returned in varying amounts and times but remained with us for the rest of the trip. A brief stop in an open area gave us cloudy views of the city before continuing on up into the bush. 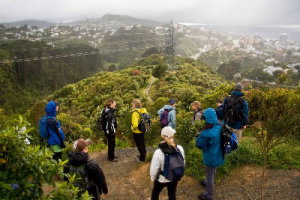 We encountered a few mountain bikers along the way and it was a tight squeeze for both parties getting past each other in places. Further on we came to an intersection and took the alternative left route uphill coming out next to the roadside in Ashton Fitchett Drive before re entering the bush and eventually coming out again at the Karori Wildlife Sanctuary perimeter fence line.

As we made our way uphill the rain returned and increased in intensity while we followed the fence line all the way up past the wind turbine and on towards Wrights Hill. We encountered a few more mountain bikers and other people out for a Sunday run or walk. The only blessing at this point was that we didn’t have a howling southerly blasting us, in fact there wasn’t much wind at all. 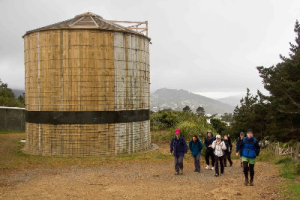 We continued to make our way along to the Wrights Hill Reserve parade ground for a brief lunch break. We tried sheltering from the rain inside the bush but it was just as wet in there as it was outside. We had all of about 10 minutes to consume something for lunch before continuing on down the track to Campbell Street where we had the option of finishing the trip and getting the bus back into town from the Karori shops or returning along part of the wildlife sanctuary perimeter fence line and finishing elsewhere. For 6 of us it was out down Campbell St and the trip ending around 12.45pm after 3 ¼ hours.  While the remaining 6 tough punters walked for an hour more back to Aro Street for a coffee.