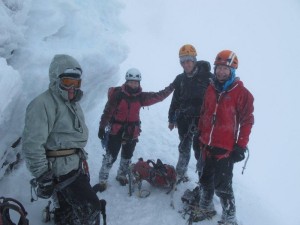 The Walk (Kate’s take on it anyway…)

Despite what you read in the rest of this carefully conceived article, in which we are attempting to combine a multitude of writing styles and varying levels of the truth, this was actually a tramping trip.  Well, ok, it was an alpine trip which means we carried wee packs but with our ice axes and crampons we looked really cool.

So, the plan was to stay in Ohakune at a backpackers (is this where I mention how great the cheap backpackers was?) and head up Tahurangi on Saturday.  Sunday was left open for a delay due to weather or a need for a lie-in after the huge day on Saturday (or perhaps the rugby game Saturday night?).  Tahurangi is the highest peak on Ruapehu so we were feeling pretty intrepid as we headed off Saturday morning.  We left the van in the parking lot at Turoa and bravely headed off into the sunshine walking up under the Turoa lifts.  Well, admittedly there was a fair bit of phaffing prior to heading off while we tried to locate Allen and Sue who were going to meet us up on the mountain someplace – but where?  And why weren’t we on those lifts going up like all of the smart skiers?  Probably only because no one wanted to be the lazy one who suggested it!

The weather was great and the snow was firm so, up we tromped to the upper cafe.  This just happened to be a handy place to pause and wait for Allen and Sue.  It also gave some of our group the chance to look even more cool by donning their climbing harnesses!  The skiers were looking really jealous – hmmm… actually perhaps not… more like aghast that someone would bother to climb when you can get a ride up and fly down so easily.

After this second session of phaffing we again headed up to the spot where the climbers and trampers would split.  The cool climbers (Mike P, Sharron, Marie, Alan and Sue) headed for Girdlestone while David lead us trampers (Harry, Megan, Katy, Kate, Mike T) with snow gear (wanna-be’s!) off to Tahurangi.  The sun was shining and we were optimistically ignoring the dark clouds gathering around the Tahurangi summit.  Is that part of being a wanna-be?

We aimed to stay west of the Skyline Ridge and east of an unnamed ridge.  It would be easy navigation; just head up, go until you get to the highest spot, then turn around.  What could go wrong?  We were making good progress but those clouds we were ignoring were determined to put a damper on our optimism.  We were soon in heavy clag and having a very hard time seeing anything through our very fogged up glasses.  David continued to keep us moving forward and managed to keep us heading up through the clag.  We were having a hard time staying together and staying warm but we were still having fun and weren’t keen to see the adventure come to an end.  At this point we were still having a good laugh at the icicles hanging off our clothes and hair and eyelashes.  Did you know you can get icicles on your eyelashes??  We were definitely feeling like intrepid climbers now!  How cool were we?!

We met up with another group of three who had made the summit and were heading back down.  They hadn’t stuck around up there for long!  I was glad to have some foot steps to follow for a while but in the wind and clag these soon disappeared on me and we were on our own to find our way up once again.  We were then caught up by a pair of strapping young lads who were keen to break trail for us.  We followed them up one steep section and paused to re-group.  David checked the GPS to find we were 150m below the summit, the weather was not allowing us much optimism and a few of us were getting pretty cold so, we made the decision to head back down to the warmth of the cafe.  Surely we could still claim we had made it?  Well we were then passed by the two strapping young lads who had also decided to give up short of the summit.  We were found out, no making big claims now!

The way down was strange.  There was just nothing but white.  White air, white snow.  All we needed to do was head down slope, what could go wrong there?  I thought we would be able to just follow our tracks from the way up but again, they very soon disappeared in all that white and I was left to just go down.  Luckily the snow was soft so, we could step with confidence and made good progress.  Well, until we discovered that we were on the glacier!  How had I gotten us over there?!  I still don’t know!  We soon found that the soft snow was gone and our footing was not quite so confident.  This did however provide an opportunity for Katy to show off her shiny new snowcraft skills with a beautiful self-arrest.  This will be the stuff of legends (or fish stories?) once she gets the chance to tell the story a few more times.  The rest of the descent to the top cafe was pretty uneventful with more white than I knew was possible for one day.

We settled in at the upper cafe to wait for the Girdlestone crew.  We wanted to head down with them thinking that the coolness of their harnesses would surely rub off on us a wee bit.  Unfortunately, the cafe was closing and we were banished from our spot under the heater after about an hour of comfort.  We headed off down the hill to finish our intrepid journey with yet another cafe stop at the bottom.  We were very excited to see the rest of our crew appear out of the clag!

While we didn’t actually make the summit of Tahurangi it was a great day out and for us alpine wanna-be’s and felt like a great adventure!!

After such an arduous day on the mountain the president in her wisdom dragged us all to the pub (‘all’ means everyone except Harry) – the All Blacks were after all playing. The long wait until kick off meant some did not stay the distance retreating to their luxurious and peaceful accommodation. Others used the interim to prove that Google has ruined arguments over a beer. Unfortunately the All Blacks failed, but beer was the winner on the day.

The next day, Sunday dawned sparkling and clear and the mountain looked remarkable. It was decided that we had been there done that however and there were other adventures to be had!

The night before Harry had reminisced about a nearby lake surrounded by unusual fruit trees.  When questioned on “how did he know they were fruit trees??” it was established they were as they had fruit on them, and that they looked like strawberries.  It was decided this had to be checked! As it was late winter and non-fruit season the fruitless search was instigated, but first there was a secret hut to be found…

After several “it’s around the next corner” calls from David, Marie pulled off a perfect park on the side of the Ohakune-Turoa Mountain Rd. Off we set in our spring fashion wear for a short amble to visit Alan and Sue, who were staying at a hut at a top secret location.  This secret hut is reached by a secret track, which is disclosed to only the most elite of mountaineers (it’s a secret). The short amble turned into an arduous ramble through peaty snow-covered tussock and icy streams.  Spring fashions took a turn for the worse, although some seemed to innately know that no WTMC expedition is ever undertaken without gaiters, and were soon transitioning to their winter collection.

We eventually reached the secret hut, and Alan and Sue put the kettle on and gave us the tour. The hut is a blast from the past. Perfectly preserved wooden skis hang from the roof, and the pot belly stove rumbles merrily away in the corner, keeping things toasty. Some bright spark has rigged up a solar panel to power the light, and there is room for eight to sleep in the loft.  After a nice cuppa and a biccie, we headed off back along the secret path, over the tussock, through the swamp, across the river, and turned right at the last tree on the left to reach the van. 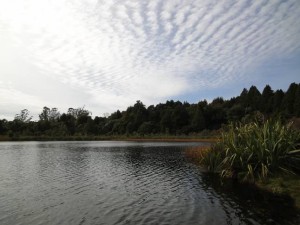 Meanwhile, back in Wellington Ian was having an adventure of another kind…

I had been looking forward to going up Tahurangi for about a month. So was a bit upset when I started feeling off-colour whilst packing my bag the night before departure. I tried to ignore the aching muscles and lack of energy but after a couple of hours at work on Friday I was feeling decidedly less than ideal. I needed help fast.

The obvious choice was a lady at work, who having numerous school-aged kids is forever contracting a spectacular variety of diseases, including her latest contagion of “slapped cheek disease”; something which I had not heard of before and would have thought was only caught by men after drinking too much in the company of women.

Nevermind, this lady was a walking medical dictionary and would know what restorative elixir would get me back to Tahurangi climbing condition. Unfortunately when I went looking for her I was told she had gone home sick. However, not all was lost. Her colleague said she swore by some herbal viral defence tablets, and indeed the colleague herself had taken some after recovering from something that sounded like the plague, but because of the tablets had only needed to take a week’s sick leave.

The recommended dosage was one a day. I wasn’t in the mood for half measures so took three. It tasted like eating raw fish served in a new leather shoe. I spent the rest of the morning imagining the magical herbs laying waste to any nasty virus…

Alas by lunchtime I felt worse. I gave up all hope and emailed Sharron to meet up so I could give her my share of the group food before I took the afternoon off sick. I spent the weekend on the couch, bored out of my skull trying not to think of the others having fun.

The viral defence tablets did eventually work. By Monday morning I was feeling good enough to go back to work. Great.