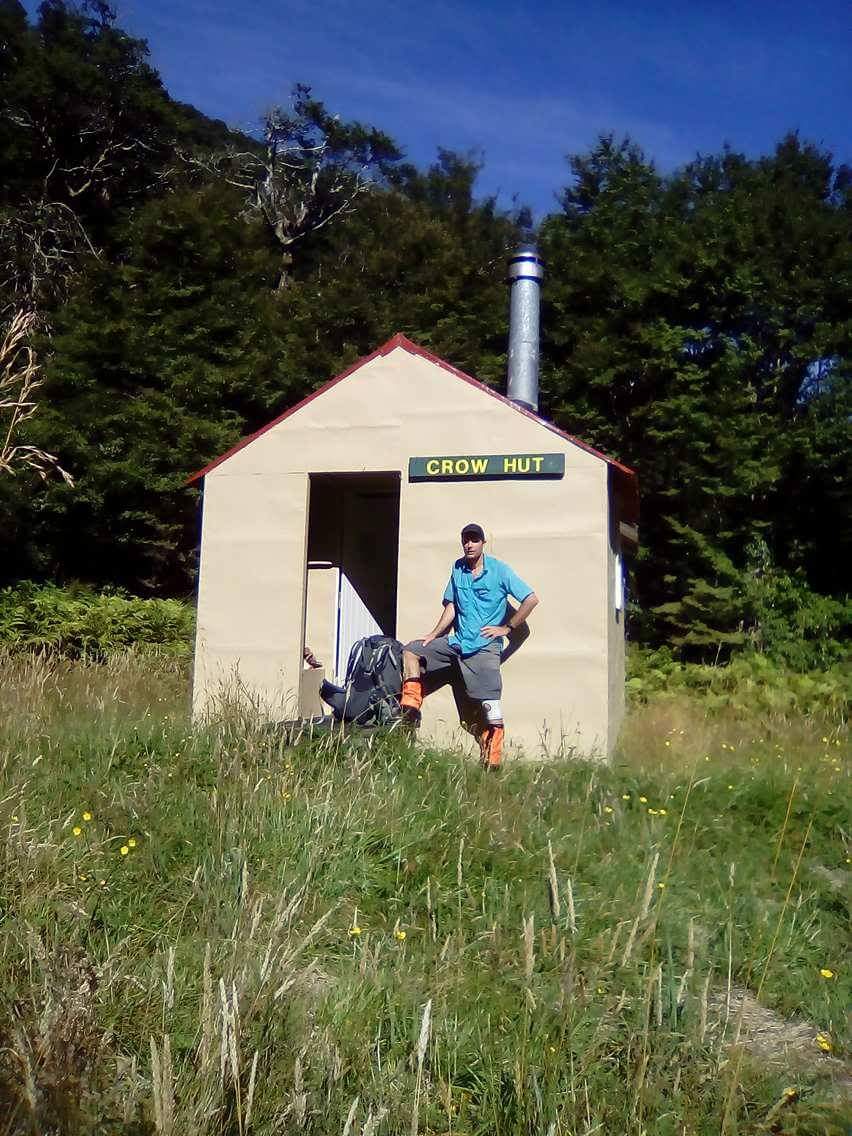 Many trampers choose to take on a challenge to give their tramping adventures a purpose. Te Araroa trail hikers are one example, Kuldeep Nandurkar, who is bagging 900 huts in 900 days, is another. Even amongst our own club members we have some ambitious hut-baggers and long-distance adventurers. Maarten Ruiter is one of them.

Earlier this year Maarten bagged Crow Hut, his final DOC hut of 57 in the Ruahine Ranges. He celebrated his rather quiet and considered adventure with a whisky on the banks of the Kawhatau River. He says it was very satisfying to bag this final hut, but no doubt there was some sadness too, as all adventures big or small, must come to an end.

Maarten joined the Wellington Tramping and Mountaineering Club in approximately 2009. He joined because he had some friends who were already members of the club, and because he already harboured a love of the outdoors. He recalls his first tramp as a teenager, to the now popular Sunrise Hut. “It was a good introductory tramp for a young kid like me because the track was pretty good and it was just the right distance. And the views were amazing and made it all worthwhile.”

His mission to bag all the huts in the Ruahines did not really begin until 2014, when the frequent trips to his parent’s place in Hawkes Bay gave him the opportunity for a bit of tramping along the way. “That’s when the idea came to me that every time I go to my folks I would go to a different hut for the night.” Maarten says once he started on his mission he was determined to see it through. “Once I decided I was determined to get all the huts, there wasn’t going to be one left behind.” Maarten’s exploits even got him interviewed by the Hawkes Bay Today.

The criss-crossing, zig-zagging and looping over the Ruahine Ranges these past three years have taught, or reinforced, many lessons about tramping for Maarten. Lessons about being organized with gear and food, lessons about which tracks to take to which huts (and some secret detours) and most importantly, lessons about making a goal and achieving it. Of course there were hard times – for Maarten this was when the weather interrupted some well laid plans – but there were also good times, such as the satisfaction of reaching a hut after a long hard day of tramping.

Maarten thinks that the Ruahine Ranges are quite unique. Some of the appealing features include its narrowness, making it easy to do corssings. Another is the terrain – it is a bit less rooty than other national parks (here’s looking at you Mr Tararua). Maarten admits he might have a bias towards the Ruahines from growing up in the Hawkes Bay, but others agree that the Ranges are different, even if you can’t quite put your finger on why.

Waterfall Hut is Maarten’s favourite. “It is one of the first huts that took a little bit longer than just a few hours to get to. You can access it from three main directions, from east, west and southeast. So you can get to it and onto other huts in different areas quite easily. The hut itself is standard. But the location is amazing. It feels like you are truly isolated.”

Being the hard-hitting journalist that I am, I put the tough question to Maarten: are you sure you’ve bagged them all? He was quite candid in his response. “Sometimes I do wonder if I’ve missed a hut. There may be one or two private huts that I haven’t got. Having said that I have been to a few private ones too.” He has recently done some bush-bashing at the edge of the Ruahines to chase the phantom Kaumatua Hut. He couldn’t find it and has concluded that it isn’t there anymore.

Having accomplished a challenge like this, it is only natural to want to move onto something equally or more testing. For Maarten, the next challenge is all the Tararua huts. However he says he wants to do them at a slower pace, and with the Club. He thinks he has done about half of the huts, approximately 25. However this challenge may prove more frustrating for Maarten, as he notes he has tried to bag perhaps one of the deepest huts in the Tararuas – Carkeek Hut – at least four times without success. “150km winds, flooded rivers, no water – the have all stopped me from getting to Carkeek.” Perhaps a trip for the club’s next schedule?

Speaking of club trips, Maarten thinks the Ruahines is an ideal destination. He recommends Makaretu Hut. “I don’t think many club trips go there. I recommend that hut because you can make it easy, medium or fit – there are different tracks of different grades going from the same road end. There are five other huts in the area as well which groups with different levels of fitness could go to.”

Maarten has a wee challenge of his own for the loyal readership of the WTMC Newsletter blog – can you name this hut? Comment below with your answer.