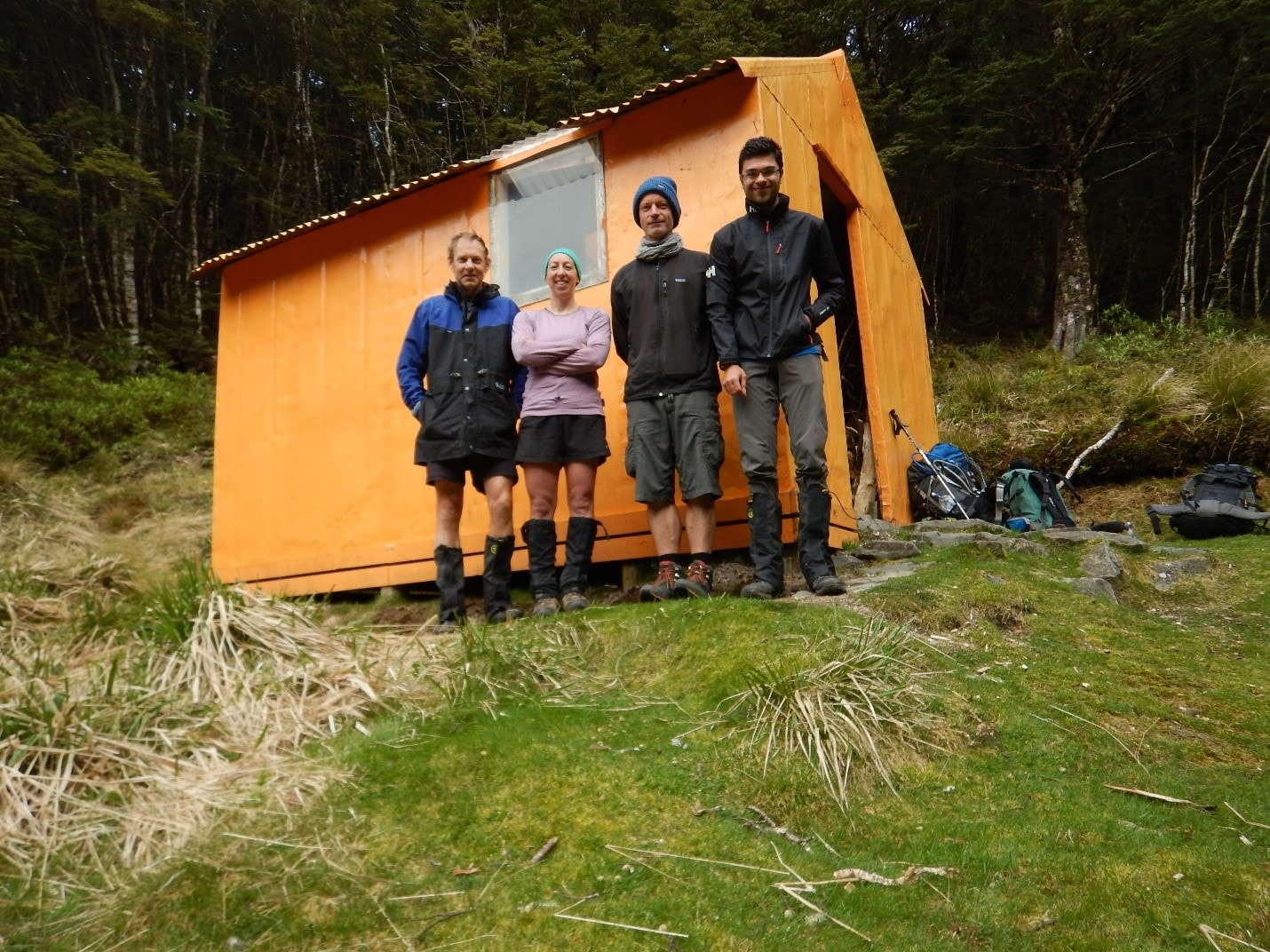 Labour weekend was a good chance to venture further afield so four of us set off from Wellington for the Kawekas on the Friday evening. Kuripapango campsite, on the Napier-Taihape road, is a long-way from Wellington and with holiday weekend traffic and a pizza stop in Carterton we didn’t arrive until 11.45 pm.  Kuripapango campsite was quite full with campers, rafters, kayakers and trampers.

On Saturday morning we started tramping from the nearby Cameron carpark road-end and faced a steep climb of about 700m up to Kuripapango and the turn-off to Kiwi Saddle hut. The weather was sunny and clear and we had splendid views of the Kawekas and over to Mt Ruapehu and Mt Ngaurohoe on the central plateau.

We had made good progress up the hill so rewarded ourselves with a decent break at Kuripapango for morning tea and for identifiying peaks and ridges with the help of map and compass. Stops to consult map, compass and GPS were a regular occurrence on this trip.

We arrived at Kiwi Saddle hut at lunchtime in glorious sunshine after some steep ups and downs from Kuripapango. Much of the Kaweka range was burned off to create farmland in the 1880s.  Unfortunately, the trees were holding the soil and land together so erosion is a big problem.  A great deal of land in the Kawekas is now unstable dirt and gravel.  There was a tricky gravelly descent just before Kiwi Saddle hut.

Kiwi Saddle hut is owned and maintained by the Heretaunga tramping club based in Hastings. The hut is in a clearing in lovely beech forest and is clean, tidy and well looked after.

After lunch we headed along the route towards Studholme Saddle hut – still about 7km away. Our next stop was Castle Camp.  This is a DOC base and is not a proper hut but rather a frame with plastic walls and an iron roof with work benches inside.  There was a group of hunters staying in tents at Castle Camp and they were lounging around in the sun.  They were a friendly bunch and one of them knew Tony Gazley.  They had been helicoptered in and had lots of food and beer.

Castle Camp has an interesting long-drop. It is a box with a toilet seat but with no structure around it for privacy.  In all of my years of tramping I had never seen a ‘thunderbox’ like this.  It was quite pleasant sitting there in the sun but would be miserable in the rain (and difficult to keep toilet paper dry).

Sitting in the sun at Castle Camp was very enjoyable. I think the sun (or beer) had gone to the head of one of the hunters.  He said it was only 20 minutes to Studholme Saddle biv (our next destination).  I was a bit dubious about this as the map showed more climbing and still a few kilometers to go.

We pushed on and left the sun behind us and encountered some strong winds and chilly temperatures as we traversed open tops towards Studholme Saddle biv. After 20 minutes we could see the biv but it still took us a while to reach it.  We stopped briefly at the biv but pushed on to Studholme Saddle hut about 10-15 minutes away.  As we were off the tops now it was much warmer.  In the last 10 minutes Megan overheated and stopped to take off her jacket – just around a corner and a minute away from the hut.  We arrived about 4.30 after tramping for 8ish hours.

Studholme Saddle hut was a welcome sight after our day. We had covered about 13km over some pretty steep terrain.  It’s a four bunker in a small clearing.  The hut is clean and tidy and we had a comfortable but warmish night there.  It’s an insulated hut so we didn’t need to light the fire.  Our meal that night was couscous chorizio plus deconstructed cheesecake for dessert.

The next morning was a bit overcast and windy. We had a short, sharp and steep climb right from the hut to take us up towards Kaweka J.  It took us over an hour to get to Kaweka J – the highest peak in the Kaweka range.  It was very windy and quite cold and we were buffeted around as we climbed.

There is a memorial near Kaweka J to World War I soldiers but we didn’t visit it due to the wind and cold.

We descended and soon saw our next hut – Back Ridge hut. After some debate about the best course of action we dropped our packs before the final descent to the hut.  We popped down to the hut, met a couple of hunters (lounging around), refilled water bottles, filled out the hut book, had some photos and then left.  We still had a long way to go to our destination that night of Kiwi Mouth hut.

We walked along Back Ridge in wind, drizzle and sun. We had a number of stops to put on jackets, take them off and put on sun hats and take them off.  There is some beautiful beech forest along Back Ridge and we stopped for lunch in a mossy spot on the track.  We bumped into a small family group of trampers and quizzed them about one of our possible routes the next day.  What they said about the travel in Kiwi stream was rather disheartening (quite rugged and slow) as this was a route I was planning on taking.

Soon after lunch we dropped off the track and popped into Back Ridge biv. There were a couple of hunters there as well (also lounging around).

Back Ridge was deceptively hard going with lots of ups and downs and we were all quite tired. We also all had sore feet – the gravel surface of much of our route was tough on our feet.

From Back Ridge there are splendid views of the Kawekas and we stopped at one point to view a possible route for the next day. We could also see Kiwi Mouth hut in the far distance and way below us.

Up until now we had not made any river crossings and had not seen any mud. However, just before the hut we had our only river crossing of the trip.  It was great to cool our feet off in Kiwi Stream.  We arrived at Kiwi Mouth hut in sunshine so we were able to dry out our feet and socks.

There were three rafters staying at Kiwi Mouth hut so we set-up the tent flies for the night. The rafters were also fishing and hunting (so were lounging around a bit) but had managed to shoot a deer.  These were the only hunters we saw who had shot anything.

Dinner was a very successful experiment from Megan of noodles, satay flavour, chicken and vegetables. We had sponge, mango, chocolate and gingernuts for dessert.

We were up early again for our last day. We still had a fair distance ahead of us to get back to the car plus the big drive back to Wellington.  We had a few options to get back to the car – the Kiwi Stream route then up to Kiwi Saddle or two inland routes both bypassing Kiwi Saddle.  The family group had spent four hours in the Kiwi Stream plus more time on the track so I discounted that option.  We took the inland route and had a steep climb on a slightly longer route but with overall less climbing than the other options.

We took the turn-off towards Cameron hut and continued through lovely beech forest towards Kuripapango. After the last couple of days walking on hard ground it was nice to walk on softer terrain.

After a brief lunch near Kuripapango we arrived at the carpark about 1.30pm and due to sandflies quickly got changed and into the car and departed. We had a safe trip and were back in Wellington about 7ish.

We had had an excellent few days tramping – great country, good company, top food, fine weather and views, seven huts/bivs plus we covered a great deal of terrain. There is good tramping in the Kawekas and I’m keen to go back…