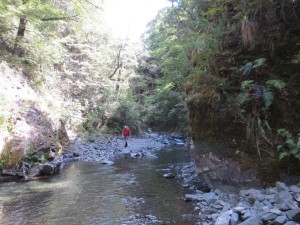 Thanks to Paul and the 5 other punters, for a great trip into the Ruahine tops…a first for most of us.

It was a delayed start from the Railway station due to a spill on the motorway, leaving after 6 instead of after 5…with great relief we made good time after having dinner before we departed and arrived at the Triplex hut in the Ruahine forest park by 10 or after and were in bed by 11pm…. a bed each…yippee.

An early start with low cloud hanging about the hills saw us head up and up to the oh so lovely double glazed Sunrise hut to ‘no view’ as we were clagged in by 10am…no wind though…a short break and we headed onwards and up over the tops to Armstrong Saddle and onto the Maropea tops…the weather improving along the way. Eventually we started heading down to the Maropea river as the clouds cleared and the ‘vast’ views arrived at last. After a decent hike and a few hours slipping and sliding over the slimy rocks in the rather tepid Maropea river we arrived at the new 6 bedded Maropea Forks Hut by 4.30pm. An honest ‘medium’ hike! A bit of everything, uphill, tops, good views and finally a good stretch in and out of the water along the river bed.

A leisurely cuppa was in order on arrival and the rest of the evening was spent reading or in Sharon’s case, a bit of spinning was enjoyed ……for those in the know its fishing…spinning is an angling technique where a spinning lure is used to entice the fish to bite.

Dinner was Paul’s usual pasta surprise, and a good night’s sleep ensued with no snorers! Next morning after putting our damp boots on we were back in the water before we headed up and up to Maroparea at 1511m and onto the main Ruahine Range, after a bit of bush bashing through the standard leatherwood we headed south along the range for about 3 km to Sparrowhawk Biv for lunch.

Then down a  beautiful spur through lush forest with ferns and young rimu trees to Gold Creek and then down the Makaroro River to the van for pick up at the scheduled time of between 3 and 4…success all around.

Thanks to the drivers and our intrepid leader Paul Christoffel and Sharon Branford, Ed Turner, Bernie Dixon, Susan Chilton.