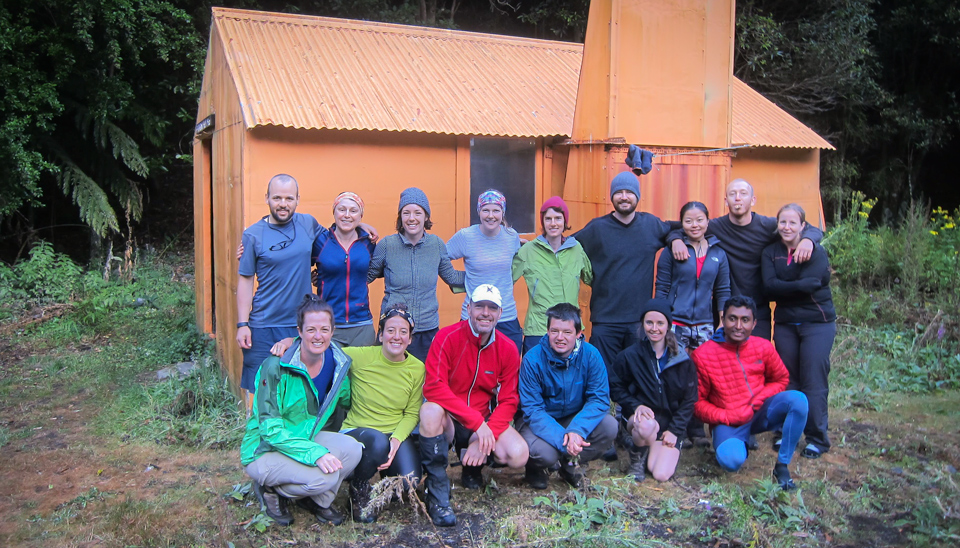 When the Aorangi Crossing has been on the schedule in the past it has attracted a handful of signups. This time however, there were two handfuls – in fact a round baker’s dozen of keen beans signed up. The reason for this, I believe, is simple – people love a challenge. The last club trip to venture into this area strayed off track. With daylight limited, they fought their way through thick scratchy bush down to a river where they could camp, and returned the same way the following day. The challenge was on. Could we do better? Holger and Beth, veterans of the last trip, were back for another try and the rest of us, we were here to try our luck, and ready for anything.

Rather than limiting numbers for this trip, Yenfei, in a feat organisational prowess, welcomed us all on board. With George offering to drive his car out we decided to split the party, with a group tackling the crossing from each end. We would meet, all going to plan, at Pararaki Hut on Saturday night, combine our dinner ingredients and hand over the keys to the club van.

Most of us headed out Friday night, Huw driving the club van. George, his sister, Aimee and Tracy would join us Saturday morning. This arrangement led Juan to brand Aimee a traitor for her defection to her own bed on Friday night rather than opting to join us camping at the Pinnacles road end. But as events played out, Juan would be feeling very grateful to Aimee when she arrived Saturday morning. After dinner in Martinborough, we arrived at the Pinnacles campground at dusk. The tents were soon erected and we began to plan for the morrow. A fair number of us needed to fill our drink bottles. A sign over the tap by the toilet block warned us that the water was not potable. We considered boiling some water and leaving it to cool overnight, but no one could really be bothered. Could we get a message to Aimee, asking her to bring, hmm, say a couple litres of water for each of us, hmm, 20 litres? We made a survey of who needed water and rounded our figure down to something a little more manageable. The message was sent. And received. Hallelujah! Juan begged some water to brush his teeth and we all began to think about bed. But there was one more question to decide – what would be our groups for tomorrow? We felt it was probably prudent to make sure we had tents enough and cookers, fuel and some ingredients that could be charmed to resemble the planned dinner of vegies, tofu and noodles, in each group. You know, just in case. We stood around in a circle. Who had what? Should we redistribute the gear? We stood around a bit more, then decided just to go to bed.

In the morning Yenfei made an executive decision and divided the groups. We each just kept what gear and food we had and all was well. Aimee and co arrived right on time, and with the much-desired water. Thank you, Aimee. After a couple false starts in which key items of gear belonging to the group starting at the Pinnacles were almost left in the van, my group headed off in the van to the Mangatoetoe road end.

It was grey and threatening rain as we heading up the valley. There is a sort of track, but mostly it was just up the river. We saw two hunters, and their three dogs who came to check us out as we fought our way through scrubby undergrowth down to the riverbed. We were rather ungainly prey, but we did our best, crossing the river here and scooting up the bank there, progressing up stream with feet still dry. Without too much effort we reached Mangatoetoe Hut and stopped for a morning tea break. We rashly, as it turned out, promised ourselves we would be at the next hut for lunch.

The next leg began easily enough, but the river valley was narrowing and with the stream more bouldery and slower going we kept our eyes peeled for those orange markers that would show us the easiest path both across the river and through the bush on either side. The people in my party who did not know what ongaonga looked like soon found out and as we progressed, I think all but myself, at some point unwillingly received its fiery kiss. There were soon calls of ‘on your left’, or ‘watch out straight ahead of you’ echoing down the line as we pushed on through the bush margins and scrambled up and down the riverbank. The next section of this leg involved a little climb and a sidle to get over into the next river valley. It didn’t look very much on the map, but for a fair bit of this section we were running or bum-sliding, as was our wont, across steep sections of loose gravel. Where there were tress, or indeed any kind of vegetation, I grasped it gladly, at other times, I just ran and hoped for the best. We got down to the river, and without consulting the map properly, I made the assumption that we were through the tricky bit. Should we have lunch here I asked, or continue on another, perhaps, 45mins to the hut? We opted to continue. A check of the GPS app on my phone a short while later showed us we were only halfway through the tricky bit, with more sidling yet to come. We had a snack and pressed on. Mid afternoon saw us at the hut. We refuelled and set off for the last leg.

We continued along the river, then up what was quite a spectacularly narrow spur, a further pull up the ridge, then more sidling, ups, down, and then a rather steep down to the river, and there we were finally – Pararaki Hut! I was glad to see the other group. They already had their tents set up and had some water on the boil. Ah! They told us they had been there about half an hour, and were glad to see us too. Group food was retrieved from packs, everyone chipped in with cutting vegies and Yenfei did sterling work getting a truly abundant amount of noodles cooked. We swapped stories of our respective days and were left feeling a little apprehensive as to the hills ahead for us. The other group, had, they told us, found where they had gone wrong last time, but had instead suffered another navigational error that had seen them crashing through the bush for about an hour. Hmm, what were we to make of this? We resolved to keep our wits about us.

A little while after we had got our camp set up, George and his sister emerged from the bush. George was suffering an old ankle injury, and it was his sister’s first tramp in the New Zealand bush. We are still waiting to hear if she has forgiven him.

We all resolved to start early the next morning and both parties were up and on the track by 8am. We made steady progress up our first hill of the day, and it was delightful to see the sunlight start to slip through the ferns as we climbed out of the valley. It was shaping up to be a really fine day and we were treated to some lovely views towards Lake Ferry as we came along the ridge. The descent to Washpool Hut was steep and all-over loose gravel, but having been prewarned, it did not seem quite so bad and we managed tolerably well. We lazed in the clearing at Washpool Hut enjoying a well-earned lunch. Then it was up, up, up again, shorter and steeper this time, our progress on the map moving at a crawl as we covered height at the expense of horizontal distance.

So far, the track had appeared pretty obvious and we wondered how the others could possibly have gone wrong. We kept our eyes and minds close to the map as we neared the turn on the ridge – the scene of the navigational blunder on the first trip, but all seemed pretty clear. This corner is the highpoint on the ridge and we ducked up to a rocky outcrop to take in the view.

We continued our progress along the ridge, again quite baffled as to where the other group could possibly have spent an off-track hour the previous day. The last section of the ridge is a four-wheel-drive track. But what was this gorse the other group had failed to mention! It was like walking along a straight path in a maze that is trying to eat you. The gorse towered above our heads and closed in on either side requiring us to sacrifice our forearms to save our faces. Then we were on the Pinnacles track and out to the carpark. It was 6:30pm and we felt sure that the others would be waiting for us in the carpark. No van. We couldn’t quite believe it. Was that George’s vehicle there? Yes, it was. What could have happened to them? Given their track record yesterday, could they have missed a turning somewhere? We sat in the sun and began munching on snacks with a kind of gleeful worry. Would they ever come to collect us? we thought selfishly. Well, we did have tents to camp should it come to that. We waited and wondered. But then, before we had really begun to wonder if we should in fact save some of our snacks, there was the van. It was a happy reunion. Turns out they had just taken their time over the tricky bits and had underestimated the amount of climbing the day involved. We all returned tired but happy to Wellington. The end.

Thanks everyone for a great trip.