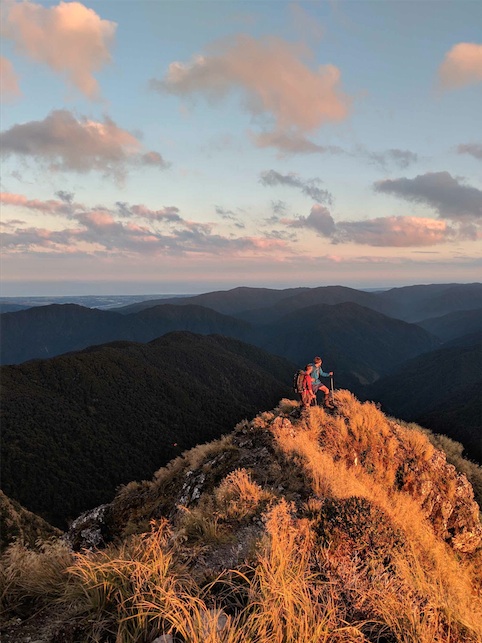 I first heard about this challenge a year or so ago when I found out about the book full of all the previous trip reports, most recently updated and published by Tony and Megan from our club. The challenge itself started out with the simple rule that you need to work until closing time Friday, get the job done, and be back at your desk the following Monday morning. It had to be in your regular tramping gear, and how you did it was essentially up to you – provided you followed the accepted route over the full Main Range of the Tararuas. Over time the challenge has morphed somewhat, such that the added spice now asks for you to achieve the whole route within 48 hours, or for the absolutely committed, under 24 hours.

A few stats about the route. The total length comes in somewhere around the 80km mark, but can vary by around 10km depending on whose GPS you are using. It traverses 35 named peaks, and includes around 6800m of vertical gain. A large majority of the route is in the sub-alpine zone, so is subject to very changeable weather.

We left Wellington at 4pm on Friday night, and picked up our driver Nick for the weekend in the Wairarapa. After a flying stop to grab some kebabs on the go in Carterton, we headed all the way out to Putara Roadend, always reminding each other that we had to walk this entire way back! There was some faffing at the start line, partly because of the tiny packs we all had (and debating as to how we could shave those few extra grams), and also because there was a real air of nervousness as we contemplated what lay ahead.

We eventually said our goodbyes to Nick at 7:35pm, and began our lightning-fast walk to the sound of Gareth’s comical foghorn app on his phone (it soon lost its comical element) The air was heavy and still for the first couple of hours as we smashed our way through the first few kilometres up to Herepai Hut, arriving there at 9pm. A 5-minute water stop and we were off again, this time onto the steep incline up the ridge towards East Peak. This section took far longer than I had anticipated, this being my first time on this route to Dundas. Soon after the mist descended onto the ridge making the navigation for the last few kilometres quite difficult. We arrived at the sign marking the turn off to Dundas Hut just before 2am, and were tucked up in bed very soon after.

Three and a half hours later, the billies were boiling and we were packing to move again. We kicked things off at 7am and made short work of the extra climb back to the sign from the previous night. The going was really good all the way over Logan and Dundas, notwithstanding the Westerly wind which was driving hard for much of the morning. Eventually we broke out of the mist on the way towards Arete and the wind died off, leaving the sauna that would continue to cook us for the rest of the day. We were up and over Pukematawai before 11am and spirits were high as we eyed up the huge section towards Nichols under the tree line. Easy peasy.

It was around the last kilometre to Dracopyllum Hut where I think the enormity of this challenge set in for me. Still not even 2pm and the constant undulation that was previously hidden to us under the tree line had me wishing I had opted for running shoes and not my full weight leather tramping boots. Arriving at Dracophyllum Hut in the heat of the day, I was really tiring. Here was where I made what was to be a big mistake. Instead of taking on a lot of high salt, energetic food, I had just one tuna pack and a mouthful of sweets. Instead of packing more real food in my pocket for the next section, I stuffed it all my pack, and filled my pockets with sweets.

Galvanised by a 15 minute lunch at Dracophyllum (the only significant stop all day), we took off again, painfully edging our way to the eventual climb out of the trees onto Nichols, and then on to Crawford. We arrived on the summit of Crawford at 4pm, and for the first time caught sight of Maungahuka and the rest of the Main Range behind it. But oh so far away.

We’d been going almost 9 hours straight in very hot sun, still with some 4 hours to go. It was here that Gareth and Stuart started to edge away from us, and by the time that we arrived at Anderson Memorial Hut at 5:20pm I was fading. I’d read in previous reports that it’s here where for many a 48-hour attempt becomes a 72-hour one. I totally understand why now. You’ve already completed the time and distance of a respectable medium grade weekend tramp, and there is just so far to go. Further, you’re tired so the terrain slows down, and the negative thoughts start creeping in. The battle for your own mind has begun.

From Anderson the hills keep coming, and big ones at that. Kahiwiroa down, just Aokaparangi now – a literal rock climb in places from the North! Trust the Tararuas to save the hardest climb to last. But no, I forgot Wright! I can promise you you will only forget Wright once. After doing Aokaparangi, it’s the final sting in the tail of day 2 on the SK. By this point, the sun is setting, Gareth and Stuart are distant specks on the final slope to the hut, and I’m going dizzy. With around 800m to go to Maungahuka Hut, the final peak of Simpson just behind us, I collapse. I have officially run out of energy. The feeling of nausea is too much to take and after attempting to get some electrolytes down I am sick. Unable to keep anything down, I steady myself and Elisabet does the right thing to throw a few more layers on me to prevent any further loss of body heat. It takes me a full 15 minutes to regain some form of determination and by now it’s dark, so the head torches go on. For the next 20mins I drag foot after foot up the steady incline until I am presented with an array of head torches from within the hut. At some time after 9pm we step onto the deck of Maungahuka Hut and I go immediately to my sleeping bag.

The next morning I have the most incredible craving for salty food. I eat my entire freeze dry meal cold (made for me the night before), followed by two packs of tuna, crackers, cheese. I drink almost 3 litres of water over the course of the hour and come 6am, the four of us are on the deck outside ready to set off as the sun begins rising.

We absolutely flew through the ladder and the rest of the Southern Main Range, arriving at Kime Hut just before 10am. Even some of the banter came back! A short 5 minute break to stuff down some food at Kime Hut and we were off towards Hector. The sign outside Kime suggests it can take between 5-6 hours to Alpha Hut but we knew we needed to do it in less than 3 if we were to have enough up our sleeve for the Marchant Ridge. There was no stopping at the summit of Hector – just a quick handful of Gareth’s salty soy mix snack (still craving that Sodium…) and it was pedal to the metal down towards Aston.

It was still just 12noon as we approached the summit of Alpha and began the descent to the hut, so we knew we were on time. I felt ever so slightly better about things when I arrived at the hut, realising that both Gareth and Stuart were feeling the pain too – even if most of it was mental. There wasn’t much said at that stop and we afforded ourselves a good 20 minutes here as we knew the ‘best’ bit was still to come.

We left the hut at 12:50pm, meaning we had over 7 hours to get this job done. We’d done it in 5.5 last week coming up from the road end so we were quietly confident. The climb up to the start of Hell’s Gate was the last time we saw Gareth and Stuart; motivated by their burning desire to get this bloody thing done, they dug deep and fired off, going for the fast-finish strategy. We kept the pace steady and I made sure to learn from yesterday’s mistakes by refuelling little and often. I naturally walk quite a lot faster than Elisabet so we came up with a good system – I would stroll off ahead for around 30mins, before stopping for a breather until she came into sight again. This worked well as it allowed me to find my stride but also kept us together to motivate. After a couple of hours on the Marchant Ridge, I was beginning to go a little crazy with the same recurring thoughts. It’s a strange sensation – it’s almost as if your brain goes into auto pilot as a way to stop you thinking about the physical tiredness and pains. I had to put some music on nice and loud on my phone which really helped me focus, even if just for another hour or so.

Today was even hotter than the day before, so we were eternally thankful for the fact that most of the route was below the tree line – the one section beyond the top of Marchant Peak which breaks out into the open again was really difficult. The heat was just so oppressive. My heart leapt once the ground beneath me started turning into that familiar golden clay – I knew we were closing in. I waited at the junction near the old Smith Creek Hut on the Dobson Loop until Elisabet caught me up.

We gave each other a massive cheer and motivational high five, calling out that we were now just 5km away from the end. The Dobson loop gets easier and easier until it’s more or less and long straight stroll, and with every km down we cheered some more. I was loud and vocal to really drag every last bit of motivation out of the both of us. Eventually, finally, painfully, we arrived at the final DOC sign indicating left for the YMCA car park. Elisabet sped up with glee, so much so that I found it hard to keep up all of a sudden.

And before we knew it, over the last little rise, there it was; the little hole in the dense bush line which opens out into the Kaitoke Road end. We stopped for a moment for our own personal congratulations, before emerging into the setting sunlight with Nick, Gareth and Stuart cheering us across the finish line. Nick had brought Doritos, liquorice and fizzy drinks and it was glorious. We stayed there at the road end for almost half and hour as Elisabet and I composed ourselves and got changed, ending with a final group photo. The finishing times: Gareth 45.5, Stuart 46, Nick and Elisabet 47 hours.