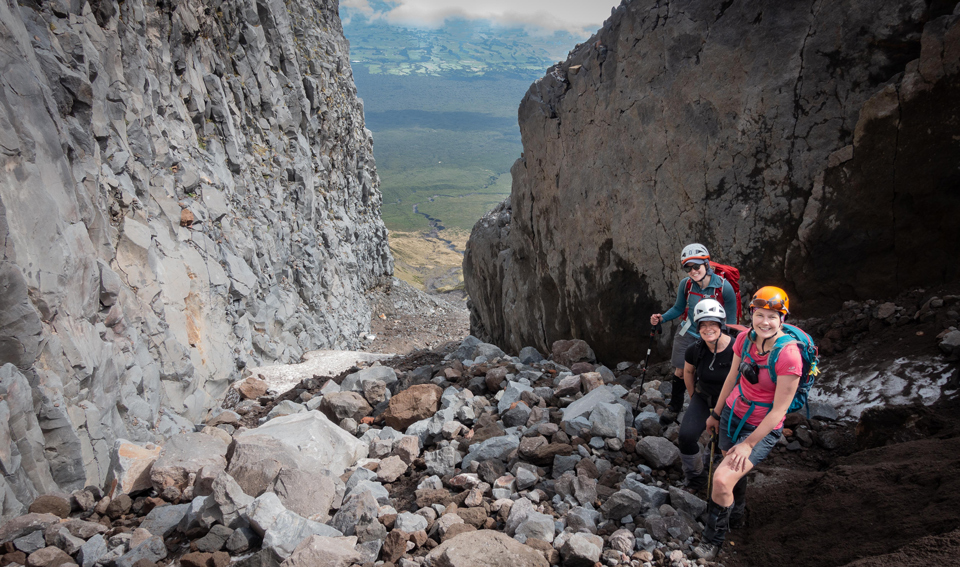 This trip was inspired by a crazy overnight ascent of the south side of Taranaki back in November when I realised I had now climbed Taranaki from the North, East and South sides which left only the western aspect to complete the compass points.

A lot of googling and asking around revealed very little information about the climbing to the top from the west side – it seems it’s a rarely visited part other than people going around the mountain along the tracks in the bush. So it went on the schedule for March.

Before the sign-up sheet was even printed I’d had a van-full of people email me wanting to come. We ended up as a team of ten….only four more than the number of bunks in Kahui Hut where we were planning to stay.

We started early from Kahui road end, from the very edge of the National Park boundary at around 400m asl which left over 2000m of ascent for the day ahead if we were to reach the summit. The first 400m were on easy graded track direct to a Kahui Hut which we covered in under two hours. We offloaded all our overnight gear at the hut so we could travel light for the steeper stuff to come. The old track marked on the map on a bearing towards the summit from the hut provided us some more straightforward travel for the next 400m of ascent working our way up between the steep sided streams that run off the mountain. We popped out onto a beautiful grassy and mossy alpine meadow around the 1200m mark from where we could assess our route above, below, along and around various gullies, bluffs, gorges and scree slopes. More than one route looked possible but everything looked steep and challenging so we just had to carry on up and see what we found.

The views down were spectacular, and this side of the mountain was very different to the other aspects so we were all happy to be there on what was turning out to be a great weather day.

We reached the top of a grassy tongue at around 1740m and stopped for a snack break, to put our helmets on and had a quick discussion about what to do if you dislodged a rock, which seemed a likely scenario looking at what was above us.

From here travel slowed considerably as the terrain steepened, and we were now onto loose rock of various sizes which took a bit of negotiating. There was a snow-filled gully to the right hand side with some rocks to the left of it which from below looked simple to ascend. Matt, who’d offered to scope the route even further to the left called down with advice for the rest of us to stick to the snow gully. Tony S was upfront and made steady progress up but I was starting to realise that it was trickier than it first looked. Marie took up a mid-gully station to coax us all up – a chimney technique pressing against the snow one side and the rock the other proved successful. We reconvened with Matt above the gully where he was waiting patiently, having been unable to move for fear of sending rocks flying down into the gully where we were. It had taken us more than an hour to ascend 170-odd metres, and many of us were feeling a bit nervous about the loose rock situation so over lunch we discussed the plan from here. With less than an hour to our dedicated turn-around time it was clear we weren’t going to make the summit which was still 600m more ascent of unknown terrain…and the lack of available info about Western approach summit travels was also making sense!

Everyone was happy to start descending and we found some much more friendly sandy scree (thanks to Matt’s alternative ascent route) to slide down. Back on the grassy slopes in the afternoon sunshine we made the most of a relaxed descent with more than one stop for snacking, snoozing and discussing when we’d be back to explore this side of the mountain further. Next time I would stay even further to the left to ascend where the footing looked better and there was no snow gully. But who knows what happens further up….that’s for another adventure!

Back at the hut we enjoyed a couscous meal and a few rounds of bananagrams before bed. For some reason no one was keen when I suggested we use the good weather for a second summit-attempt on Sunday morning. A leisurely walk out and coffee and eggs in Opunake won out and we made it back to Wellington ahead of the Womad traffic.

There is definitely more to come of this West Side Story!