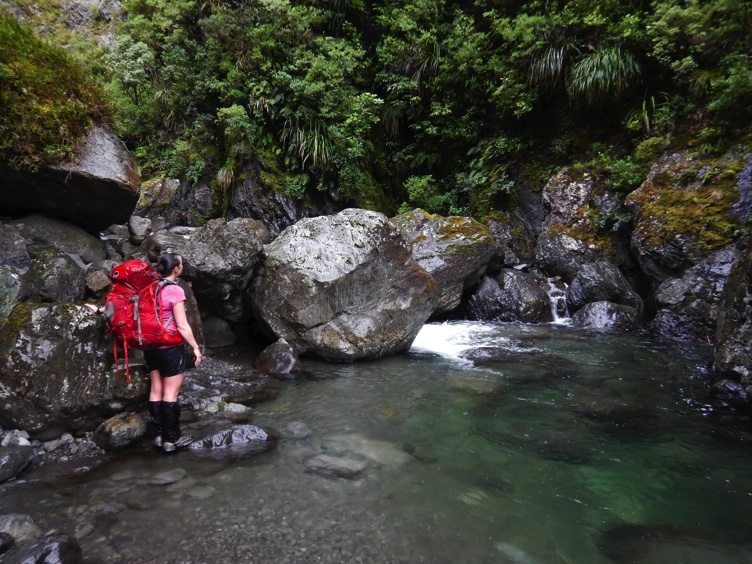 Matt had put a trip to visit the old Angle Knob hut site on the schedule which sounded interesting. He planned on getting to the site via Baldy and the Broken Axe Pinnacles which are both places I have never been to. The plan also included staying at McGregor biv which I had stopped off at once but never stayed at. So all of these reasons appealed to me so I signed up.

Angle Knob Hut was blown away during a storm in 1980 (read more about this here : https://www.wildernessmag.co.nz/rest-peace-angle-knob-hut/) and was replaced by Jumbo Hut (which has also recently had trouble with the wind).

After dinner in Wellington we had a quick trip to the Holdsworth roadend. At the roadend we met an old WTMC member Bruce Murdoch who gave us all sorts of information about Angle Knob. This information included the fact that there was an old set of bunks from the hut in the bush near the site of the old hut. At the roadend we also bumped into some friends of Megan’s who were going canyoning/exploring near Peggy’s Peak.

We tramped up to Atiwhakatu hut in good conditions and found an empty room for the night.

The weather on Saturday morning was pretty windy with some drizzle and this made it unlikely our route over Baldy and the Pinnacles was going to be possible. However, Matt had already thought of this possibility and had found a route to the hut site that involved travelling up the upper Atiwhakatu river and then heading up a ridge to the site.

We walked upstream of Atiwhakatu hut on the track that goes to Mitre Flats hut. Just past the swingbridge over the Atiwhakatu we started to travel up the river itself. The river soon began to become rougher with massive boulders to scramble over and around, large log jams to negotiate and many waist deep pools to cross. This part of the tramp was very enjoyable and we all liked the physical and mental challenge of the travel upstream. There are some deep pools in the upper Atiwhakatu and it would be lovely on a hot day to stop off and have lots of swims while travelling up the river. Luckily for us the river was not running too high or fast but after heavy rain it would be impassable.

It took us about three hours to travel just less than three kilometres up the Atiwhakatu river. This gives an idea of how rough the travel was and of how much time it took to negotiate the various barriers in our way.

After lunch we started climbing a ridge that leads to the site of the old hut. The first part of the route was steep with outcrops of bush-lawyer. However, once we had climbed the first hundred meters or so the travel became a bit easier as the bush opened up somewhat.

As we ascended the ridge towards the bush line I started to become worried that we would have a large band of leatherwood to force our way through before emerging properly onto the tops. As the bush petered out there was some leatherwood in patches. Megan was in the front by this time and soon after she ducked under a leatherwood tree we heard her whooping and she shouted out that we had found the site.

We emerged from the bush (and the one leatherwood tree) and found a solar powered weather station and small shed on the site where the hut used to be. We hunted around for 20-25 minutes for remains of the hut and the bunks but could only find an old 40 gallon drum and a couple of pieces of timber. The site was very exposed and the wind was cold and it was drizzling so we did not spend any more time looking for hut remains. We left the site and continued ascending up to point 1397 (north-west of Jumbo peak).

We had to climb a couple of hundred meters up to 1397 and this was through tussock and small clumps of leatherwood. There was no real trail to follow which I was surprised about. Many of the ridges in the Tararuas have trails worn by trampers and I was expecting a trail between point 1397 and the old hut site. Over the years many people must have travelled to the old Angle Knob hut site but we could not see any kind of trail.

It was windy on the tops with some rain and we were buffeted around a bit. Once we reached point 1397 we travelled quickly to Jumbo peak and then down to Jumbo hut. Jumbo hut was closed last year due to the risk of the hut being blown away in strong wind. The hut is now open again after DOC secured the hut with new and strong looking cables to hold it down securely.

We arrived at Jumbo hut just after 3.30pm and after eating most of Matt’s packet of chocolate biscuits and some discussion we decided to keep going and to get home that same night. Although a father and son team had the fire going in Jumbo there were no magazines or books and we had no cards so it would have been a long afternoon and night there for us.

We descended down to Atiwhakatu hut which we had left about nine hours previously and found the hut crowded with people. We bumped into some more friends of Megan’s who were staying at the hut for the Saturday night.

A couple of hours later we were back at the car and on our way back home. We had a really good tramp and had reached the goal of getting to the Angle Knob hut site. We had travelled over some interesting and challenging terrain so thanks to Matt for organising and leading such an enjoyable tramp.