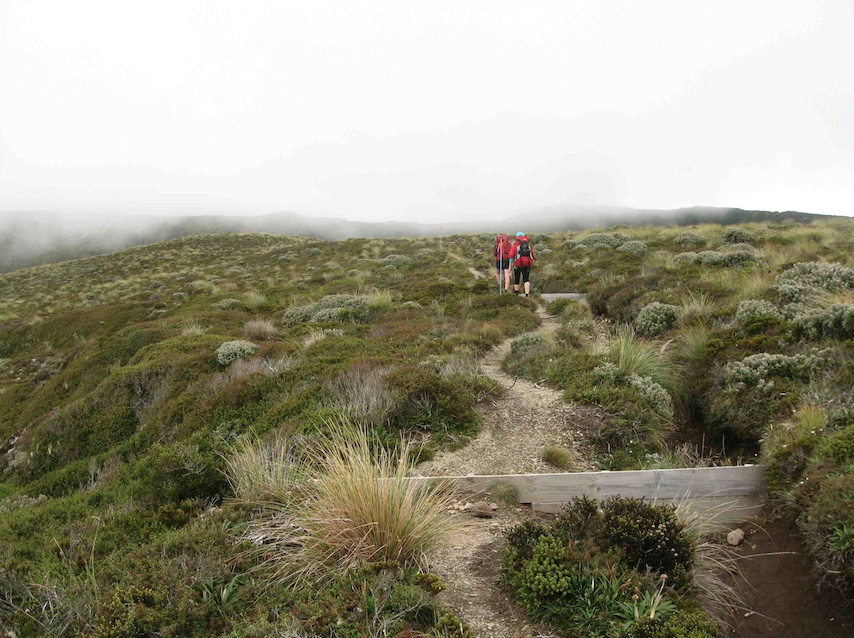 I hadn’t been to the Kaimanawa ranges for over a decade. Would it be as awesome as I remembered? The answer: yes. Even without the clear weather that would have given us views of Mt Ruapehu, this is still a fabulous track.

In fact, awesomeness was waiting for us as soon as we stepped from the van. It was 11pm, no moon, and the sky was the most glorious canopy of stars. This was no green-top trim-milk milky way, but one that was thick and creamy and spilled all across the sky. We were all pretty tired however, so after setting up the tents, we took one more look at the universe then crawled in to bed.

After a bright and early breakfast, we bade farewell to the Medium Fit group who were taking the long route to Waipakihi Hut via Urchin and Thunderbolt. We then completed our own pack down of tents and drove to the start of the Umukarikari Track. The first little while is a climb up through the bush. It was a steady pleasant climb, and we had the company of a robin or two who came to check us out when we stopped for a snack. On gaining the bush line we were all keen to see what the weather had in store for us. It was sunny, but cloud hovered over the mountain and our long-distance views were a wall of grey. Our attention therefore, turned to what was closer at hand. The ridgeline is home to mosses, plants and shrubs of great variety and beauty. The closer you look, the more you see. Views down the valley were also to be had, and the cloud funnelling up and whipping over the low point between Sharp Cone and Umukarikari was most dramatic.

On leaving the road end, considerable anxiety had been aroused in our group by the presence of a van emblazoned with a high school logo. Would we arrive at the hut to find it overrun by teenagers? Helen speculated that they would probably be doing the wilderness experience thing and be camping out. Such optimism was not shared by the entire group, and we opted to swap out one of the club flys for a tent. Waipakahi Hut is visible from the ridgeline for quite a distance and we peered at it carefully. We couldn’t see any teenagers.

We arrived at the hut about 3pm. No teenagers. There was only one hunter, down from Cambridge, and a young woman from the States, now living in Christchurch. A quick read of the hut book assured us that the high schoolers were doing their Duke of Ed Silver and were spending Saturday night camping further down the valley. That established, we promptly took over the hut ourselves lazing around on the deck and unloading our group gear in the kitchen.

We spent a very pleasant afternoon sharing a yarn, enjoying the view, enjoying our snacks, and for some, enjoying a nap. And every now and again we peered up at the ridgeline to see if the Medium-Fits were coming. They weren’t. But watching that empty ridge became the spectator sport of the moment. While cooking dinner one of us might pop out to the deck, and if they stayed too long or appeared to be looking too intently, that would bring the rest of us out. ‘Do you see them?’ ‘No.’ ‘Oh.’ We considered when we might reasonably expect to see them. Not until 6 or 7pm surely. They arrived at 7:15pm.

Simon was the first to emerge from the bush, and we weren’t at first sure if he was one of the medium fit party, or perhaps the hunter whose sleeping bag was in the bunk room, but whom we were still waiting to meet. Then Kevin’s orange hat was visible and this was followed by three other figures, so there they were, all accounted for. We had already eaten and cleaned up our dinner, so put the billy on for them.

By now we were ready for desert. So as not to torment the Medium-Fits as they waited for their food to cook, we decided to prepare and eat our desert out on the deck. Up to this point, I had only heard rumour of the famous chocolate fondue, and was very excited when Uta announced that this was to be our dessert. Melted chocolate, real cream and fresh summer fruit was a winning combination. We sat in a tight circle around the pot, but could not help leaving a trail of drips leading from the pot to each of our mouths. A hungry Kevin eyed us and joked he would be licking the spots from the deck.

Despite the ample supply of bunks, we did also set up the tent and fly that we had brought. Although beautifully situated, the hut itself with its metal and wire mesh bunks didn’t promise the most comfortable of nights. The wire mesh bottoms of the bunks sag a bit and headroom on the lower bunk is rather limited. I almost scalped myself while trying to take off a jumper in the middle of the night. I slept ok, but was at first a little too cold, and then boiling hot. In my heat induced delirium I dreamed I was watching a musical episode of Game of Thrones (disclaimer: I have never watched an episode of Game of Thrones in my life, but was perhaps inspired by the dramatic, LotRs-esque scenery – the hut really is beautifully situated).

Next morning, we headed off leaving the Medium-Fits to finish up a leisurely breakfast and to follow us later. The weather for our return along the ridge was much the same as it had been the previous day, with perhaps a little more mist, and also somehow, a little more sun. Sun and mist were battling it out, but sun did not win enough rounds to banish mist from our (potential) view of Ruapehu. Not to worry, we had our eyes on a different view – the ridgeline behind us, upon which we expected to see the Medium-Fits at any moment. Then during one snack stop – there they were, just coming up the ridge! We felt like Hobbits pursued across the mountains. Could we hold them off until lunchtime? I love travel on the open tops, and there is something about the Kaimanawas that almost makes you feel you are in the bigger country of down south and part of some dramatic adventure.

We chose to stop for lunch in a sheltered spot just by the bush line. We had not long sat down when the Medium-Fits turned up. It was nice to have lunch together and we bathed in their generously expressed surprise that we had got so far (before being caught). We greeted them warmly, and did not let slip that we had been imagining them as orcs. Then together we walked back down through the bush and to the van.

A lovely weekend spent in good company. Thanks everyone.