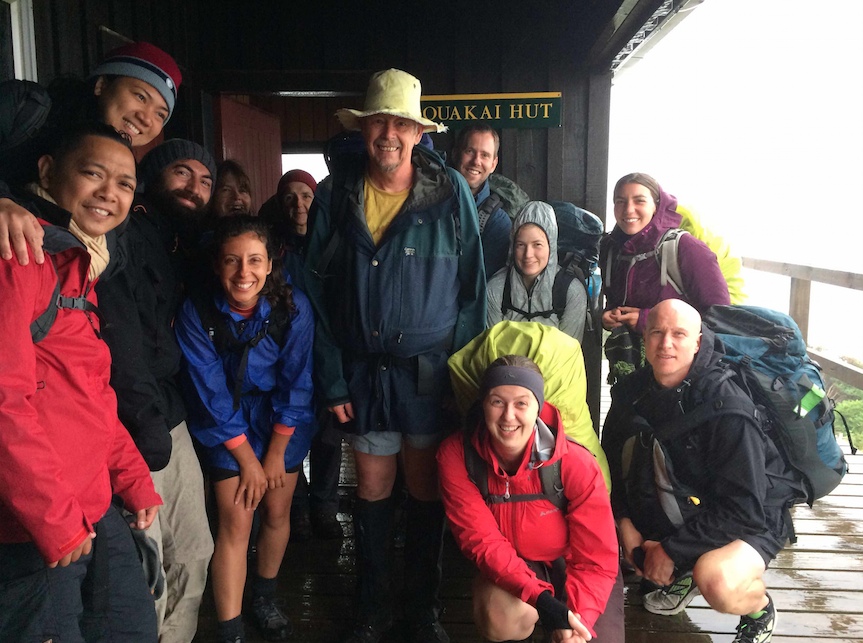 Our trip started badly which was luckily not a sign of things to come in terms of fun and mood, if not weather. Traffic out of Wellington was slow and the sun was blazing into the van turning it into sauna. It took us about an hour to realise we hadn’t actually turned the A/C on so once that was on things got a lot more comfortable.

We stopped in Bulls for some Thai food – reviews were extremely positive, and Indian – reviews not so good. Things went smoothly the rest of the way apart from when I tried to miss a major turn off. The journey finished with a dramatic and hypnotic drive up the never ending s-bends of the Egmont Road. The road was full of mist and the vegetation has created a tunnel-like passage that is quite impressive.

After stumbling in and waking up the inhabitants at the Camphouse, most of us got a good nights sleep. In the morning David took advantage of the kitchen to cook himself some bacon and eggs while the rest of us settled for cereal. Weather-wise we had feared the worst as the forecast was not good but on Saturday the rain mostly stayed away. In the morning it was overcast but we had surprisingly good visibility. From the Camphouse we could see all the way to the coast and the mountain also revealed itself in (almost) all its glory.

After reading about the Camphouse’s impressive history as a barracks used during the New Zealand Wars (in another location in New Plymouth) and finding the now blocked up firing slots in the side of the building, we started the walk. The initial 30 minutes or so was actually one of the harder parts of the whole trip as it was straight up to the Holly Hut Track which then evened out to a much cruiser gradient. As we rounded the mountain in an easterly direction the views to the coast continued. We could see the characteristic circle of native forest around the mountain followed by the patchwork of farm land and New Plymouth and the regions other towns in the distance. The landscape around us on the mountain was also spectacular. At times it looked like a temperate version of the table lands of Arizona or perhaps somewhere in the Pyrennes. This last suggestion was squashed by our trip’s European expert Diana, who knows a thing or two about that part of the world. After skirting along this undulating around the mountain track for about 90 minutes we found Holly Hut where we stopped for a pleasant lunch on the porch. We had a chat to the first of our international friends – Anna a solo walker from Germany. A little rain did not ruin our break.

The second half of the walk that day began by crossing the Ahukawakawa swamp via a handy boardwalk that mud almost threatened to submerge. Mount Taranaki had re-appeared from cloud and had a cool cone like hat on it’s top. Sensei David told us this was a harbinger of heavy rain, dum dum dum duuuum….

The following climb to the hut was a hard 90 minute-ish slog up the guts past The Hump and onto the Pouakai Track. Rain started falling with about an hour to 45 minutes to go and turned torrential for the last 20 minutes or so. However, we did get beautiful views looking back over the swamp before the rain hit and also some goblin forest-esque trees along the way. After getting drenched we were all relieved to reach the hut and proceed to stink it up with our sweaty, wet clothes and bodies.

We had a fun night in the hut eating yummy food, playing cards and getting to know some of our hut mates. David rehydrated and cooked a tasty pasta dish which was followed later by chocolate fondue and biscuits. When these plain biscuits ran out, some of us gluttons even used Jimbo’s triple chocolate Farmbake cookies to get an extreme chocolate fondue overload. We met a lovely and interesting young couple Quentin and Natalie (French and American) who were only three days into their NZ stay (part of an impressive round the world trip). We also befriended Shirley and Chester originally from Manila in the Philippines and played a bunch of card games they taught us. The night was capped off with a few murders in ‘Assassins’. We were pleasantly surprised the next day to find out that these youthful characters actually had three children back home being looked after by their grandmother. A weekend away from their kids probably explained their carefree and laid back mood.

Unfortunately Sunday’s weather was super rainy, but the mostly downhill return trip was made fun by the presence of our new international friends who chose to accompany us. The rain and muddy conditions only allowed a brief stop at the Kaiauai Shelter for high energy snacks. We powered ourselves through the dense, dripping vegetation and muddy track. I thought the most impressive sight of the day was the canyon like crossing at the Waiwhakaiho Stream. Some heroes amongst the group forged ahead toward the end of the day to collect the van at the North Egmont Visitor Centre. Again the Egmont road was impressive but the ‘s’ bends seemed to go on forever as tired bodies cried out for an end. False claims of car park sightings did not help (Sorry Jim and Clair!). These heroes then doubled back to pick up the rest of the team at the track end. We stopped at a cafe in Stratford soon after to treat ourselves to some well deserved ‘urban’ food. The rest of the trip went smoothly apart from some poorly performed and strangely mournful renditions of ‘Ya Can’t Beat Wellington on a Good Day’ and the Wellington Hurricanes classic and crowd favourite…. ‘Hurricanes, Hurricanes’.

Thanks to our leader David and all the team for making it such a great trip! 🙂