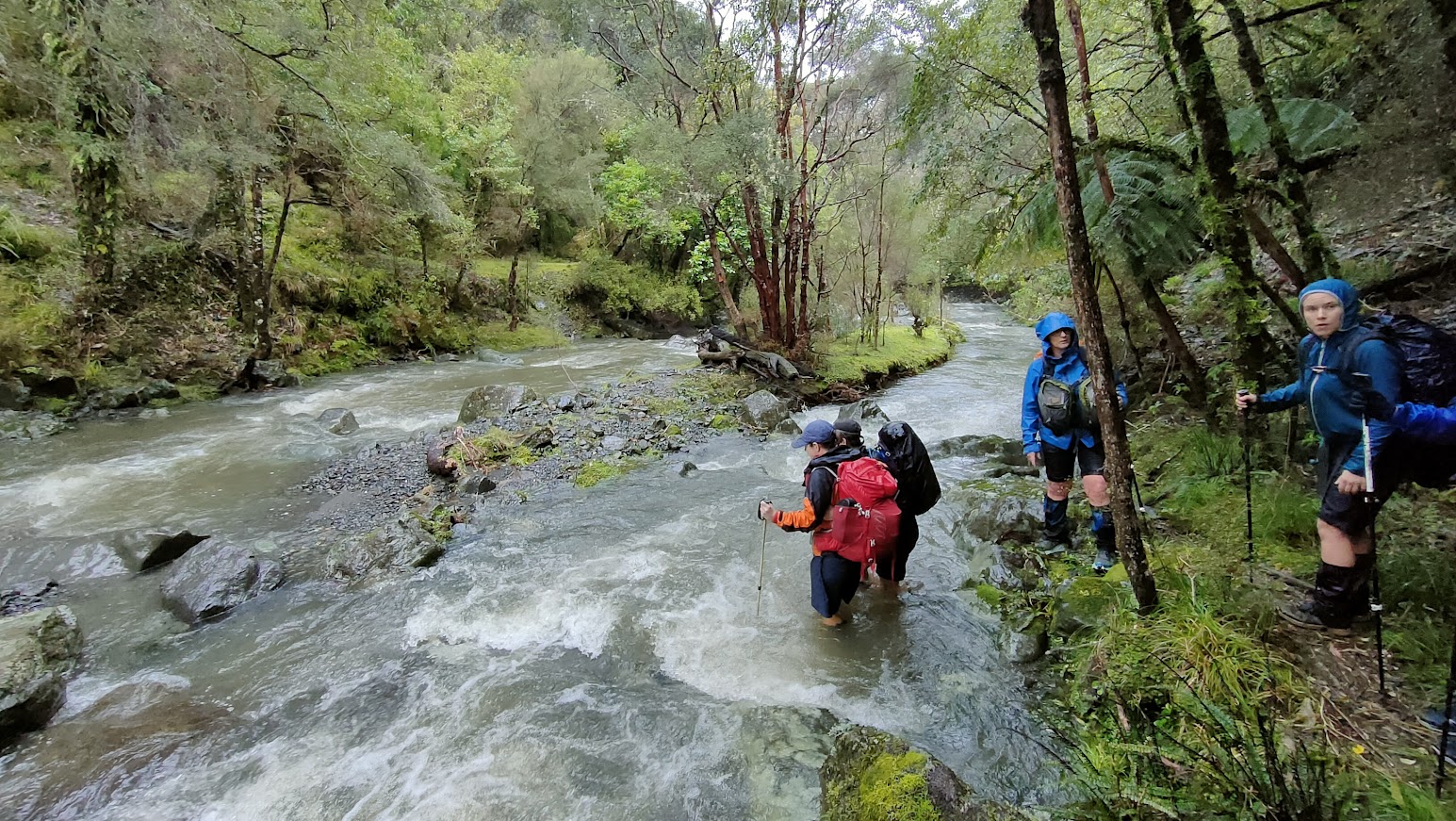 “Not all fun is created equal:

– Type 2 fun is miserable while it’s happening, but fun in retrospect.

After the trip was canceled once, and then twice, Tash was determined to lead the Aorangi Crossing. On her third attempt, she promised 7.5-8.5 hrs walk each day, steep uphills and downhill descents, and warned us we needed to be fit enough or the trip would blow up into a MF trip. Five of us felt brave enough to join her. Since Harry’s group of two didn’t have a driver, it was agreed Maarten would kindly move the van for us, while Harry and Elisabeth would walk the crossing in the same direction as us, but separately.

We all naively gathered at the train station for a 7.10am departure, unaware of what was to come. Maybe we should have seen the signs when we found out the tank of the van had been left completely empty, and the club fuel card got declined. But we didn’t, and after filling up with diesel, off we went over the hill and along the coast. We parked at the Pinnacles carpark and headed-off at 9.30am, the sun shining over our heads.

The walk started off pleasantly enough, it was not particularly steep and we had beautiful views of the Pinnacles from the look out. We continued on a very pleasant and soft track that seemed too good to be true. Eventually the track started to get steeper and clouds came overhead. It started spitting, and when there was a break in the rain and we managed to get up to the first peak we stopped for lunch. After lunch it quickly started pouring and we commenced the first steep descent to Washpool Hut.

At Washpool Hut, knowing that we had another steep ascent (another 500 metres)  and descent (300 metres) to the next hut, and it was getting well into the afternoon, Harry decided to spend the night at Washpool and Elisabeth decided to join the rest of us to continue the crossing. We crossed the river, with Cate managing to get stung by the OngaOnga for the second of the many times on the trip and started the ascent. It wasn’t really a track, it was more a matter of finding any vegetation we could cling onto to pull us up the hill, but it was nice knowing that we got the first 100 metres out of the way very quickly. By the time we got to the descent, it was getting dark and was super muddy and slippery and only Anne and Emily managed to get down to the hut without a muddy bottom.

We arrived at Pararaki Hut having only needed headtorches for 20 minutes and were pleased to find it empty. Much wringing of soggy clothing, fire starting, vegetable chopping and hot drink slurping ensued. Dinner was delicious as it always is after a long damp day in the hills. The hut was toastie warm having got the fire pumping and we all settled down for a good night’s sleep.

During the night heavy rain could be heard on the roof…this went on much longer and was much heavier that we had anticipated from the forecast and it was still raining heavily when we woke up. We eventually all pulled on our still soggy tramping clothes and prepared for a wet walk out via Kawakawa and Mangatoetoe huts. This is where the fun started – different types for different members of the group – see definitions at start of this report.

The creek outside the hut had turned brown in the time since we’d collected water earlier that morning. It was still a fairly simple crossing, but we linked up given we couldn’t see the bottom. Then we had a short (but felt long!) climb and descent into Otakaha stream, where we had to execute a couple of other linked-up crossings. We were starting to get into a bit of a rhythm linking up in twos or threes.

About 11am, we made it to Kawakawa hut so it had taken us longer than anticipated and we were all pretty chilly and soggy from the ongoing rain. Snack or lunch time depending on what each group member fancied.

…until we reached the first of the next river crossings. We were now working our way upstream and there was a fair pump to the river. It wasn’t possible to cross where the track met the river so we scouted down a bit more to find a possible spot. For maximum steadiness, we decided to link up as a seven and braced ourselves for a waist-deep crossing. Crossing this one felt like we’d nailed the crux of the trip but within a few minutes we were needing to cross again, and again, and again as we worked our way upstream. Each crossing point needed some scouting and decisions as to whether it was doable, and what combination we linked up in. Most of them we managed in one group of three and one group of four. At least one person’s feet were floating on at least one of the crossings and there were some with tricky boulders to negotiate our way around.

Progress was extremely slow compared to our estimates, especially as the bushbashing on the river bank was often not straightforward. We stopped for a very quick lunch sometime after 1pm realising we all needed some energy, but carried on moving as soon as we could because there was a bit of shivering and even one set of blue lips starting to kick in.

After we’d rounded the next corner the route takes a side stream so the water levels dropped a fair bit and travel became easier and quicker. And we all warmed up somewhat with the additional speed and the 100m climb to get over the saddle and into the Mangatoetoe Valley.

As we descended into the valley, we were all hoping that the fact it had stopped raining ages ago and that the catchment on this side was small would mean easier crossings. Indeed the crossings in the Mangatoetoe were much easier and we were finally moving at more like our anticipated pace, although everyone was getting a bit weary. We arrived at Mangatoetoe hut about 5pm, already hours past our expected finish time and facing more walking in the dark. After a quick snack we stashed headtorches in reachable pockets and got going to make the most of the daylight we had remaining.

A bit more than an hour and a half later we arrived at the road bridge having only had to do one river crossing in the dark on the final section. The van had kindly been moved for us – thanks Maarten – and we were on the phone to the weekend emergency contact as soon as we hit cell reception along the coast road. The club systems had already kicked in as we were more than an hour after our ‘raise the alarm’ time indicated on our intentions sheet so everyone was pleased to hear all was well. We picked Harry up along the way – he had made his way out safely from Washpool Hut and spent the afternoon lounging in the sunshine, only starting to get slightly concerned when we still hadn’t appeared as it got dark.

All in all, this trip was a great adventure and pushed many of the group into new tramping skills territory with all the practice at river crossing, much longer days than anticipated and some ongaonga identification tests. Everyone reported back as being either Type 1 or Type 2 fun so good to hear there were no Type 3s! Big thanks to Tash for persevering to get this trip off the ground on the third attempt and for leading us all through a challenging but fun couple of days.

Kawakawa to Mangatoetoe hut: 6h30 (including many, many river crossings, a decent amount of route finding, and lunch)