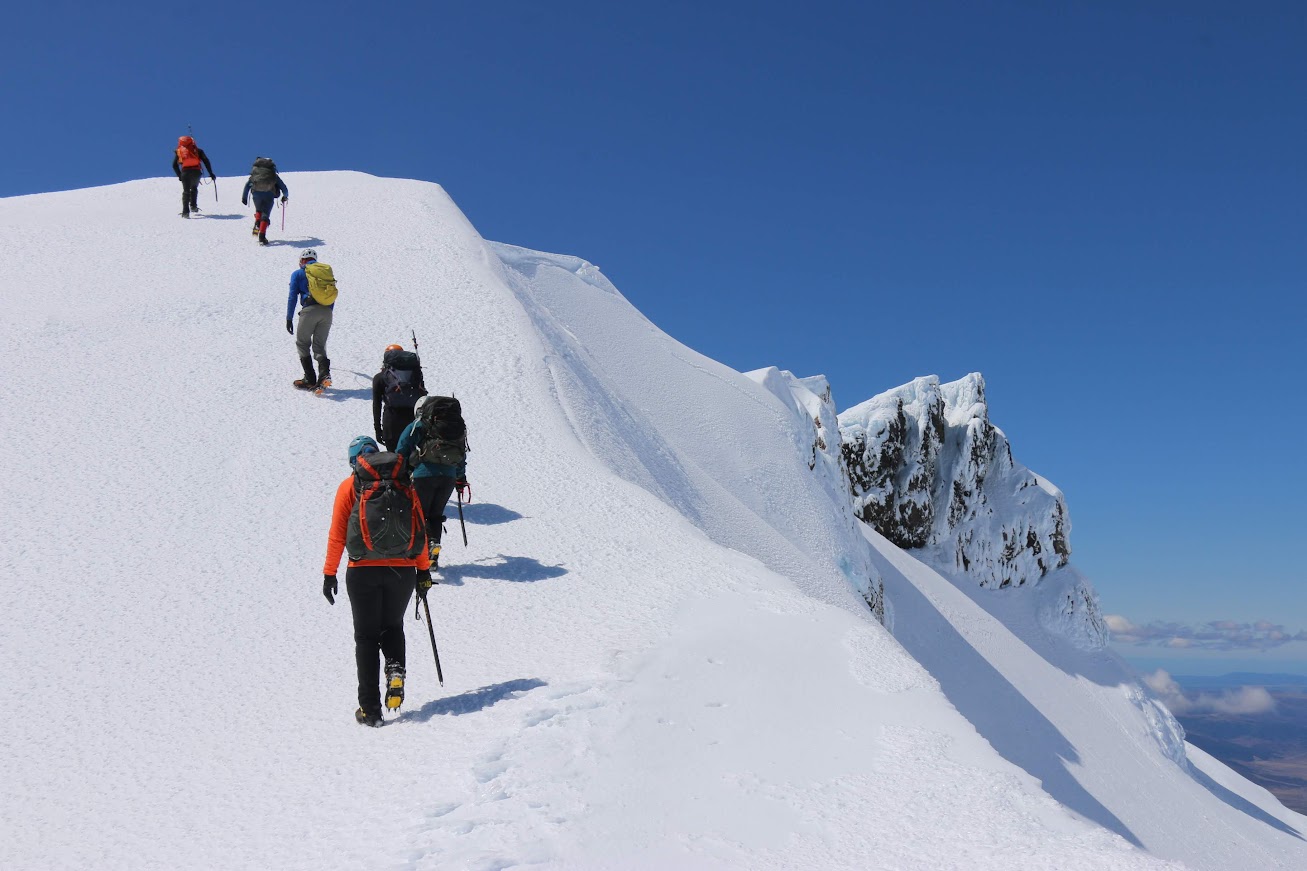 Seven keen alpinists departed the railway station on Friday, chasing a stunning forecast promising bluebird conditions on Ruapehu. After a cosy night in the well-appointed WTMC lodge, the group made early progress up the hut ridge in the golden light of dawn. Wispy cloud and rays of light played about Ngauruhoe and surrounds. Some truly spring-like weather made for a toasty ascent and just a light layer or two were needed.

After reaching the NZAC hut, crampons and ice axes were donned and the group scaled slowly up the ski fields, past the Far West T-bar and onward up the Whakapapa Glacier. Snow conditions were great and made for easy travel in crampons. Once we neared the exclusion area of 700m around the crater lake, we had a first lunch before cutting back and around the ridge leading directly north from Dome (2672m). By this time it was approaching the middle of the day.

Coming down the ridge close to Point 2642, we dropped onto the Summit Plateau, where it was impossibly warm. Any last layer above a base layer was packed away and clear expansive blue skies let the sun dance across every feature around the basin. We looked out to Te Heuheu and Tukino Peak and their dramatically different shapes – Te Heuheu a wide arching, towering half-dome and Tukino Peak a sharp and jagged face of rock and ice with a few shelf-like teeth extending off to its eastern flank.

We ambled along toward both peaks, not sure whether we’d have the time to ascend those heights in the time remaining in the day, leaving ample time to plod back down the ski fields and to the lodge. Good progress was made however and plenty of sunlight remained. After a few huffs and puffs and many photo opportunities, we successfully reached both Tukino Peak and Te Heuheu, stopping a mindful distance below their true summits. Both maunga command an expansive view across the plateau and surrounding peaks of Ruapehu, as well as down to Ngauruhoe, Tongariro, and even as distant as the cast-away Taranaki, its ice-capped jagged peak faintly ascending above the horizon.

Content with a big day that would approach about ten hours by the time they reached the hut, quick progress was made down the ridge of Te Heuheu and back down the Whakapapa ski fields to the lodge. A shared dinner, many teas, and one glorious sunset later, we rested up and left deciding the final Sunday plans for Sunday morning.

On Sunday, the group split in two, one home team and one away team. The home team wrapped up matters at the lodge, tidying, relaxing, and chatting away about the day prior. Photos and laughs were shared over coffee, tea, bikkies, first and second breakfast. Meanwhile, the away team took a journey over the lower end of the Pinnacle Ridge down into Whakapapa, clambering over the rocks of the ridge, gradually ambling down to the village where the home team would pick them up a few hours later. By the early afternoon we set out together back to Wellington, feeling elated and fortunate with a great alpine trip so late in a testing and temperamental season.