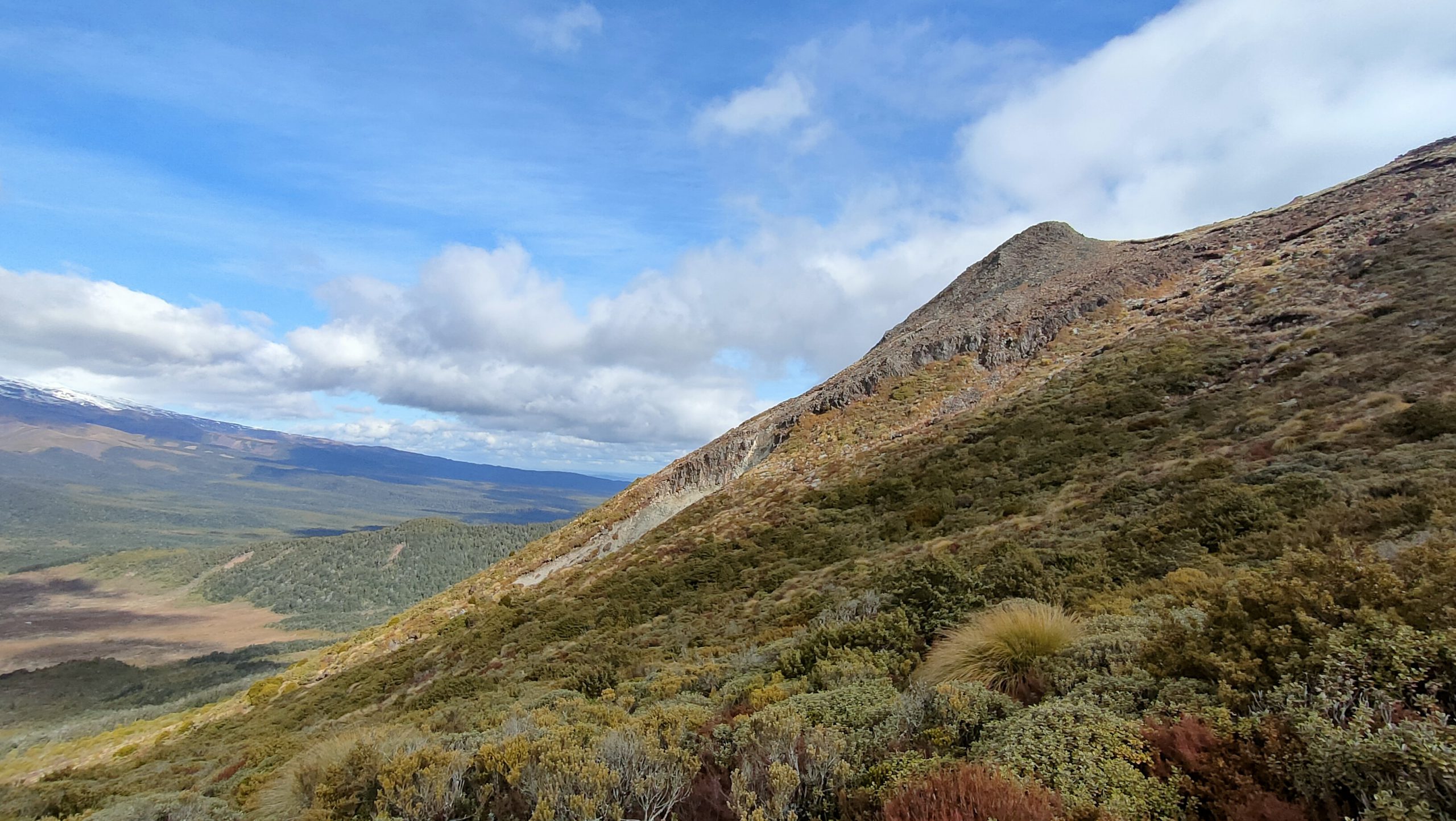 The idea for this trip came up as I was looking for off the beaten track options to put on the trip schedule. I remembered seeing this video of Sarah adventuring through the Hauhungatahi Wilderness Area, and found this old trip report on the website. Good enough to hatch a plan.

While I was confident I could lead it, navigating off-track for two days and having to pick a route in the open space was fairly new to me. A google search returned a number of results, reports from other tramping club trips and old forum posts, a Wilderness Magazine article. Asking around for tips from others who had all been there also proved to be very useful: Sarah’s number one tip was to bring gaiters to protect our legs from the harsh vegetation, Tony G offered some tips on potential campsite locations, and both of them as well as Emily warned about the challenge that the stream crossings would pose.

With all that information on hand, I decided to keep things simple: we would go in from Mangahuia Campsite and do an out-and-back trip to the summit. On the first day we would walk past the streams, set up camp by the tarns and travel light to the top. This would also mean an easy, shorter day on Sunday and early return back to Wellington.

After a warm night at the backpackers in National Park village, we drove to Mangahuia campsite, and started walking at 7.50am. A good hour later, on a fairly flat and easy track, we crossed the Mangahuia Stream and kissed our dry boots goodbye. Another 15-20 minutes and we left the bush for the open tussocks, ready to head off track.

Looking at the map, we decided to more or less hug the bush edge to avoid covering more ground than necessary – which in hindsight was not the best idea! I had been warned that crossing the streams was “more luck than good management”, and as we attempted to cross the first stream we quickly found ourselves scrambling down a very steep gully. As we came back out on the other side, we braced for the three other streams ahead of us.

We reassessed our route to try to stay away from the bush edge and avoid the deeper gullies, and decided to take a bearing for good measure. We would head ‘that way’, ‘towards the big tree next to the small tree’. This was the first of many convoluted tree descriptions to somehow build a common understanding of where to go next.

Traveling across the flat sections was fairly straightforward, although a bit awkward as the ground was uneven and the bushes aggressively scratched our legs – despite wearing gaiters. We got across the three other streams after some more scrambling, bum sliding and bush bashing through high vegetation – but without major issues.

We next headed towards the tarns, on the lookout for a good space to camp. As we got closer, we identified a spot that matched Tony G’s suggestion and must have been used by campers before (rubbish included…). It could have been a good option if the weather hadn’t been so wet in the last week, but it was saturated with water and didn’t look very appealing. We dropped off our packs and looked for a better spot near the tarns before giving up. Tony S suggested we try our luck a bit further to see if we could find a drier spot near the stream, at the base of Hauhungatahi. The terrain wasn’t looking much better as we got closer, and I started doubting our decision when we stopped at the stream for lunch. However after mulling over a few options we agreed to set up camp there, on a couple of flat-ish and dry spots.

With the tents set up and most of our gear inside them, we headed up the stream with light packs, just before 1pm. We made good progress traveling up the stream, in the river bed itself. As we made our way up, it slowly turned into a gorge with steep rock faces. We decided to give it a go and see how far it would take us. After a couple of dodgy sections that looked more like rock climbing than tramping, we made it out of the gorge and into thick bushes. The way to the ridgeline was a grueling experience – for me anyway – travel was difficult and painful on the legs. As Tony S put it, “the enjoyment was wearing off as the layers of skin were peeling away”.

All this hard work was worth it though – and the three of us felt a great sense of adventure and accomplishment when we reached the summit and enjoyed 360 views of Ruapehu, Ngauruhoe, Tongariro NP and its surroundings.

From there, we picked a different way down to join the stream again – which proved to be steeper but much easier to bushbash through. We quickly made our way back to camp and got there around 4.45pm.

We had an early dinner: five servings of backcountry dehy beef curry + extra veggies to share between the three of us, which was a bit short after such a big day. A bite of caramel slice, and we were tucked in our sleeping bags by 7pm as the evening turned dark and cold.

On Sunday morning, we opened the tents to clear skies and a stunning sunrise over the snowy tops. Greer found her socks and shoe laces completely frozen – highlighting how cold it had been overnight. We got up at 6.30am and had a slow morning, taking some time to warm up, packing up the tents and finding every excuse not to put our wet and cold tramping boots back on.

We finally headed off at 8.10am and started making our way back towards the stream crossings. With the fatigue from the previous day, traveling on uneven ground felt a lot more tiring than the day before. We decided to deliberately head even further away from the bush edge to avoid some of the steeper gullies as we crossed the streams again, took some more bearings and headed towards ‘that flat bush over there. No, not this one. That one.’ We carefully assessed the vegetation and slope gradient as we approached the streams, and with a few detours we managed to get across them without too much trouble again.

We made good progress but took longer breaks, enjoying the sun and taking in the views. Another piece of caramel slice, a few awkward falls and good laughs later we were finally back on the track – we were all pretty knackered and it felt good to know we were ‘almost home’. Another 1h30 on autopilot following the track, and we were back at the car, ready to head back to Wellington – but not without a chocolate eclair stop in Ohakune and the usual traffic hold up at the Ōtaki roundabout.

Leaving the track to campsite: 2h

Summit back to campsite: 1h30

(Total 9h with breaks, including lunch + about 30min looking for a suitable campsite + setting up camp)

Campsite back to track: 2h15

Allow some time to find a good spot – options are limited.

By the tarns could be an option in drier weather.

By the stream worked well for us, although a bit of a squeeze for a 2pp tent. With a bit of imagination there could be one or two other small-ish spots.

1 thought on “Hauhungatahi: Off the beaten track”