I was a bit concerned about the weather and this trip certainly had a reputation (as I had been told that the last Club attempt at the Pinnacles resulted in a trip turn-around due to weather). Nevertheless, once the trip was organised and food allocated, we met up at the train station on Friday night and shared a van with Jon’s group, all of us heading to the Holdsworth roadend. We were lucky as at least two other planned trips for that weekend had been cancelled due to attrition.

The night was calm when we arrived and Jon herded his EM group to a campsite at Holdsworth. The area was pretty busy as the Holdsworth circuit run was on that weekend (including two coffee vans!). Our group (Simon, Kerry, Mike Leon, Jim and Dave) headed off to Atiwhakatu Hut, which took us under two hours, walking over a series of bridges over black yawning chasms (which was quite fun in the dark!).

That night there were only two other people in Atiwhakatu hut so we prepared for the next day (it was looking to be a big one). The next morning saw wardens bustling in with radios and gear to facilitate the race. We watched a few intensely focussed grim-faced runners pass, then headed down the next section of the track – which was a different story to the first part of the track and a bit challenging. The uphill up to Baldy was a bit of a grind and it was great when the bushline came in sight. Up on the top of Baldy the day was calm with little wind.

The track was pretty clearly defined where other people had been, so we passed Baldy and broke for a bit before tackling the climb to South King. We saw a couple in the distance heading up towards South King peak towards Middle King and later figured this must have been Paul and Sharon from the Club (who stayed at Mid King Biv that night). The walk was dramatic as the ridge was occluded by cloud only on the South side – the North side had cleared completely by the time we were halfway up (that last 200m was a grind). Once we were there we were stoked, and had a good look around – the views of Dorset Ridge Hut and Girdlestone (and beyond) were great. 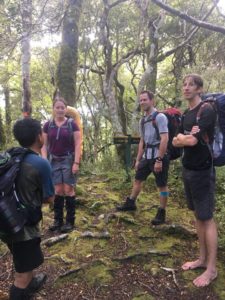 After another break we headed down wondering where the hell these infamous pinnacles were, as they weren’t immediately obvious (at first!). Dave (barefoot tramping) led the way over a track that dropped down from the ridge to the left at the largest pinnacle (very clearly marked, thanks a lot DOC), to rejoin the track again after sidling for about 20 minutes. We were glad the snowgrass and rock was dry…..The pinnacles were pretty majestic, rising up from the ground as great slabs of rock that reminded me of Fiordland. 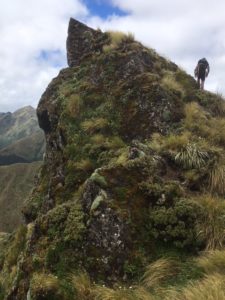 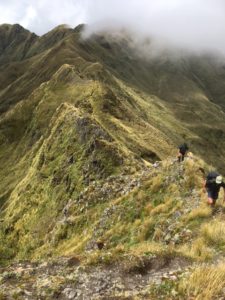 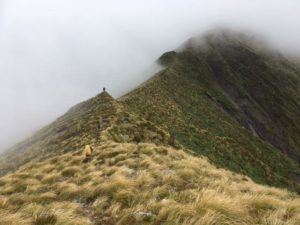 The last uphill that day was up McGregor, immediately after this we collapsed for lunch (topped off by some of Mike’s highly suggestive lollies), looking down at McGregor biv on the left (I really, really want to visit that biv now!). It still looked like such a long way to Jumbo Hut (which we could see from the pinnacles at the end of the great curving ridge). However the last part of that trip just flew by, compared to the first part. In all that day from Atiwhakatu to Jumbo probably took 8 hours or so. Jumbo was equipped with gas cookers so that night we fired up some tasty satay noodles for dinner. The hut was about 4/5ths full, with a good bunch of people also staying.

We did consider heading down the Holdsworth-Jumbo circuit the next day but figured that the Saturday had been so great and we had achieved what we wanted – so there was no pressure. Plus the wind was expected to blow like a bastard – which it did right on cue from about 9pm that night, shaking the hut quite a bit.

The next day was the simple “Plan B” drop-down from Jumbo down Rainguage Spur track (very straightforward), and back to the van to meet Jon’s group. We left to drive back home around midday.

What a blast and thank you guys for an excellent trip, we couldn’t have had a better and more experienced team. I was also blow away by Dave’s barefoot tramping – its pretty incredible to see this for yourself. 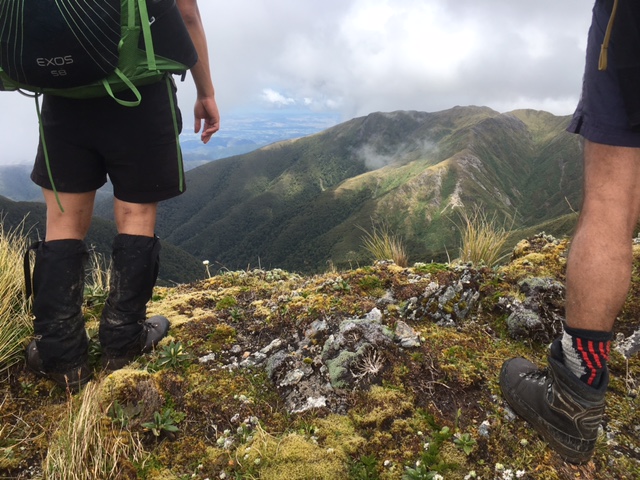