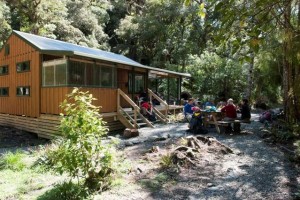 One of the easy aspects of this E/M tramp was the Friday evening to sort out your stuff and fill your pack, although a little voice in the back of my head kept telling me we had to get up reasonable early on Saturday. Indeed the alarm went off shortly after 6AM, allowing us to assemble at the train station around 7.30. With the van being manoeuvred easily across the Rimutaka Hill, we arrived at Holdsworth Lodge and were all ready to go at 9.30 am. The weather was very promising with a clear blue sky and hardly any wind. Maybe soon the nights would be spent under a fly again. Totally convinced that spring was in the air it was tempting to leave some heavy clothing behind, but we decided not to, as you never know in the Tararuas.

We got a bit worried when we saw the amount of cars parked at the end of this school holiday. Dozens of people already appeared out in the hills on this nice and sunny day, but hopefully many just walking their dog, or running up to the outlook point. Jumbo is quite a big hut, but still….?

To spread the risk of finding overcrowded huts we had already agreed to some alternative plans for this trip: three punters would occupy strategic bunks in Atiwhakatu Hut, one punter would distract other tramping groups and send them up the Baldy spur to the Pinnacles, and the main six-pack would run up Raingauge spur straight to Jumbo Hut and block the front door.

Whilst Hans set out at a steady pace to Baldy, Mid King and Angle Knob, the rest of the group enjoyed the stroll on the fairly easy track along the river. We were informed by Doc that one of the bridges couldn’t be used since the last heavy downpour, as a slip had caused foundation instability, but this proved to be no serious issue. Around noon we had a leisurely lunch at Atiwhakatu. Snaiet, Colin and Deborah would spend their night here and they were indeed in time to claim some comfortable bunks.

The planned run up Raingauge Spur turned out to be rather challenging, with most of the team taking their time for the exercise to get up to the bush line. One social convenor (no names here!) sprained her ankle and got more value for money out of her trip, at least in walking hours.

The last part of the climb to Jumbo Hut was definitely less enjoyable for her which made the arrival at the almost empty hut very welcome. It also made a good opportunity to check the contents of the first aid kit, which was well appreciated for its bandage and strapping tape, allowing Mika to demonstrate her strapping skills.

In the course of the afternoon more people trickled into the hut, and various parties moved around the dinner table to prepare and eat their dinner. Our bunch had cut the veggies and counted the nuts and couscous grains at the time Hans walked in around 6.30 pm. Although he had not been able to divert any trampers away from Jumbo as planned (having seen nobody since leaving Atiwhakatu) there still was a mattress free and dinner was nearly ready – good timing! It had been a bit windy on the tops but the scramble along the Pinnacles was not too hard and resulted in a good appetite. Today’s dinner special was Moroccan nutty chickpea couscous, making many others in the hut a bit envious…. which got even worse when we had warm custard with fruit cake for dessert.

Apart from the early warning at 6 AM by some ringtones, Sunday turned out to be one of these lovely mornings with a perfect sunrise, with people outside on the deck squinting to see some of the Wairarapa plains and the ranges beyond.

The plan for the day was to walk uphill, turn towards Mt.Holdsworth to enjoy the good views and then head down along East Holdsworth Track to meet the other group at the carpark. It’s probably fair to note that the speed of progress was very high for someone with a sprained ankle, but obviously there were a couple of walking hours in between us and the carpark. Several ideas involving wheelbarrows, paragliders and other alternative forms of transport were discussed, but Donna definitely won the tough gal trophy for pretending being cheerful on the steep slopes and continuing walking all the way. In the meantime Ian had the opportunity to make carefully considered photos and Hans opted for a power-nap on a particularly inviting blanket of soft dry moss in the sun.

The team from Atiwhakatu Hut had made their own choices: Colin and Deborah had taken a detour up to Mountainhouse shelter and then down along the Gentle Annie track. To their surprise they found Snaiet at the lookout, halfway Gentle Annie. She had walked out to the roadend, dropped her pack, and then decided it was a perfect day to enjoy the views and too early to leasure.

Although the last ones to arrive at the roadend were slightly delayed for the 3 pm meet, nobody really bothered as the soft grass and the sun were good company. At the end of the day there were ten punters again, sun tanned and grinning satisfied, and only an occasional sandfly. It felt good to have been out again, enjoying the Tararuas on two nice days.

We later heard Powell Hut had been very busy with several trampers coming in very late and the whole floor space occupied. Atiwhakatu had been filled with a couple of families and Jumbo was also pretty packed, but fortunately neither of us needed to sleep on the floor or outside. So probably in the end our plans had worked!?