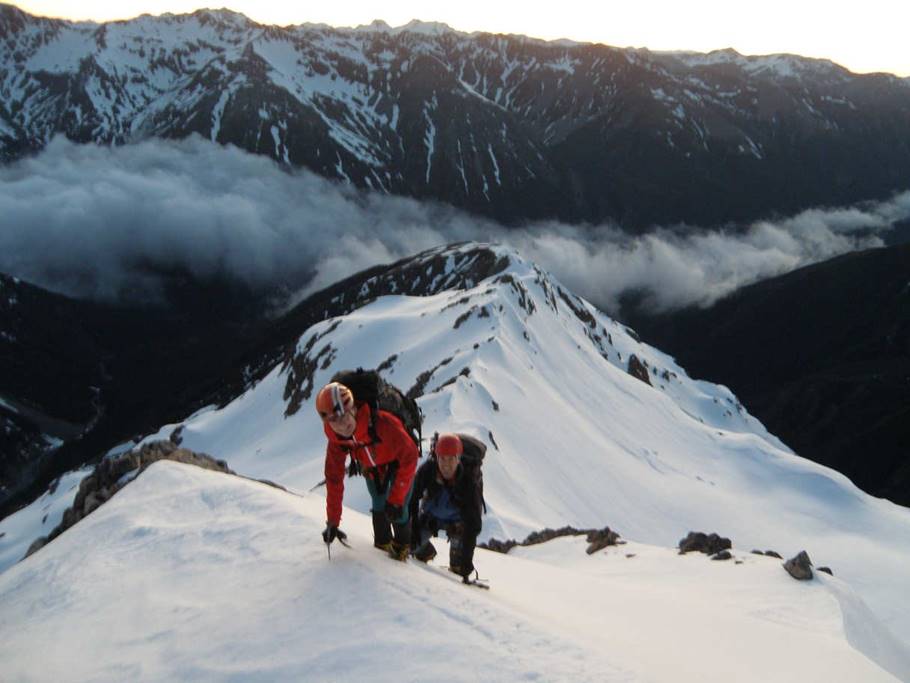 Accompanied by a light westerly and drizzle we pulled our packs out of the car, switched on our head torches and headed up the Coral track. This could be a short, steep, sticky night time jaunt to the bush line and back if the wind doesn’t abate we joked, philosophical about our chances. Unlike previous evenings there had been no overnight freeze and with temperatures soaring to the mid twenties most afternoons during the week, our chances of encountering favourable snow conditions higher up were not great. All the signs pointed to the need for a genuine alpine start and therefore we had set our alarms for 2am, only it didn’t feel like 2am because it wasn’t cold. Sweat dripping off us we trudged upwards shedding clothing at regular intervals. Clear of the bush line but still in darkness we cast around for the appropriate route trying to gage where the ridges were and the general direction of Rome ridge, the classic summit route to the low peak of Mt Rolleston (2212m).

As we continued to gain altitude the sky gradually lightened as the stars faded. No sign of the wind as we crossed isolated patches of snow which was, much to our relief, reasonably firm underfoot. At about 6am an orange circle peeped over the horizon indicating that sunrise was imminent. A little higher we paused for a snack and to admire the herds of snowy peaks emerging from the gloom like ghosts, backlit in orange then pink. Higher still the rosy light softened the steep looking face of the Low Peak, a lot closer now. First though we had to plod our way up a steep gully. Mike made steps and we used both our ice tools to follow him up and onto Rome ridge.

Rome ridge is all graceful curves offset beautifully by precipitous drop offs, the surrounding peaks and a big blue sky drained of both stars and clouds. The westerly rejoined us. Not strong enough to necessitate a retreat but a reminder that gale force westerlies were forecast for later in the day. We pushed on along the narrow ridge for a bit before DJ directed Mike to traverse to the east with a view to finding a way back up to the trickiest bit of the climb where you need to negotiate the gap between the ridge and the bottom of Low Peak. At this stage Steve and I decided to retreat leaving Mike and DJ to continue.

We were soon back on Rome ridge and descended slowly enjoying the spectacular views and occasionally turning round to monitor the progress of Mike, DJ and a team of 4 from the Canterbury Mountaineering Club who had caught us up. Soon we spotted our guys, tiny specs of black ascending steadily up the Low Peak with the CMCers not far behind. Steve and I were glad everyone had successfully negotiated “the gap”. We knew because of the speed with which the figures had appeared that a rope had not been necessary. Later Mike and DJ confirmed that there was nowhere suitable to place an anchor. Probably a good thing Steve and I turned back then…

At about 9am we observed Mike and DJ summit the Low Peak. Steve and I continued our leisurely descent enjoying the tranquillity of the mountains, watching a pile of clag roll out below us from the West Coast towards Arthur’s Pass village like a giant fluffy carpet. By the time we reached the car park at 10.15am the clag had burned off but the westerly was gradually strengthening. We headed into town for morning tea then back to wait for Mike and DJ.

At 2pm just as we were contemplating abandoning our cramped positions in the car and absconding for a third lunch we heard the familiar crunch of tramping boot on gravel and turned around to see a grimy, weary duo approaching. They had descended down the Otira Slide rather than Rome ridge necessitating a 3 kilometre walk along the road to the car park. Still their big grins left no doubt that they were well satisfied with their efforts. 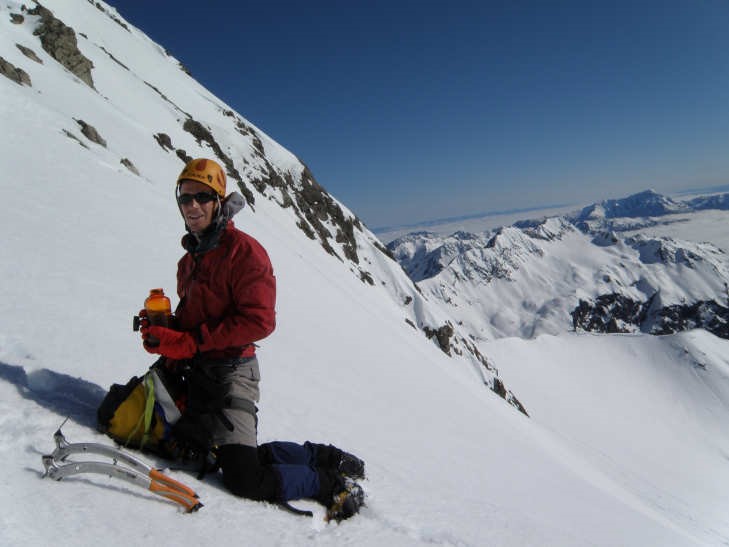 The westerly started to muscle up in earnest and turned nor-west sometime in the night and with this change came the rain. Next morning we braved the deluge to visit Geoff and Renee at their new Bed and Breakfast in Arthur’s Pass village. They have a lovely spot in an amazing place. If you are down that way go visit, or even better book in to stay with them. They sent us pictures on Monday after the southerly came through – snow all over the ground. That is Arthur’s Pass for you – a place of extreme beauty and extreme weather – sunny with mid twenties temperatures one day, strong winds and rain 24 hours later then snow. It is probably sunny again now.

Thanks to the team – David Jewell, Mike Phethean and Steve Austin.

Special thanks to Geoff Keey and Renee Habluetzel for morning tea, the grand tour, great stories and good beta on snow and route conditions.