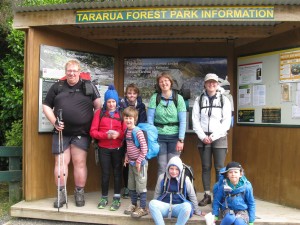 For once the Metservice long term weather forecast for the Tararuas was accurate, promising a three day potpourri of sunshine, gale force winds and heavy rain following on from a snow storm on the Friday. This necessitated a change from the original plan of the Jumbo-Holdsworth Loop due to the gale force winds on the Sunday, and after a few emails to the emergency contact person (thanks Sarah) our final route was organised. 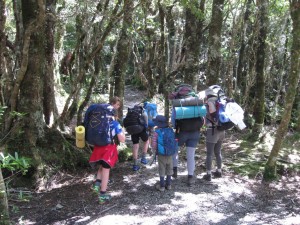 The relaxed tone of the weekend was set by myself arriving at the Holdsworth carpark late (well I did have 3 packs to organise). The tramping party had a real mix of experience, some on their first or second overnight tramp and the others having done somewhat more. All the kids carried a pack of their personal gear, while the two oldest also carried some group gear or food.

After some last-minute adjustments we were ready to go. The leash was released and the kids raced on ahead with instructions to stop at each track junction and wait for the adults. The older kids made sure they did, and the whole 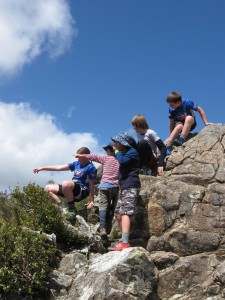 party made reasonable time up the well trodden path to Rocky Lookout. We were far from the only people on the track up the hill. The window of fine weather also encouraged large numbers of day walkers and trail runners out as well. Blue sky, sun and warm temperatures brought out the cameras and water bottles, while the kids utilised “Rocky” of Rocky lookout.

Despite (or maybe because of) seeing the shining roof of Powell hut above the bushline off in the distance, we were off again, with the kids up the front again only to stop again at the Totara Flats track junction for a short lunch stop, then on further along the new benched path to Mountain House shelter for another scroggin stop. The climb steepened up and the new stairs installed by DOC with their giant steps for shorter legs barely showed the kids down. The last 100m climb to Powell hut when out of the bushline is 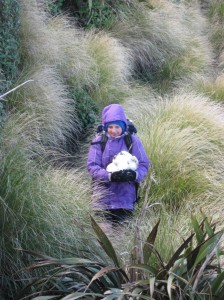 always seems five times longer than it really is, tempered by the views down the valleys below and to the snow dusted ridges above. About four and half hours walking to Powell hut. Already the hut was filling up fast, eventually 36 people would cram into the hut.

Later the party made a trip up the the High Ridge junction for a quick play in the melting snow and increasing wind with Ella managing to bring back a large snowball to throw at her father or brother, depending on who was unfortunate to get in the way.

With a birthday party underway in the evening and the gale force winds developing further overnight there was a distinct lack of sleep that night and it was with some relief to be off in the morning to Totara Flats hut. 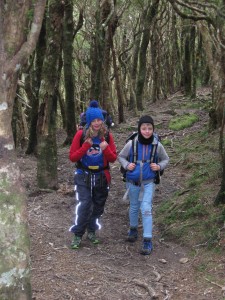 The winds and mist abated as we descended back down through the bush to the Totara Flats junction. The kids happily took to the much more traditional roots and mud of the Totara Flats track and we moved at a good pace down the hill before meeting the new all-weather track that traverses along the ridge before descending down to Totara Creek. The only concern we had was that the swingbridge over the Waiohine river does move around in strong wind, but we met another family group heading out to the carpark that had crossed the bridge earlier so we carried on. Upon reaching the bridge, the kids simply timed their runs across the bridge between the wind gusts that funnelled down the valley and a couple of minutes later we were at the surprisingly quiet Totara Flats hut after about five and half hours walking 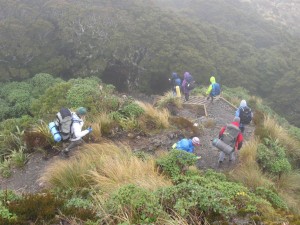 ith a large part of the afternoon remaining the kids were dispatched outside, with one or two braving the freezing river, others with pocket knives to find suitable marshmallow toasting sticks, followed by long games of cards in front of the fire. After dinner a large packet of marshmallows was rapidly incinerated by five eager (and apparently still hungry) kids. With a quieter hut and two days tramping the kids were off to bed early followed by the parents not much later. 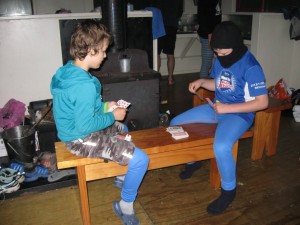 Overnight the expected heavy rain dumped on the Tararua Ranges and the Waiohine quickly rose over three metres to fill the gorge with raging brown water. We delayed leaving the hut until late morning to avoid the worst of the rain. While the rain had reduced to the odd shower, each tree bumped generated its own mini-shower, a trick that a certain brother and sister played on each other and me repeatedly. Walking across the swingbridge with a flooded river speeding past that much closer underneath your feet was somewhat disorienting. 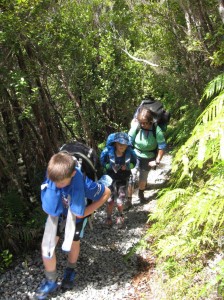 The walk out went by quickly, retracing our route of yesterday. The track of the final climb up to the Holdsworth track was converted into a continuous series of mini-waterfalls with all the overnight rain and Ella took great pleasure in splashing me with each puddle. Soon enough we made the track and the steady downhill back to the carpack and a well deserved ice cream. 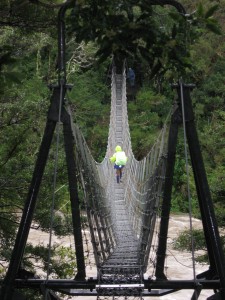 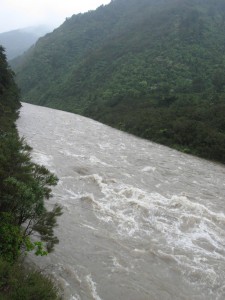