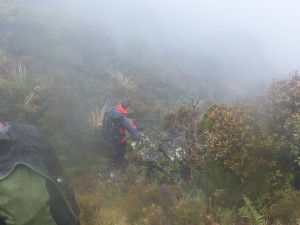 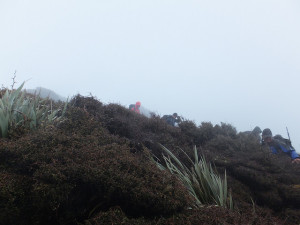 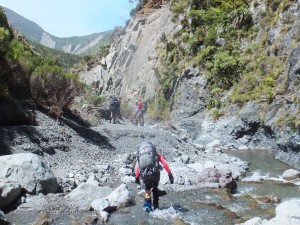 Six of us departed from platform 9 Friday night with a windy but rainless weekend predicted for our attempt to do a fairly involved navigational effort from near paua hut over the main range to the southern coast for a saturday night camp, returning Sunday via south saddle.

I considered discussing the legend of the fabled Orongorongorangutang, but two of the punters were fairly new and looked nervous enough at the prospect of spending 2 days offtrack, I decided not to burden them with the knowledge of this grim fable.

We stopped briefly in Petone on the way to the Rimutaka forest park and made quick progress to Paua hut were we bivvied for the night. We were woken early by a big Westerly gale, it was so strong we decided to take a safer crossing, opting instead to go over mount Tapokopo (behind paua hut) which would not expose us to traversing big bluffs in high winds, as the original route would have.

We headed up the steep reasonably marked route behind paua hut onto Tapokopoko, the going was fairly easy in spite of the high winds.

We would occasionally catch glimpses of a man sized figure moving ahead in the bush at great speed, only to vanish into the dense undergrowth silently and stealthily, was it real or a dark specter of wind driven clag and scrub. 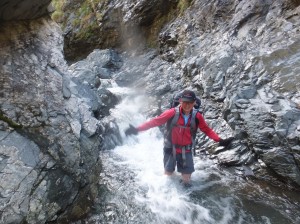 After summitting Tapokopoko we headed north along the main ridge for about 600 meters, we made good progress in spite of some fierce scrub and high winds. We dropped east off the main ridge onto the top of a huge scree face which we ‘surfed’ down into the Tapokopoko stream. Interestingly we still caught the odd glimpse of the shadowy figure powering down the scree face ahead of us only to vanish into the clag and scrub when we looked. 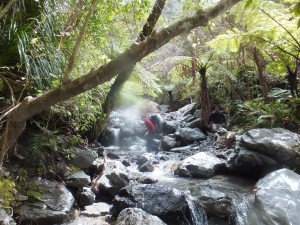 At the bottom of the scree face was the mother of all waterfalls, we backed up a bit and spent the next half hour sidling round to the right of it before getting into the stream which was fairly easy travel in spite of the many and very large patches of Ongaonga.

As we headed down the stream we encountered human sized footprints – heading downstream only, this was the first physical evidence we found of the shadowy figure we had seen all day, we assumed it was some shy serious speed tramper charging ahead avoiding our company, but the speed of the brute and the size of the footprints convinced me that we were on the trail of the Orongorongorangutang. 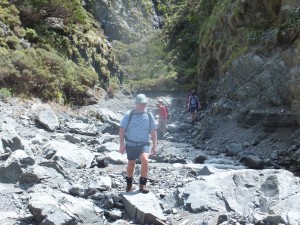 By midday the winds had dropped and we stopped for a well deserved sunny lunch in the heart of the Tapokopoko stream, it was now perfect spring tramping weather and we were all enjoying ourselves, in spite of our odd shadowy companion. Post lunch we headed down the remainder of the stream to the coast, all the way we saw the mysterious foot prints, losing them only when headed north to corner creek where we planned to camp for the night. The Orongorongorangutang must have decided to head south round the coast, we were glad to be free of this most mysterious companion.

We had the campsite to ourselves and spent the balance of the afternoon sunbathing on the beach, drinking brews, reading, relaxing and occasionally discussing our mysterious tramping companion. 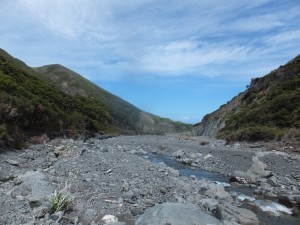 We slept well that night and rose to a lovely day and perfect sunrise, heading off for an uneventful tramp round the coast and up the mukamuka stream to south saddle, we saw no further evidence of the Orongorongorangutang and after lunching in the river we made our way back to the carpark.

Sitting down in the van we got the shock of our lives, on the windscreen was a huge sticky ginger pawprint, the Orongorongorangutang had been here before us leering into the van before vanishing back into the dark heart of the Orongorongas!