Summerlike conditions with bright sunshine and highs of early 20’s were promised and delivered for the weekend, and a couple of keen lads were ready to go. 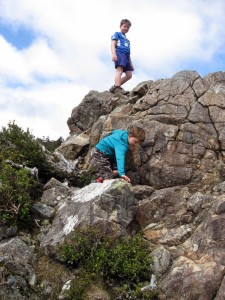 The track up to the Holdsworth/Totara Flats junction seems to have been continuously upgraded towards a metalled highway of constant gradient. In the warm weather, a break at Rocky Lookout was welcome for a drink and chocolate. Distant mountains were pointed out with suggestions of future family trips but Ollie and Theo were much more interested in conquering the local peak at the lookout.

Afterwards the gravel trail continued to wind its way around the spurs and allowed good progress. The Totara Flats junction now sports a couple of park benches over and above the existing logs, and it was a perfect place to stop for lunch for our group.

Stepping off the Holdsworth Highway onto the track towards Totara Flats couldn’t have provided a more stark contrast with the track full of roots and rocks and mud. Theo and Ollie quickly slipped into their Kevin and Jamie First Crossings adventure modes and their imaginations magnified every splash and jump hundred-fold.

After a 270m descent down towards the headwaters of Totara Creek, some sticks across the track and a couple of orange triangles that pointed left indicated the start of the new track opened by DOC. The new track follows the eastern ridge that runs parallel to Totara Creek, rising gradually over Pt. 575 before veering off the ridge and then down a spur. The track is an easily followed padded trail with occasional patches of gravel laid on the spur. Towards the bottom of the gradually steepening spur there were some impressive totara and rimu. About 60 metres above Totara Creek a new bridge crosses over a small creek and this proved a perfect opportunity to cool off. 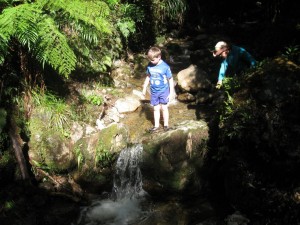 It’s always astounding how kids who immediately prior to stopping are flagging, complaining of being tired and hungry, suddenly burst into life with boundless energy to throw stones, chase sticks downstream and despite the coolness of the water, go for a swim. All without any addition of chocolate or sugar.

The new track then sidles around the next spur on a benched and stepped gravel track. An unmarked creek about 5-10 mins south of the first bridge proved the most challenging part of the trip. The creek is in a steep sided gully with loosely consolidated gravel and was a real scramble to get down and back up. Ollie somewhat unintentionally took down the fast way down, which was quite the surprise to him as one second he was on the track then next he was chasing his pack down the creek. A further 15 minutes sidling saw us dropping down to the new swing bridge over Totara Creek then it’s a 15 minute jaunt along the creek to the swing bridge over the Waiohine. Passing glimpses of the hut through the trees provide great motivation to tired legs to carry on a little further. The Waiohine swing bridge is long, wobbly and scenic, and a great highlight at the end of the day. 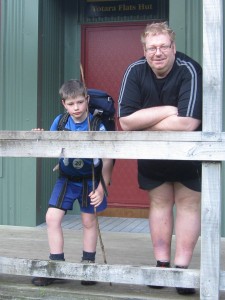 Totara Flats hut sits on a grass river terrace opposite where Totara Creek meets the Waiohine River. It’s a large hut sleeping 24 and the night we were there it was half full with a couple of young hunters, a fairly large party from Victoria University Tramping Club and a guy checking out his company’s work on the new bridges along the Waiohine valley. With some noise in the hut it took some time for the kids to go to sleep, despite the long day.

Overall we took 8 hrs from leaving the carpark to arriving at the hut, with about 5.5 hrs actual walking. One useful technique with getting kids to walk long distances is breaking the trip into bite-sized chunks with something different or interesting at the stops to take their minds off how far there is to go.

A sunny Sunday saw our party starting out early, so we would have plenty of time for an ice cream on the drive back home. We retraced our route from yesterday. The loose gravel scramble was a bit of struggle getting up for some. The climb back up the old track to the Holdsworth junction for lunch seemed to drag on and the park benches were a welcome sight.

Seven hours after we started we were back at the carpark having walked for about the same time as yesterday. Supervising two kids swimming in the river seemed like too much hard work so we settled for sitting outside in the warm sun with coffees and baking from Wild Oats Cafe in Carterton, which was a fantastic end to an excellent tramp for the family group. 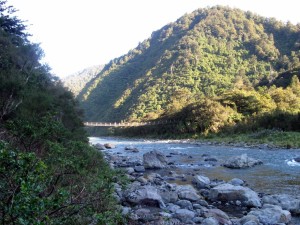