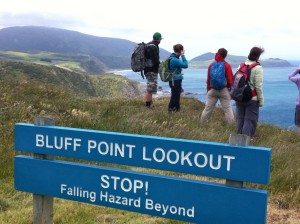 This trip report is brought to you by the letter ‘L’. L is for Lighthouse of which there were two. One was old and one was new(er). L is also for Lakes. Again there were two. One was circumnavigated and the second just viewed from afar. Finally, L is for Lunch – an important supporting character! Muritai Road in Eastbourne hosted the start line for what was a first with the club for a good proportion of the group. Our plan was a circuit to Pencarrow Head and back with some exploring of the various L’s on the way. The forecasted strong northerly was already blowing, so we knew the easy walk to the Lighthouses would be more taxing on the way back.

Despite being an ‘easy’ graded walk, the group set a fast pace along the flat and in well under two hours we reached the fork in the track which lead us up the hill to our first Lighthouse. The stile at the top provided a good breath-catching and view-taking-in point, while the accompanying signage (see photo) warned us to take caution as traps had been set for Australians – luckily we had none amongst us today so we were safe to continue. The top Lighthouse at Pencarrow provided great views across the Cook Strait and back onto Wellington and while the wind was certainly upon us, the sun was making a good appearance too. On to Bluff Point for more views, and a little bit of daredevil rule-breaking (se 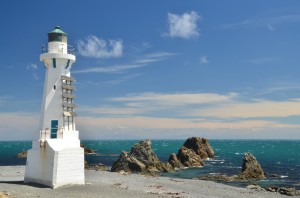 e photo) to get the absolute maximum from the land and seascapes before us.

We then took the path down to the first Lake in search of a sheltered Lunch spot. We found the perfect spot, guarded by a hawk which we discovered was coveting a kill…maybe not quite the perfect spot after all. There was lots of folding and unfolding of maps over lunch with particular interest in how far we’d get if we simply carried on around the coast. We also discovered one member of the party was in training and carrying 30kg of training weights – had we known earlier I for one would have happily replaced some of the dead weight with a flask of tea.

After Lunch we carried on round the Lake. It was now quite warm, and we had a small climb to come but this turned out to be very manageable. Back on the coast at the head of the Lake we waited for intrepid photographers to re-join us before heading back round the headland to face to the wind, passing Lighthouse number two on the way. The return leg was a bit of a slog into the wind, but we had jet planes to keep us going so spirits remained high. 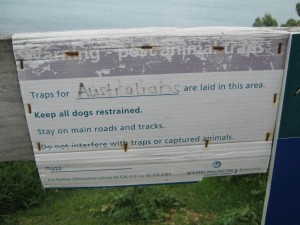 Afterwards, three of us opted for the ice-cream-extension, and I have to say the others missed out. Green apple and Tiramisu gelato from Eastbourne is not to be missed…especially when a bean bag is the available leg-resting seat of choice!
All in all a very successful walk exploring a nearby land which some of us had previously only seen from the city side.